The Great Migration: The African American Exodus from the South

Los Angeles Times Book review: "'The Warmth of Other Suns' by Isabel Wilkerson: Wilkerson's account of the exodus of African Americans from the South finds a poignant voice in three witnesses of the Great Migration who chart the turbulence of the journey and destination, by  Lynell George, on 9 September 2010  --  It was an all-too-familiar dispatch from a particular time and place.

The Clarks, a young black family of four, were trying to improve their lot in the world. Like many families just starting out, they were making do, but nursed desires: "The husband and wife were college-educated, well-mannered, and looked like movie stars. The father had saved up for a piano for his eight-year-old daughter . . . . He had high aspirations for their six-year-old son who was bright and whose dimples could have landed him in cereal commercials," writes Isabel Wilkerson midway through her new book, "The Warmth of Other Suns."

They found the perfect apartment: five rooms, modern and adjacent to city amenities. Problem was, the neighborhood was all white. On moving day, protesters would not let the family unload; the police stopped the Clarks at the door.

Weeks later the family tried again. This time, "a hundred . . . housewives and grandmothers in swing coats and Mamie Eisenhower hats showed up to heckle them. The couple managed to get their furniture in, but as the day wore on, the crowds grew larger . . . . A mob stormed the apartment and threw the family's furniture out of a third-floor window as the crowds cheered below. The neighbors burned the couple's marriage license and the children's baby pictures. . . . . They smashed the piano Clark had worked overtime to buy for his daughter and when they were done, they set the whole pile of the family's belongings, now strewn on the ground below, on fire."

Another antique report from deep in the American South? Not quite: This was 1951. In Illinois, the "Promised Land" of the North. This was the new start the family's patriarch, Harvey Clark, had abandoned Mississippi for only to find that the South — its reach and its beliefs — had tailed him.

Clark wouldn't be the first, or the last, to stumble on this truth. But it didn't stop him or the others who made up the multiple waves of migration by African Americans out of the South, led by nothing else but sheer will. All told, from 1915 to 1970, nearly 6 million African Americans made this trek, changing the face of the entire country.

"The Warmth of Other Suns," Wilkerson's lush, expansive and harrowing history of the decades-long exodus of blacks, which became known as the Great Migration, is a formal distillation of that protracted chapter when black people in the South disappeared, often under the cover of night, frequently leaving their sharecropper's tools in the fields, their future plans and whereabouts a mystery to those they left behind.

"What started as a march of the impatient," writes Wilkerson, "became a rite of passage, and would become the biggest under-reported story of the 20th Century." Émigrés made their way to cities that were connected via bus routes, rail ties, relatively well-paved roads, among them New York, Philadelphia, Chicago, Oakland, Los Angeles. It was an era in which little black children didn't play "Let's Pretend,".but "let's pretend we're leaving." The Warmth of Other Suns: The Epic Story of America's Great Migration, by Isabel Wilkerson

"The Warmth of Other Suns" — which takes its title from a Richard Wright quotation — is epic in its reach and in its structure. Wilkerson begins her vividly drawn narrative in the late '90s, sitting knee to knee with her aging subjects in the living rooms of their adopted urban homes. Their chosen big cities, they realize, aren't without perils — drugs, gangs, violence permeate the local headlines. They traded in their hardscrabble lives yet made tremendous compromises, leaving family and friends and all that they knew to gamble for something more: better jobs, living conditions and futures. . "To the old folks who stayed, [they] looked to be going in circles chasing a wish," Wilkerson writes early on. But for them, casting off into the unknown was better than trying to dodge Jim Crow's "invisible hand": "Across the South, someone was hanged or burned alive every four days from 1889 to 1929," Wilkerson reports. Among their crimes: "boastful remarks" or "trying to act like a white person."

In many ways these Southern migrants were motivated by the same reasons immigrants have long set their sights on this country. However, Wilkerson underscores the irony, "They did not cross the turnstiles of customs at Ellis Island, they were already citizens. But where they came from they were not treated as such." Told in a voice that echoes the magic cadences of Toni Morrison or the folk wisdom of Zora Neale Hurston's collected oral histories, Wilkerson's book pulls not just the expanse of the migration into focus but its overall impact on politics, literature, music, sports — in the nation and the world.

Anchored by three dynamic narratives of Southerners who fled the "bottomland" to make their way North or West in pursuit of the American dream, Wilkerson is able to chart the differences of the treks depending on decade, city of origin and ultimate destination.

This is deep water: 15 years of research, with 1,200 interviews pared down to three representative stories. Wilkerson, a Pulitzer-prize-winning, former national correspondent for the New York Times and a professor of journalism at Boston University, has rendered the Great Migration through a trio of voices —symbolic portraits as intricately etched as heirloom cameos:

Ida Mae Gladney, a former sharecropper — never any good at picking cotton — who quietly left Mississippi in 1937 with her husband, son, daughter and another on the way for Chicago; George Starling, who fled Florida for Harlem in 1945 after noisily agitating for citrus pickers' rights and crisscrossed the nation on a web of rails as a passenger-train attendant; and surgeon Robert Joseph Pershing Foster, who departed Monroe, La., in 1953 to pursue his medical career in a place he'd seen only in movies — Los Angeles, a locale he hoped would be free of strictures or roadblocks. All three, their migration separated by different decades, were bent toward the same thing that Foster was seeking as he barreled across the dark blacktop, due west, toward Los Angeles, shedding the baggage of his name, his former place, his past: a blank slate.

The Promised Land was imperfect. Many uprooted blacks found something they could only call "the mirage of equality." Instead of "Colored Only" signs, Foster quickly learned that out West there were silent codes and whispered restrictive covenants. Instead of being denied a highball at a Penn Station pub, the bartender might simply smash your glass when you were through, recalls Starling.

The '60s brought riots and assassinations, the succeeding decades urban blight and violence, and though those golden cities didn't offer all they hoped for, not one of the migrants regretted pulling up stakes and taking a chance on "what if?" — all the while carrying the South in their hearts. 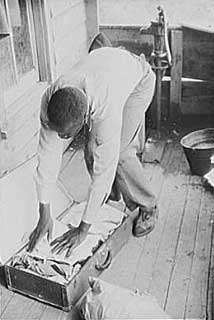 For many this book will flesh out an under-reported chapter of American history, which was Wilkerson's goal. However, for a certain generation of African Americans, this book will stir a sense of relief — that these stories and rituals that so many migrants attempted to hand-carry in the hopes that they might take root — have now been set down between two covers and in such dignified fashion.

Wilkerson has logged not just the dates and figures that make these stories fact and thus formal history, she's made indelible the fading music of these voices, the dance of their speech patterns, the intricate chemistry of folk cures and cornbread rendered from scratch. Beyond the family china or a great-grandmother's wedding ring, there was always the ambient fear that these stories were actually the most fragile pieces in the hope chest — the easiest to go missing. What she's done with these oral histories is stow memory in amber.  (source; Los Angeles Times copyright 2013 Los Angeles Times)