From the St. Louis Post-Dispatch, "A Look Back • Evicted sharecroppers live on roadsides in 1939," by Tim O'Neil, on 22 January 2012 -- SIKESTON, Mo. • Evicted from the cotton fields, the homeless sharecroppers set up ramshackle camps along two major highways. They slept in makeshift huts and jalopies, and huddled near fire barrels.

"We have no place to go," said William H. Jones, one of the banished. "We don't know if this will do any good, but it will show the people what we are up against."

Their camps began popping up on Jan. 9, 1939, along U.S. Highways 60 and 61 in southeast Missouri. Passing motorists spread the word. St. Louis newspapers soon ran regular front-page stories and photographs about the 1,500 men, women and children living on roadsides. First lady Eleanor Roosevelt mentioned the camps in her syndicated column.

John T. Clark, leader of the Urban League in St. Louis, urged city folk to help. "Our problems are not separate from those of Negroes in rural districts," Clark said.Most of the homeless sharecroppers were black. About 10 percent were white. Icy drizzle and snow fell upon them all. 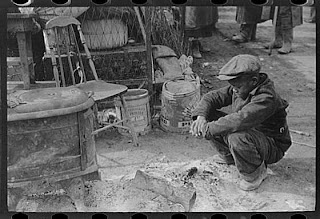 The exodus was an unintended consequence of changes in federal crop assistance. The government announced it would make partial payments directly to sharecroppers, who lived on other farmers' lands and worked for a share of what they raised. Some landowners decided to end the traditional system, keep the full federal payments and pay daily wages. On New Year's Day, they evicted sharecropping families from the shacks that dotted the wide, flat countryside.

Help was slow in coming. Promises of state-surplus food were thwarted by shipping delays. Labor and civil-rights organizations from St. Louis arrived with supplies, but that created another kind of conflict.
Fifty landowners met in Charleston, Mo., on Jan. 13 and adopted a resolution urging the government "to refrain from encouraging the movement." They accused 'scheming agitators" of stirring trouble. A New Madrid sheriff's deputy told four St. Louis union activists, "We don't have any use for people like you."

A few days later, the Missouri Highway Patrol forced squatters to move, directing some to a swampy patch of the Birds Point Floodway, which had been overwhelmed by the Mississippi River two years before. Sharecroppers named it "Homeless Junction."

The Rev. Owen Whitfield, a protest leader, spoke in St. Louis on Jan. 22 to 600 sympathizers at the Clothing Workers Hall, 1722 Washington Avenue. Whitfield described the "destitution among white and Negro workers brought about by the collapse of the sharecropper system." Hat-passing raised $100 for the cause.

Some sharecroppers became day laborers; others migrated to cities. The federal government built 10 rural villages for the exiles. One was called Cropperville, 10 miles southwest of Poplar Bluff. A stone monument marks the place.  (source:St. Louis Post-Dispatch )


FSA Photographers at AMoA: Rothstein Discusses Sharecropper Evictions in 1939 from Victoria Taylor-Gore on Vimeo.
Posted by Ron at 12:48 PM