Copper was the "red gold" of Africa and had been both mined there and traded across the Sahara by Italian and Arab merchants. The early Portuguese explorers of the 1470s observed that copper bracelets and leg-bands were the principal money all along the west African coast. They were usually worn by women to display their husband's wealth. The Portuguese crown contracted with manufacturers in Antwerp and elsewhere to produce crescent rings with flared ends of wearable size which came to be called "manilla," after the Latin manus (hand) or from monilia, plural of monile (necklace). 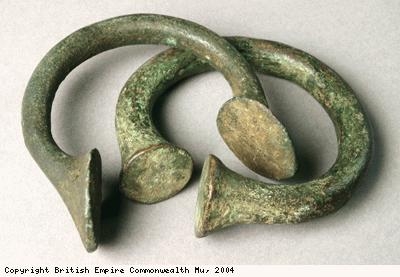 Records of a contract between the Portuguese government and Erasmus Schetz of Antwerp, who supplied the Portuguese factory at Mina with as many as 150,000 manillas per year, are widely quoted. The standard in 1529 was supposedly about 240m long, about 13m gauge, weighing 600 gram. However, no examples of torque-shaped bracelets in this weight range are known today, and a wreck dated to 1524 carried manillas of typical form but only slightly flared, averaging 306 grams.

Do these heavy Schetz manillas even exist today, and if so, what do they look like? Duchateau, Royal Art of Benin, shows a plaque with a European holding two pieces with barely flared ends whose apparent size could match these specifications, while p.15 ilustrates five pieces of conventional form, but without scale. Then, too, the Dutch participated in the trade. Did they get their manillas from nearby Antweerp as well, or did they use something different.

Objects used as currency were sometimes also in themselves desirable objects, frequently used for body ornamentation. In west Africa from the fourteenth century, copper bracelets were used as currency. After the arrival of Portuguese and other European traders, great numbers of these manillas (the Portuguese word for bracelet) were produced in Europe to trade in west Africa. This iron manilla was made in England, for trade with the Igbo people of Nigeria to obtain palm oil and ivory. The ship carrying this manilla from England to Africa was wrecked off the coast of Ireland in 1836. (http://www.prm.ox.ac.uk/LGweb/coins/1884_99_42.htm) Manilla typology is a largely unexplored subject. While trader and traveler accounts are both plentiful and specific as to names and relative values, no drawings or detailed descriptions have survived which could link these accounts to specific manilla types found today. Historians and economists emphasize patterns of trade and show no interest in the specific appearance or variations among trade goods. Collectors rely on a confusing and incomplete chart by Johansson, Nigerian Currencies, unsourced, but reproduced endlessly, including in scholarly works. When I asked Johansson in 2007 about his sources, he said he could not remember. The chart shows nine named pieces, and he cites other types by area of use, which are not shown. 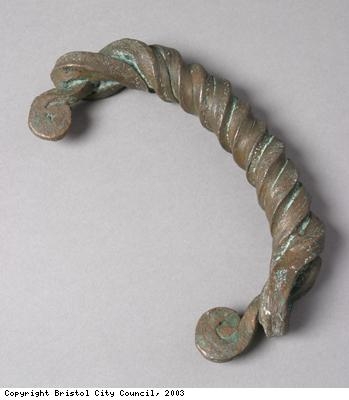 Twisted Manilla. Manillas, a type of currency in Africa.
Distinguishing factors are thickness and the diameter and degree of flare to the ends, size / weight, and shape. I believe that there really are few discreet types, mainly an evolutionary process: from large to small, heavy to light, crude to finished; end flare subtle to exaggerated, and footprint wide and rounded to small and elongated. The proliferation of African names is probably due more to regional customs than actual manufacturing practices. My own approach has been to examine and sort thousands of pieces obtained from different places over time, and try to apply the names in Johansson's chart, where possible, to varieties as found. 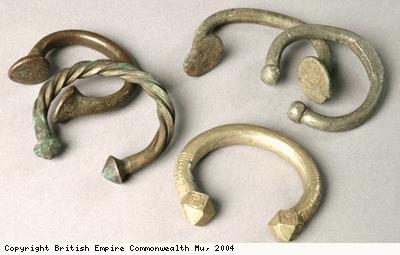 The bracelet is the most common money form in Africa. It served the important monetary functions of portability and wealth display.Variants of this form were accepted virtually everywhere in Africa, with the result that today it is often difficult to know where a particular type originated or was used, and to what extent it was either money or jewelry. My essay African Bracelet Money: Unanswered Questions surveys what we do know about bracelets and manillas. For purposes of this listing I have somewhat arbitrarily sorted out the Calabar rod pieces (perhaps earliest bracelet forms), the manillas (best documented as money), and legbands (differently worn) as separate categories. Detailed Offering of Bracelet Money is under construction. 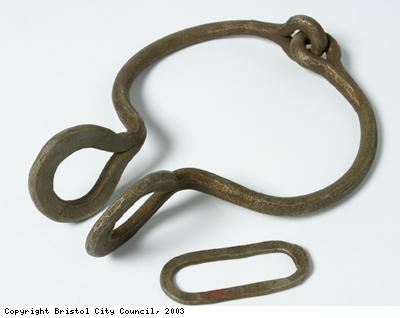