THE TOMB OF THE UNKNOWN SLAVE 
According to the St. Augustine Catholic Church of New Orleans  --  On this October 30, 2004, we, the Faith Community of St. Augustine Catholic Church, dedicate this shrine consisting of grave crosses, chains and shackles to the memory of the nameless, faceless, turfless Africans who met an untimely death in Faubourg Treme. The Tomb of the Unknown Slave is commemorated here in this garden plot of St. Augustine Church, the only parish in the United States whose free people of color bought two outer rows of pews exclusively for slaves to use for worship. This St. Augustine/Treme shrine honors all slaves buried throughout the United States and those slaves in particular who lie beneath the ground of Treme in unmarked, unknown graves.

There is no doubt that the campus of St. Augustine Church sits astride the blood, sweat, tears and some of the mortal remains of unknown slaves from Africa and local American Indian slaves who either met with fatal treachery, and were therefore buried quickly and secretly, or were buried hastily and at random because of yellow fever and other plagues. Even now, some Treme locals have childhood memories of salvage/restoration workers unearthing various human bones, sometimes in concentrated areas such as wells. In other words, The Tomb of the Unknown Slave is a constant reminder that we are walking on holy ground. Thus, we cannot consecrate this tomb, because it is already consecrated by many slaves' inglorious deaths bereft of any acknowledgement, dignity or respect, but ultimately glorious by their blood, sweat, tears, faith, prayers and deep worship of our Creator. GENESIS OF THE TOMB OF THE UNKNOWN SLAVE


Back in 1992, William Savoy, lay rector of St. Luke Episcopal Church in New York, wrote Father Jerome LeDoux, S.V.D. a letter suggesting that we institute a “Tomb of the Unknown Slave” somewhere on the property of St. Augustine Catholic Church in New Orleans. This tomb would commemorate the remains of slaves buried throughout the nation in unmarked graves. Bill, as he prefers to be called, has an abiding interest in St. Augustine Church because his grandfather was baptized here.

Since Bill left all the details up to us, the idea formed slowly, gradually morphing from having some actual slave bones, dust or ashes housed in small cylinders and set into the marble of the St. Joseph altar, to an altar-like shrine outside the church with or without bones, to a simple garden plot with a number of crosses, chains and shackles. In September of 2004, Anna Ross Twitchell, an avid student of slavery and slave plantations, suggested that an altar-like shrine would be pretentious, considering that the slaves had little or nothing. Plain crosses stuck in the ground in a given area around an explanatory plaque on the church wall would more than suffice to depict the stark fact that numerous unknown slaves are buried at random here and in many locales around the nation.

Happening upon the scene, John Peter “Jay” Matranga listened with interest as Father LeDoux recounted his conversation with Anna Ross Twitchell. Jay ran up to his room in the church hall and returned with a proposed diagram of a shrine to the Tomb of the Unknown Slave. Both he and the pastor were astounded to see how the two of them had independently arrived at virtually the same design with chains, shackles and crosses. From that point on, the project took wings. 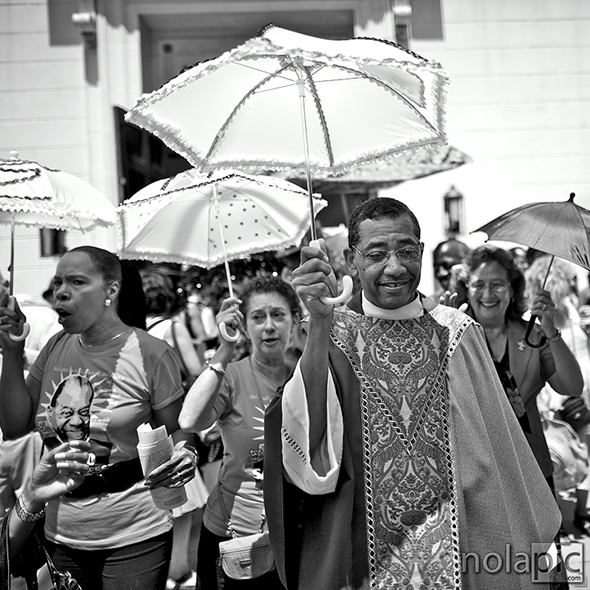 Ophey Joseph Thibodeaux, Jr., a friend of Jay’s, began to scour the West Bank of the Mississippi River and old sugar mills around Donaldsonville and thereabouts to find old chains. He eventually came upon a huge marine chain – free for the taking - which had been used to hold a buoy in the Mississippi River, another place, incidentally, where numerous slave bodies were dumped. Half in jest, he showed the chain to Jay who, to his surprise, said: “That’s exactly what we’re looking for!”

The outsize chain was then sandblasted to remove excess rust. Another friend, David “Thib” Thibodaux, who has a welding facility in Sorrento, Louisiana, took the chain, cut it into two pieces to form a cross, then suspended the longer piece from a hook in his large, hangar-like workplace. This enabled him to put a double weld wherever the links touch one another, thus rendering the chain rigid and strong. His right hand man, Michael “Cuttinhead” Simoneaux, did most of the welding.

Each link weighed 45 pounds, giving the cross a total weight of 1500 pounds. Now rigid, the cross was set in a fallen position with one big steel foot welded to the bottom of the cross and another big steel foot welded to an arm of the cross bent down to ground level. Awkward though it was, Thib managed to transport it here on a flatbed truck, unload it with a tractor with an arm designed to lift and transport, and place it squarely atop a reinforced concrete foundation which had been laid a week before. Then another yard of concrete was poured over both steel feet of the cross until it became completely rigid, strong and stable.

Thib Thibodaux donated his labor and expenses on the Tomb in thanks to God for a favor rendered. A welder and contractor by trade rather than an artist, Thib nonetheless fashioned a memorial which we consider a true work of art. Therefore, who is the creator of the Tomb of the Unknown Slave, since the idea came from Bill Savoy through Father LeDoux to Anna Ross Twitchell to Jay Matranga to Thib Thibodaux? With the Providence of God obviously at play every step of the way, we would have to declare Serendipity to be the creator of the Tomb of the unknown Slave. How could it just so happen that a handful of the right people were all in the right place at the right time? It is clear that God left no room for anyone to have bragging rights. So, to God be the glory! Smaller metal crosses around the Tomb were fashioned by friends of Jay’s, including the welded chain crosses done by Charlie Brown. Dwayne Cooley made the wooden crosses and fence of Spanish cedar.

Stark, gaunt, rusty and forbidding, the hulking marine chain cross effects a simultaneous, double depiction of the fallen Christ along the Via Dolorosa as well as of the slaves who fell so often during their hellish daily ordeals. Many visitors are finding it to be a transfixing medium of painful historical perspective and of raw, poignant meditation. Two wrought iron or steel benches will be placed on the sidewalk in front of the shrine for those who desire to sit a while and meditate.   (source: St. Augustine Catholic Church of New Orleans)