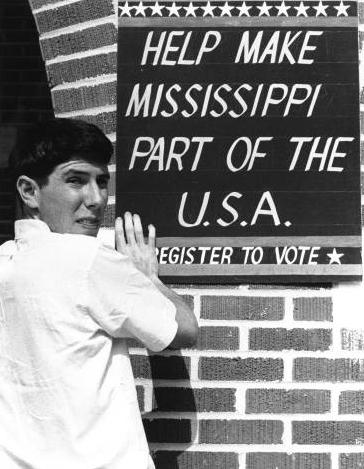 As reviewed in the New York Times, "A Few Hot Months of Solidarity and Violence: ‘Freedom Summer’ on PBS Looks Back at 1964," by Mike Hale, on 23 June 2014  -- The PBS documentary “Freedom Summer” won’t make many lists of the top television programs of the year, but it’s hard to imagine two hours better spent in front of a screen.

It continues the filmmaker Stanley Nelson’s commemoration of crucial moments in the civil rights movement under the auspices of “American Experience,” which gives it its premiere Tuesday [June 2014]. Following his “Freedom Riders” in 2011, Mr. Nelson celebrates the 50th anniversary of what was known as the Mississippi Summer Project, another instance in which blacks and whites came together to battle racism.

Mr. Nelson works in the talking-heads-and-archival-film style of Ken Burns, but he uses the similar techniques to make films that are more alive, more propulsive, combining Mr. Burns’s Olympian authority with an insistent rhythm and a clear current of emotion. Staying within standard feature-film time limits, he tells big stories with coherent, seamless elegance. Such is the case with “Freedom Summer,” a compressed, complex history of the campaign for voter registration and education in Mississippi led by the Student Nonviolent Coordinating Committee. The film lays out the unbelievable realities of black life in the state and the slow progress of SNCC toward the decision to bus in around 1,000 volunteers, many of them white college students, to generate attention and force a change.

It’s an awe-inspiring story, but Mr. Nelson keeps his focus close up on the details of organization and crisis management, and he is resolutely cleareyed, dispelling any notions about romantic young firebrands boarding buses for adventure. Organizers speak of the care with which the student volunteers were chosen, and the many who were rejected; for the safety of everyone involved, the project needed people “as together as it was possible to be at 19.” But there is romance and tremendous poignancy in the story, and Mr. Nelson evokes it quietly. Unlabeled cuts juxtapose black-and-white images of the young activists and residents and scenes of them now, talking about the greatest moment in their lives. Rita Schwerner, the widow of one of the three men murdered in the summer’s most notorious incident of violence, speaks calmly about her husband’s death.

And the film quotes from a letter that Andrew Goodman, another of the victims, wrote to his parents, reassuring them upon his arrival in Mississippi, not far from where he would die: “I have arrived safely in Meridian, Miss. This is a wonderful town, and the weather is fine.”  (source: The New York Times)