From its beginning -- ever since the nation's capital had been moved from Philadelphia in 1800 -- slavery was legal in Washington, D.C. With its proximity to both the upper and lower South, it would become a major center for the domestic slave trade, passing thousands of slaves through to the plantations of the deep South. Although Congress had the power to outlaw slavery in the District of Columbia, it did not do so until 1862 -- the power of the proslavery forces was too strong. Slavery proponents knew that if they kept the institution visible in the nation's capital, it would act as a vivid symbol of their grasp on the nation. They were right: the presence of slavery was impossible to ignore. Visitors expressed disgust at the sight of slave coffles and holding pens in the capital of the "freest" nation in the world. [http://www.pbs.org/wgbh/aia/part4/4h3139t.html] 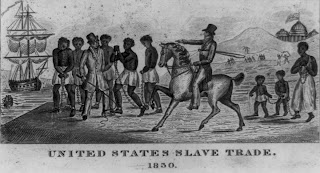 In the attached excerpt, traveler E. S. Abdy describes a slave pen in Washington. This selection is taken from his book Journal of a Residence and Tour in the United States of North America, From April, 1833, to October, 1834. Abdy was a fellow of Jesus College, at Cambridge University in England

One day I went to see the "slaves' pen"--a wretched hovel, "right against" the Capitol, from which it is distant about half a mile, with no house intervening. The outside alone is accessible to the eye of a visitor; what passes within being reserved for the exclusive observation of its owner, (a man of the name of Robey,) and his unfortunate victims. It is surrounded by a wooden paling fourteen or fifteen feet in height, with the posts outside to prevent escape and separated from the building by a space too narrow to admit of a free circulation of air. At a small window above, which was unglazed and exposed alike to the heat of summer and the cold of winter, so trying to the constitution, two or three sable faces appeared, looking out wistfully to while away the time and catch a refreshing breeze; the weather being extremely hot. In this wretched hovel, all colors, except white--the only guilty one--both sexes, and all ages, are confined, exposed indiscriminately to all the contamination which may be expected in such society and under such seclusion. The inmates of the gaol, of this class I mean, are even worse treated; some of them, if my informants are to be believed, having been actually frozen to death, during the inclement winters which often prevail in the country. While I was in the city, Robey had got possession of a woman, whose term of slavery was limited to six years. It was expected that she would be sold before the expiration of that period, and sent away to a distance, where the assertion of her claim would subject her to ill-usage. Cases of this kind are very common.