From NPR, "Hidden Museum Treasures: Fortune's Bones: 18th-Century Slave Gets New Life, New Recognition," on September 16, 2003 --  A small museum in Waterbury, Conn., is struggling with a big question: what to do with a set of human remains in its collection. In the next installment of All Things Considered's "Hidden Treasures" series, Harriet Baskas reports on a real skeleton in the closet.

Many people who grew up in Waterbury before 1970 remember school trips to the Mattatuck Museum to see the 10,000-piece button display, Charles Goodyear's rubber desk and colonial era tools and clothing. But for most people, one memory stands out: Larry. 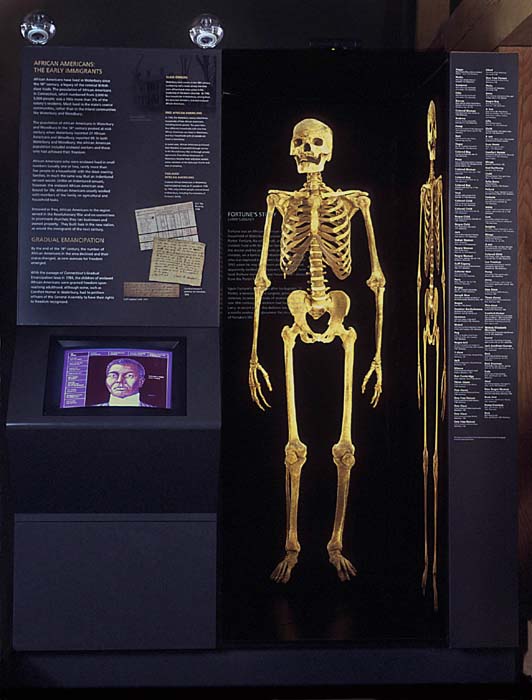 "Larry was the thing to see when you go to the museum," says resident Lillian Brown. "I don't think anybody ever envisioned that this truly was a human being. It was just a skeleton and all the ghost stories that people would tell."

Some kids had nightmares about Larry, says Baskas. Others claimed he was their grandfather, or George Washington or some other Revolutionary War hero. Bill Bergin knew better. His great grandfather, in 1910, found the skeleton in a boarded-up closet when he was renovating a Waterbury building. According to newspaper clippings, the skeleton was the remains of a man enslaved to one Dr. Porter in the late 1700s. After the slave drowned, Porter boiled and stripped the body to make an anatomy display. The name of each bone was written right on the skeleton and "Larry" was inscribed on the forehead. Porter's descendants had locked Larry in the closet. When he was rediscovered, he was donated to the Mattatuck Museum.

"He was displayed the way you'd see a skeleton in a doctor's office," says Marie Galbraith, the museum's executive director. Larry hung in a glass case until 1970 when museum officials finally acknowledged that he was more than a collection of bones.

"He was a father, he was a husband, He was someone's son," Galbraith says.

Larry was boxed up and stored in the museum basement until 1999. Then, Waterbury's African-American History Project Committee learned about Larry. They started an investigation, and found out that no one named "Larry" had ever lived in Dr. Porter's house, but a slave named "Fortune" did. Local records reveal that he died sometime before 1803 and that he had a wife, Dinah, and four children. Archaeologists and anthropologists then examined the bones to get a better idea of how Fortune lived. 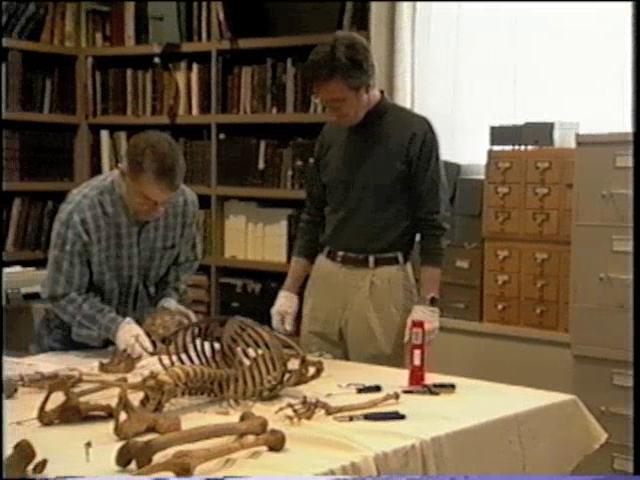 The Mattatuck Museum now has an exhibit dedicated to Fortune, including a poem, called The Manumission Requiem, by Connecticut Poet Laureate Marilyn Nelson. Fortune's bones, however, are not on display. They're still being studied, and, out of respect, stored away.

"I think of the Indians and their situation when their ancestors' bones were taken for display at museums," says Al Walton of the African-American History Project Committee. "They came of the mind that enough, we're going to take our ancestors, our old ones, give them a ceremony and lay them to rest. I think it's time for us to do the same, as African Americans, for Fortune."  (source: NPR)


Who Was Fortune (Fortune's Bones Opening Event, September 19, 2011) from Clarice Smith Center on Vimeo.
Posted by Ron at 1:20 PM