As reported by the Hartford Courant, "18th-Century Slave Named Fortune Finally Laid To Rest Body Of 18th Century Slave, Once Exhibited In Museum And Used To Teach Anatomy, Lies In State At Capitol, Then Is Buried In Waterbury," by Susan Dunne and Daniela Altimari, on 12 September 2013  --  |WATERBURY — The 18th-century slave called Fortune was laid to rest on Thursday, 215 years after he died, at a memorial service in Waterbury attended by hundreds of mourners, more than a dozen clergy and a gospel choir.
Fortune, who was enslaved by a Waterbury doctor, was never buried after his 1798 death because his owner wanted to use Fortune's bones to teach anatomy. In the 20th century, Fortune's skeleton was used as an exhibit at the Mattatuck Museum in Waterbury.

A project started in 1996 to discover the history of the museum's skeleton culminated in Thursday's burial, which was as dignified as demanded by the occasion, both a man's funeral and a touchstone in the history of the city's African American community.
Fortune's bones lay in state for five hours at the state Capitol in Hartford on Thursday morning, then were taken to St. John's Episcopal Church on the Green, the Waterbury parish in which Fortune was baptized in 1797.
His remains arrived in a silver hearse escorted by state police cars. The procession was greeted on the steps of St. John's by a bagpiper playing "Amazing Grace" and "The Water is Wide."
Eight pallbearers carried the simple, dark wood casket into the church, where it was draped in satin and carried into the high-ceilinged, elegantly arched sanctuary. A racially mixed group of more than 300 people gathered to celebrate the legacy of a man who, in life and death, was treated like a possession: something to be owned, dismembered, studied, exhibited and later boxed up in a museum archive.
Amy Welin, rector of St. John's, led the service. Biblical readings chosen for the occasion evoked the specter of slavery:
"For those who led us away captive asked us for a song, and our oppressors called for mirth."
"There is no longer Jew or Greek, there is no longer slave or free, there is no longer male and female, for all of you are one in Christ Jesus."

"I do not call you servants any longer, because the servant does not know what the master is doing."
After the readings, Welin said from the pulpit, "It is with restored dignity his bones will be buried. … We bury Mr. Fortune not as a slave but as a child of God who is blessed. … We must refuse to give in to the forces that seek to diminish us."
The fate of Fortune's family — his wife, Dinah, and his children, Africa, Jacob, Roxa and Mira — is not known, but Welin said members of the Union of Black Episcopalians and the African American History Project Committee, the group that researched Fortune's background, "stand in as his family."
"By our common humanity, we're his descendants," said Welin, who is white. "The whole theory of racial difference is a social construct … based on untruth."

Her comments were followed by statements from several members of the local clergy. The Rev. Calbert Brantley of Zion Baptist Church declared that "human beings, regardless of color, race, gender, sexual orientation or ethnicity, are all God's children created in God's image."
Two clergy quoted Ezekiel 37, in which God asked Ezekiel, "Can these bones live?"
Winifred Ward of Grace Baptist Church responded to that question: "I believe Mr. Fortune's bones can live if we allow ourselves to keep telling the story."
The Rev. Leroy O. Perry, of Mount Olive A.M.E. Zion Church, added, "We are here because God has connected these bones together and said 'they live.'"
Perry also joked that he planned to attend the burial "to make sure they buried the bones."
Many of the congregants attended the burial as well. During the drive to Riverside Cemetery, a downpour started. The burial came amid a cluster of umbrellas, with the driving rain and light thunder almost drowning out Welin's voice. 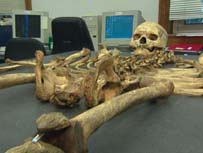 Earlier on Thursday, at the state Capitol, Fortune got an honor usually reserved for ex-governors and other prominent officials.
Steven R. Mullins, president of the Southern Union of Black Episcopalians, said, "Mr. Fortune served as a slave all the years of his earthly life. What happened to Mr. Fortune should not happen to any human being in the world. ... This is our opportunity today ... to make up for that.''
Mullins said Fortune's plight serves as a reminder that slavery existed in the North as well. He called the service a "teachable moment." Like the other speakers, Mullins used the title "Mr." as a way of conveying respect.

The service began when a casket draped in purple cloth and carrying Fortune's bones was wheeled into the Capitol, where a small crowd of religious leaders, history buffs, officials and television crews had gathered beneath the ornate brass chandeliers. After prayers and remarks, it concluded with a powerful rendition of "The Battle Hymn of the Republic," performed by Mullins' 9-year-old daughter, Nora.
Lt. Gov. Nancy Wyman noted that Fortune's life was extremely challenging. "Even after death, he did not get the respect he should have as a man ... as a human being," she said. "This state is welcoming him now. ... Mr. Fortune, you are somebody [who] will not be forgotten."
Mullins savored the irony that Fortune's remains are buried at Riverside Cemetery, in the same section where many members of Waterbury's 18th century aristocracy are buried. "Talk about contrasts," he said. "He is now good enough to rest in the same dirt as they're in."  (source: The Hartford Courant)