London Coffee House, operated by the Bradfords at Front &Market Sts., served as the early focus of Philadelphia's political and commercial life. One brother operated the coffee house; the other had a print shop in the adjoining building (at left) where the "Proceedings of the First Continental Congress" were printed. At right, along Market St., is the slave market.

From the Philly Magazine, "American Slavery Was Born 393 Years Ago Today: How and where human beings were bought, sold and owned in Center City Philadelphia," by Michael Coard, on 20 August 2012 -- As you take your lunch break today in Center City, stroll over to Front and Market where the historic London Coffee House once stood, and celebrate the institution that made America one of the wealthiest and most powerful countries in the world, the institution born exactly 393 years ago on August 20, 1619: the institution of slavery. In fact, it was at that site in downtown Philly, where black men, women and children were bought and sold like cattle and like tools.

On that fateful date nearly four centuries ago, as noted by English settler John Rolfe, a wealthy tobacco planter and the so-called husband of Pocahontas, “ … there came a Dutch man of warre that sold us twenty and odd Negars” in the Virginia Colony at Old Point Comfort (now Fort Comfort in Hampton). They were the first enslaved blacks in a land that would become the United States of America.

Following Portuguese raids in southern Africa that began in 1617, Luis Mendes de Vasconcellos invaded the village of Ndongo in Luanda, Angola in 1619 and loaded 60 captives aboard the slave ship Sao Joao Bautista and ordered it sent to Vera Cruz, Mexico. The ships White Lion—with Captain John Jope (also known as “The Flying Dutchman”) at the helm along with his assistant, English pilot Marmaduke Rayner—and the Treasurer joined forces when they came across the Sao Joao Bautista in the waters of the West Indies, attacked it, and robbed it of its entire cargo, including the Africans—placing them on the White Lion, which arrived at Old Point Comfort on August 20, 1619 with 20 of the 60. When the Treasurer arrived about four days later and attempted to trade the 40 African captives aboard for supplies, they were rebuffed. So they took their condemned human cargo not to the sunny beaches of Bermuda but to its hellish plantations, never to be heard from again. The price for these humans? Corn!

Among the 20 captured Angolans left at Old Point Comfort, two, namely Antonio and Isabella (whose Spanish Christian names were forced upon them like we name our pets today), were traded to Captain William Tucker for “badly needed provisions.” By the way, four years later, Antonio and Isabella became the parents of the first black child whose birth was officially documented in Colonial America. And the name imposed upon him was William Tucker—also the name of the man who enslaved his parents. A third identified person, who was given the name Pedro, and the remaining 17 were traded for additional products to Governor George Yeardley and Abraham Piersey, who forced them to labor at plantations along the nearby James River in what would become Charles City.

But such trading and selling and forced labor were not unique to Charles City or James River plantations or Old Point Comfort or Virginia or even the South. It happened right here in Philadelphia, in downtown Philly to be exact. On the southwest corner of Front and High—now Market—streets, stood the London Coffee House, which opened in 1754 with funds provided by more than 200 Philadelphia merchants. It was where merchants, shippers, businessmen and local officials, including the governor, socialized, drank coffee and alcohol, and ate in private booths while making deals. It was where, on the High Street side, auctions were held for carriages, foodstuffs, and horses—and, by the way, human beings, specifically African humans beings who had just been unloaded from ships that docked right across the street on the Delaware River.

In 1991, a historical marker was installed on the corner of Front and Market, and it reads: “Scene of political and commercial activity in the colonial period, the London Coffee House … served as a place to inspect Black slaves recently arrived from Africa and to bid for their purchase at public auctions.” It really says that. And it really happened there. Actually here. In Center City. 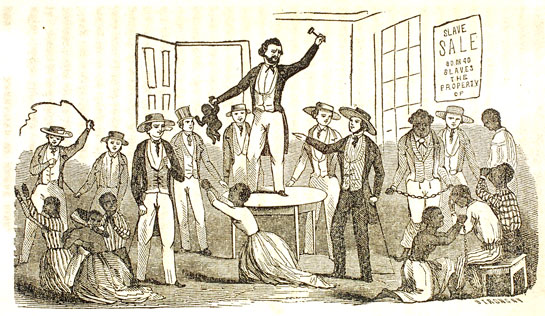 And it happened like this. The captured black men, women and children, usually about five or six at a time, were placed on a thick wooden board, approximately three feet wide and eight feet long, set atop two heavy barrels on each end. These whipped and shackled human beings were paraded onto the boards, forced on display to slowly turn around and bend over, inspected by having their mouths forced open, their genitals grabbed, and their limb muscles flexed, and then they were auctioned off to the highest bidder. Immediately afterward, they were sold off, mother taken from daughter, father from son, brother from sister, husband from wife. Following these forced separations, they were scattered across the country. And they would never touch or even see one another again.


I feel compelled to note that despite my valiant attempt to write this as a professional journalist should, I’m actually crying right now. Tears of pain and rage are literally streaming down my face and are forcing me to stop for a moment and think about the brutal heartlessness of these wicked auctions and these evil separations. Stop what you’re doing for a few seconds and imagine that happening today to you, to your children, to your parents, and to your siblings. Go ahead and try.

This heart-wrenching inhumanity was such an outrage to Founding Father Thomas Paine, who spent time as a boarder across the street from the London Coffee House, that among his first editorials were essays harshly condemning the slave trade.

Slavery was an essential component of day-to-day life in Pennsylvania generally and Philadelphia specifically. In the 1760s, nearly 4,500 enslaved blacks labored in the colony. About one of every six white households in the city held at least one black person in bondage. This cruel institution began in this colony in 1684 when the slave ship Isabella, from Bristol, England, anchored in Philadelphia with 150 captured Africans. A year later, William Penn himself had three black human beings in bondage at his Pennsbury manor, approximately 20 miles north of Philadelphia. Even George Washington, the great patriot, the great general, and the great president enslaved blacks, 316 to be exact. And he illegally—yes, illegally—held nine of them right here in the City of Brotherly Love at America’s first “White House,” which was officially known as the President’s House at Sixth and Market (then High) streets. In fact, it was at that very location where, in 1793, he signed the notorious Fugitive Slave Act, a law that threw escaped black men, women and children back into bondage.

You might say that all of this slavery stuff happened a long time ago, that it ended 147 years ago in 1865, and that I should therefore “get over it.” But slavery and its direct effect didn’t really end then. After passage of the 13th Amendment, there was sharecropping, then convict leasing, then de jure Jim Crow laws, then de facto Jim Crow practices. In fact, it wasn’t until the passage of the Civil Rights Act of 1964—a mere 48 years ago—that equal rights started to become at least somewhat of a practical reality. And if you don’t agree, then answer this: If you, your parents, your grandparents, your great-grandparents, and so on could have the experience in America that blacks had or that whites had, which would you choose? I know what the 20 human beings in Old Point Comfort 393 years ago from this very day would have chosen.  (source: Philly Magazine)