From the New York Times, "Beyond the Luster of Mahogany," by Eve M. Kahn, on 23 August 2012 -- Mahogany for 18th-century furniture was harvested under appalling conditions across the Caribbean. Slaves branded with owners’ monograms lived in thatched huts and scouted for trees. They had to drag and roll felled mahogany trunks to riverfronts and then float the logs, which were chained together, to ships waiting in bays full of sharks and coral reefs.

“Felling Mahogany in Honduras” depicts cutting the trees to make furniture for the wealthy, as slaves did across the Caribbean in the 18th century.

There were only a few upsides to the task. “Enslaved woodcutters had the option of wielding their machetes against a despised authority or just slipping away into the surrounding forest,” the historian Jennifer L. Anderson writes in a new book, “Mahogany: The Costs of Luxury in Early America” (Harvard University Press).

In a recent interview Ms. Anderson emphasized that she did not want readers to begin recoiling in horror from mahogany antiques, despite the material’s origins in cruelty. Her goal, she said, was to reveal the human dramas and real estate battles behind the objects. 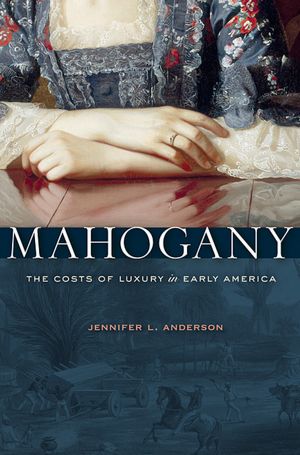 She researched the subject at former mahogany plantations, piecing together how whites and blacks had coexisted and sometimes formed blended families. The Rhode Island-born merchant Jonathan Card ended up on an island in Belize, secretly married to Dorothy Taylor, his former housekeeper, who was black. His brother James joined him in the mahogany trade, supplying carpenters in Newport, R.I., whose work sells for millions of dollars today.

George Washington decided to grow his own grove of this desirable crop, and had 48 seeds planted at Mount Vernon. When the saplings shriveled away, Ms. Anderson writes, “Washington did a lot of hand-wringing and blamed his horticultural losses on his slaves’ failure to water enough.”

Mahogany also became a popular target for looters and rioters. Caribbean slaves stole mahogany chests and chairs when they escaped from plantations. In 1830s Philadelphia, fine woodwork and furniture became status symbols for free African-Americans. Writing about white mobs attacking their homes, a newspaper reporter described a sorry pile of “bedsteads and mahogany banisters, cut up into small particles, as for kindling wood.”

White abolitionists gradually lost their taste for mahogany. Dickens wrote that the varnished wood reflected “in the depth of its grain, through all its polish, the hue of the wretched slaves.”

Ms. Anderson says she still finds herself aesthetically drawn to mahogany. She can remember longing to touch a museum piece that “looked like the pelt of a wild lion, golden and shimmering,” she said. She owns a mahogany tea table, probably made from trees felled in Belize.

She visits a favorite tree at the New York Botanical Garden. “A very skinny little mahogany grows in a greenhouse there,” she said.(New York Times)
Posted by Ron at 3:18 AM