From the Star, "Untold story of U.S. slave rebellion retold centuries later, by Mitch Potter, on 23 January 2011 -- DESTREHAN PLANTATION, LA.—A long-lost chapter in American history is being written anew today, as southerners begin to come to terms with the previously untold story of the continent’s largest slave revolt.

And while historians today debate the details, a consensus is forming around just how close New Orleans came to becoming a free black colony precisely 200 years ago when a makeshift army of some 500 slaves, some just a few years out of Africa, rose up in carefully calculated unison with epic consequences.

Here at the pastoral Destrehan Plantation, the aftermath of the January 1811, insurrection was especially brutal — newly unearthed colonial records show the estate was the epicentre for a judicial reckoning, with the white slaveholders ordering as many as 100 ringleaders shot or hanged.

They black rebel leaders then were decapitated, with their heads mounted on stakes in a horrific necklace of retribution stretching 70 kms down the Mississippi, all the way to the gates of what was then America’s most crucial frontier city.“It is one of the most striking moments of amnesia in our national history. What you had in the end were plantation owners sitting down to sumptuous five-course meals as they looked out the window at their own beheaded slaves,” said historian Daniel Rasmussen, who began his investigation as an undergraduate student at Harvard.

“The planters were outnumbered and terrified. They thought of their slaves as sub-human they saw ritual beheading as a prime way to get their message across.

“And what followed this gruesome display was a concerted attempt to write it out of the history books. The southern newspapers suppressed the story, either refusing to publish or delaying for months. Only a few papers much further north published small paragraphs condemning the savagery of the planters.”

Tulane University, the African American Museum in Treme and Destrehan Plantation all are filling in the blanks with the launch of a yearlong look at the 1811 uprising.

But it is Rasmussen’s riveting new book, American Uprising: The Untold Story of America’s Largest Slave Revolt, that is turning the most heads, in academia and beyond. Collating clues from dust-encrusted plantation ledgers, colonial court records, obscure snippets of antebellum correspondence and the oral memory of slave descendents, Rasmussen’s study recreates the intense planning and careful timing that underpinned the audacious bid for freedom involving slaves from a dozen plantations along the river.

Two Asante warriors, Kook and Quamana, likely battle-hardened from wars in Africa, conspired with Charles Deslondes, a mulatto slave-driver of mixed parentage, who Rasmussen describes as “the ultimate sleeper cell.” All had, in one way or another, been “sold down the river” — a cliché that first conceived to describe the especially horrific nature of slavery at southernmost end of the Mississippi, where extreme violence underpinned the extreme wealth of the lucrative French sugar plantations.

Spiked collars were the norm for the uncooperative — the spikes pointing inward to prevent sleep. Deslondes, working on behalf of his plantation owner, was responsible for administering punishment, including the lash for those who would dare refuse the backbreaking labours of harvesting, beating, boiling and refining the sugar cane.

Haiti was also a factor. The slave revolution of 1791 was, in its own way, a shot heard round the slave world, as French colonial refugees and their slaves washed into New Orleans. It remains unclear whether Deslondes came from Haiti.

Louisiana was vital American territory 200 years ago, but just barely — Napoleon had sold France’s claim to the vast Mississippi watershed to the United States a few years earlier for a paltry $15 million, a gift that would ultimately open the drive to the Pacific. But Louisiana’s French colonial class had nothing but contempt for its new American overseers, who were in January 1811, preoccupied in battles with the Spanish to secure a tract of west Florida. New Orleans was nearly defenceless.

“The attack came at just the right moment — the Americans were fighting the Spanish and with the harvest completed, the French planters were focused on the month-long series of lavish carnival balls and all-night parties leading up to Mardi Gras. And several days of steady rains had turned the road to mud, impeding any counterattack. Their guard was down,” Rasmussen said in an interview with the Toronto Star.

“Scarcely a resident in New Orleans had a musket. The city had a weak detachment of 68 troops.”

The rebels rose first at André Plantation after sunset on Jan. 8, 1811. And within hours, they were on the march to New Orleans. A ragtag army, perhaps, but one that marched in uniform, having seized militia clothing and weapons from plantation armories. Their numbers grew as the march advanced and as rumor of the uprising swept down the river road, the ruling class fled for the safety of the city.

“The planters couldn’t understand it — the idea that the slaves were not just savages, but that this was something planned. You had an army marching in military formation, wearing military uniforms, carrying flags and banners and chanting, “Freedom or death,” said Rasmussen.

New Orleans was on the edge of chaos — not least because its own population was 75 per cent black, awakening the fears of a second front rising up within the town itself. The city would order its taverns closed, imposed a curfew on all black males and summoned able-bodied whites to arms. Simultaneously, fleeing French planters regrouped on the West Bank of the Miscopy upstream from the city.

The two forces, American regulars and French planter militia, ultimately were able to confront the freedom fighters from both sides in a series of pitched battles beyond the city gates in the days that followed. Surviving slaves fled to the swamps and manhunts ensued, with dozens rounded up for the rough justice to come.

In the end, 21 slaves were interviewed by their colonial overseers in a bid to piece together the roots of the conspiracy and assign criminal blame. Elements of the story, says Rasmussen, survive in the oral histories of slave descendants, passed down and told “even to the present day at family reunions.” But the main snippets are to be found, refracted through the writings of the white ruling class, which show extent of fears never before told.

“They were sitting on a powder keg and when it exploded and was put down, everything changed. Instead of a mini-Haiti, Louisiana society became militarized. The revolt pushed this old aristocratic society into the hands of the American government,” said Rasmussen.

“What you see is that the foundations of American power in this part of the deep South were built upon the commitment to restore and uphold slavery. Essentially, the French planters decided to cling to the United States as an ark of safety.” 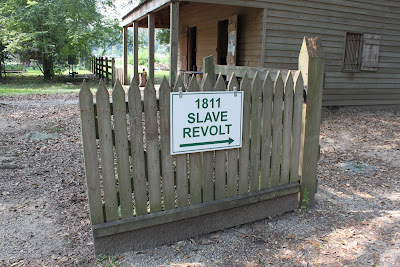 As for Kook, Quamana, and Charles Deslondes, only now are historians weighing how to elevate them alongside the likes of far better known revolutionaries like Nat Turner and John Brown as major figures in the American struggle for emancipation.

“None of this has ever been taught in American schools and the hope now is that these men who were executed for the strongest ideals will take their rightful place in history,” said Rasmussen.

“They were political revolutionaries, they deserve a place in the national memory and there is a sense now that they are getting it. We need to wrestle with this history if we are ever to truly understand it.”  (source: The Star)