In 1948, Ms. Wynn would open her own boutique in Manhattan in what is now Washington Heights on Broadway and West 158th Street. She would later move ‘Chez Zelda’ midtown to 57th street and her sister, Mary Barbour, assisted her and supervised the staff of the store that attracted celebrities and stylish women from all walks of life. 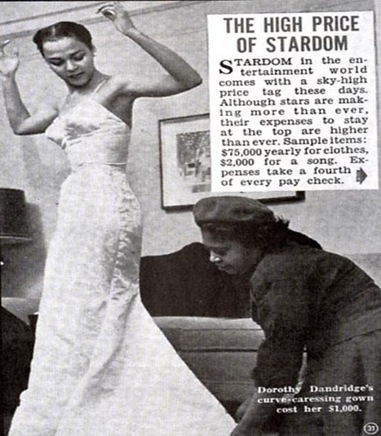 In 1949, the Pennsylvania-born designer who would later be known simply as Zelda Wynn, was president of the New York chapter of NAFAD, the National Association of Fashion and Accessory Designers, an organization of Black designers that was founded by none other than educator Mary McLeod Bethune. In the early 1950s, singer Joyce Bryant, was a huge star in the Black community who also had enough mainstream success to do a photo spread in LIFE magazine and be dubbed “the Black Marilyn Monroe” with constant mentions in Walter Winchell’s gossip column. Despite her undeniable soprano and four octave range, she was best known for her sexy image, which was jumpstarted by Ms. Wynn. In 1953, Our World, a premiere magazine for African-Americans at the time, noted that “Zelda’s gowns changed torch singer, Joyce Bryant’s career. When Zelda met Joyce, she was wearing bouffant, ‘sweet’ dresses and was singing ‘sweet’ songs which, as the designer noted she preferred because she was religious. However, Ms. Wynn convinced the singer that she was hiding her curves wasn’t doing her any favors. Once Ms. Bryant adapted the skin-tight, low-cut gowns by Zelda Wynn Valdes, her career took off.

In 1970, Arthur Mitchell asked Ms. Wynn to design costumes for his year-old dance company, and she stayed for thirty years and became the company’s matriarch until her death in 2001 at the age of 96.

"I just had a God-given talent for making people beautiful," she said in a 1994 interview and, she was being modest. Consider the story that she always told about Ella Fitzgerald: "Edna Robinson (Sugar Ray Robinson’s wife) recommended me to Ms. Fitzgerald when she was going to sing at the Apollo Theater in New York,” said Ms. Wynn. “I was able to measure her once, but thereafter she was so busy that she didn't have the time. She would order - always in a rush - and I would study photos of her and guess her increasing size. She always said they fit and she'd order more, always three at a time. I never had more than three to four days to finish the gowns. I am pleased to say that I never missed a delivery.”  [source: Ebony Magazine: Nichelle Gainer is a beauty, fashion and lifestyle writer whose work has appeared in magazines and websites including GQ, InStyle, Glamour, Newsweek.com and Essence.com.]