From the New York Times Sunday Book Review, "Point of Return: ‘Home,’ a Novel by Toni Morrison," by Leah Hager Cohen, on 17 May 2012 -- The first four words of Toni Morrison’s new book greet — or assail — us before the story even begins. They’re from the epigraph, which quotes a song cycle written by the author some 20 years ago and therefore, it seems safe to say, not originally intended for this book, but an indication, perhaps, of how long its themes have been haunting her. And “haunting” is a fitting word for the lyric itself, in which a speaker professes to lack both recognition of and accountability for the strange, shadowy, dissembling domicile in which he finds himself. The atmosphere of alienation makes the song’s final line even more uncanny: “Say, tell me, why does its lock fit my key?”

Thus the stage is set for “Home”: on the basis of its publisher’s description a novel, on the basis of its length a novella, and on the basis of its stripped-down, symbol-laden plot something of an allegory. It tells the story of Frank Money, a 24-year-old Korean War veteran, as he embarks on a reluctant journey home. But where — and what — is home? Frank is already back from the fighting when we meet him, a year after being discharged from an integrated Army into a segregated homeland. Since then, he has wandered the streets of Seattle, “not totally homeless, but close.” He has gambled his Army pay and lost it, worked odd jobs and lost them, lived with a girlfriend and lost her, and all the while struggled, none too successfully, against the prospect of losing his mind.

The action begins with Frank literally out of action: wearing restraints in a hospital bed, faking sleep in order to avoid yet another deadening shot of morphine. Confined to the “nuthouse” by the police for an infraction he can’t remember, he plans and quickly executes his escape: first through the fire exit, thence to Zion — the A.M.E. Zion church, that is, whose sign he spotted earlier from the squad car. There he’s given shelter by Reverend Locke (the first in a succession of “locks” that, one way or another, fit Frank’s key), who helps him on his way. His destination is Lotus, Ga., which he’s been avoiding because it harbors hated childhood memories — and because he dreads facing the families of the two hometown friends whose deaths in Korea plague his dreams. What draws him back now is a letter informing him that his younger sister, Cee, is in trouble. “Come fast. She be dead if you tarry.”

But the very notion of home is bedeviled for Frank, as is the bitter running joke of his family name. Home has never offered much solace, and the Moneys have never had much dough. At age 4, Frank was forced on foot out of his first home in Bandera County, Tex., an exodus made with 14 other families under threat by men “both hooded and not” to leave within 24 hours or die. The Moneys wound up in Lotus, “the worst place in the world, worse than any battlefield,” according to Frank, to whom it appears, like its Greek counterpart, devoid of aspiration, cramped by suffocating indifference. There his parents worked 16-hour days picking cotton and planting crops, leaving Frank to protect Cee as best he could while subsisting on a daily brew of their grandparents’ cruelty and neglect. There his parents died young, one of lung disease, the other of a stroke. And there, it emerges, is where Frank must return, must deliver his ailing sister, “his original caring-for,” in hopes not only of saving her, but of saving himself: “Down deep inside her lived my secret picture of myself — a strong good me.”

What kind of selfhood is it possible to possess when we come from a spiritually impoverished home, one that fails to concede, let alone nourish, each inhabitant’s worth? This is the question Morrison asks, and while exploring it through the specific circumstances of Frank Money, she raises it in a broader sense. Threaded through the story are reminders of our country’s vicious inhospitality toward some of its own. On his way south, Frank makes use of a “Green Book,” part of the essential series of travelers’ guides for African-Americans during a more overtly racist era. On a train, he encounters fellow passengers who’ve been beaten and bloodied simply for trying to buy coffee from a white establishment. He meets a boy who, out playing with a cap gun, was shot by a policeman and lost the use of one arm. Frank is himself subjected to a random stop-and-frisk outside a shoe store. Even his lapses in sanity — what today we’d call symptoms of post-traumatic stress disorder — are presented within the metaphor of race. He has frightening episodes of color­blindness, in which “the world became a black-and-white movie screen.” 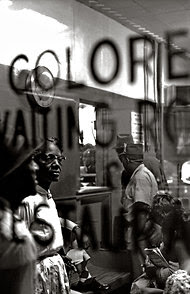 Questions about Frank’s mental stability emerge at every level of the narrative. His ex-girlfriend thinks of him as a “tilted man.” We hear his own voice in short italicized chapters occasionally advising, correcting and rebuking the omniscient ­narrator. Are these signs that he’s regaining ­psychic integrity, a sense of self-­authorship, or are they evidence of his further disintegration? Even as he begins to shed his ­hallucinations and shoulder responsibility, he worries that he may yet be rendered ­helpless, “imprisoned in his own strivings.” When self-preservation demands renouncing dreams, acting on behalf of one’s desire is inherently dangerous.

And then there’s that guy in the zoot suit. Small in stature, clad in pale blue balloon trousers, wide-brimmed hat, pointy shoes — the whole shebang — this silent fellow first turns up, to Frank’s amusement, sitting next to him on the train. Later, less amusingly, he appears at Frank’s bedside, then vanishes before his eyes. We assume he’s a manifestation of Frank’s precarious mental state, a symbol of his shaky grip on his own sense of manhood, as though Frank is compensating for his feelings of degradation by inventing a model of exaggerated visibility. We operate on this belief until the final pages, when the blue-clad man reappears with a twist I won’t give away, except to say that it recasts our assumptions and deftly underscores the book’s most powerful proposition: that there is no such thing as individual ­pathology. At times, “Home” displays its meanings with all the subtlety of a zoot-suiter. We are told that Frank and Cee’s grandmother “was the wicked witch” to their “Hansel and Gretel.” Frank witnessed much carnage in Korea and, we learn, “It changed him.” The women who nurse Cee with root medicine, common sense and blackberry jam “took responsibility for their lives, and for whatever, whoever else needed them.” After Cee gains a measure of self-respect, her relationship with her brother changes: “She didn’t need him as she had before.” Such revelations read like in-text SparkNotes.

The book doesn’t need them. Part of Morrison’s longstanding greatness resides in her ability to animate specific stories about the black experience and simultaneously speak to all experience. It’s precisely by committing unreservedly to the first that she’s able to transcend the circumscribed audience it might imply. This work’s accomplishment lies in its considerable capacity to make us feel that we are each not only resident but co-owner of, and collectively accountable for, this land we call home. (source: New York Times)