"The Floating Dungeon: A History of the Slave Ship" 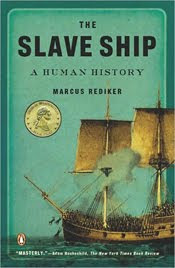 The missing link in the chain of American slavery

For more than three centuries slave ships carried millions of people from the coasts of Africa across the Atlantic to the New World. Much is known of the slave trade and the American plantation complex, but little of the ships that made it all possible. In The Slave Ship, award-winning historian Marcus Rediker draws on thirty years of research in maritime archives to create an unprecedented history of these vessels and the human drama acted out on their rolling decks. He reconstructs in chilling detail the lives, deaths, and terrors of captains, sailors, and the enslaved aboard a “floating dungeon” trailed by sharks. From the young African kidnapped from his village and sold to the slaver by a neighboring tribe; to the would-be priest who takes a job as a sailor on a slave ship only to be horrified by the evil he sees; to the captain who relishes having “a hell of my own,” Rediker illuminates the lives of people who were thought to have left no trace.

This is a tale of tragedy and terror, but also an epic of resilience, survival, and the creation of something entirely new, something that could only be called African-American. Marcus Rediker restores the slave ship to its rightful place alongside the plantation as a formative institution of slavery, as a place where a profound and still haunting history of race, class, and modern capitalism was made.

Watch video of Marcus Rediker, professor of history at the University of Pittsburgh, speaking on "The Floating Dungeon: A History of the Slave Ship" at the Vanderbilt Law School March 10, 2009.
Posted by Ron at 1:52 PM 1 comment: 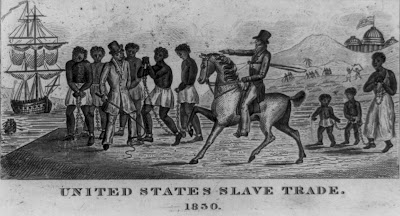 Comments
An engraving, captioned "United States Slave Trade. 1830" which shows slaves in shackles, whites holding whips; capital dome in Washington, D.C. is in background. The Library of Congress notes for this illustration indicate it was an abolitionist print, "possibly engraved in 1830; more details on its origin are also given in the Prints and Photographs Online Catalog. 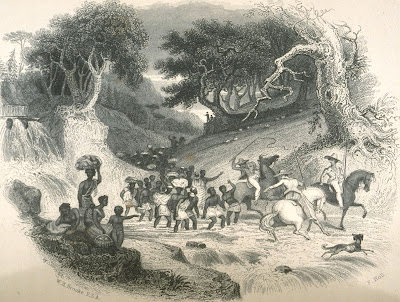 Caption, "Gang of Slaves journeying to be sold in a Southern Market"; illustrates the domestic slave trade in the U.S. James Buckingham viewed this scene in September, 1839, a few miles from Fredericksburg. "It was in a valley ," he wrote, "that we met a gang of slaves, including men, women, and children, the men chained together in pairs, and the women carrying the children and bundles on their march to the south.

The gang was under several white drivers, who rode near them on horseback, with large whips, while the slaves marched on foot beside them; and there was one driver behind, to bring up the rear . . . . They were chained together for precaution, rather than punishment; because when accompanied by one or two white men . . . they might be tempted to rise against them in any solitary part of the road, or, at the very least, escape from them if they could. . . " (pp. 552-553). Secondary sources which reproduce this image sometimes, without citing the original source, caption this "crossing the Rapidan" river, but the author does not identify the body of water shown in the illustration; moreover, given the route that he describes having taken, it is unlikely it was the Rapidan 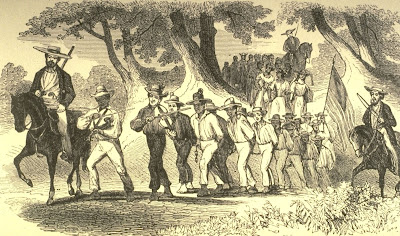 Comments
Caption, "The Coffle Gang"; led by white on horseback and black musicians at the front. An eye-witness account of the scene depicted in this illustration is given on pp. 164-65 of this abolitionist book; the scene described is of "about forty men, all chained together. . . . Behind them were about thirty women, in double rank, the couples tied hand to hand...." 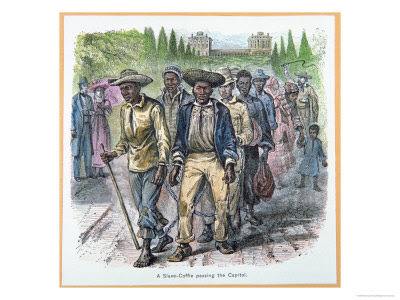 Slave Coffle, Washington, D.C., ca. 1819
Wood engraving, captioned "A Slave-Coffle passing the Capital" and depicting slaves wearing handcuffs and shackles passing the U.S. Capital, meant to depict a scene ca. 1819.
This image was intended to illustrate part of a debate in the U.S. House of Representatives in 1819, concerning the admission of Missouri to the Union. The representative from New York, James Tallmadge, Jr., proposed that as a condition of admission slavery not be permitted in Missouri "except of those already held as slaves."
While the debate was going on, Tallmadge pointed out that the South wanted Missouri to be a slave state and that a "striking illustration of what the South" wanted was to be viewed at that moment in front of the Capital. Apparently, as the debate was in progress "a trafficker in human flesh . . . has passed the door of your Capital . . . driving before him about fifteen of these wretched victims of his power. The males . . . were handcuffed and chained to each other, while the females and children were marched in their rear, under the guidance of the driver's whip" (p. 265).
Posted by Ron at 6:43 AM 1 comment: