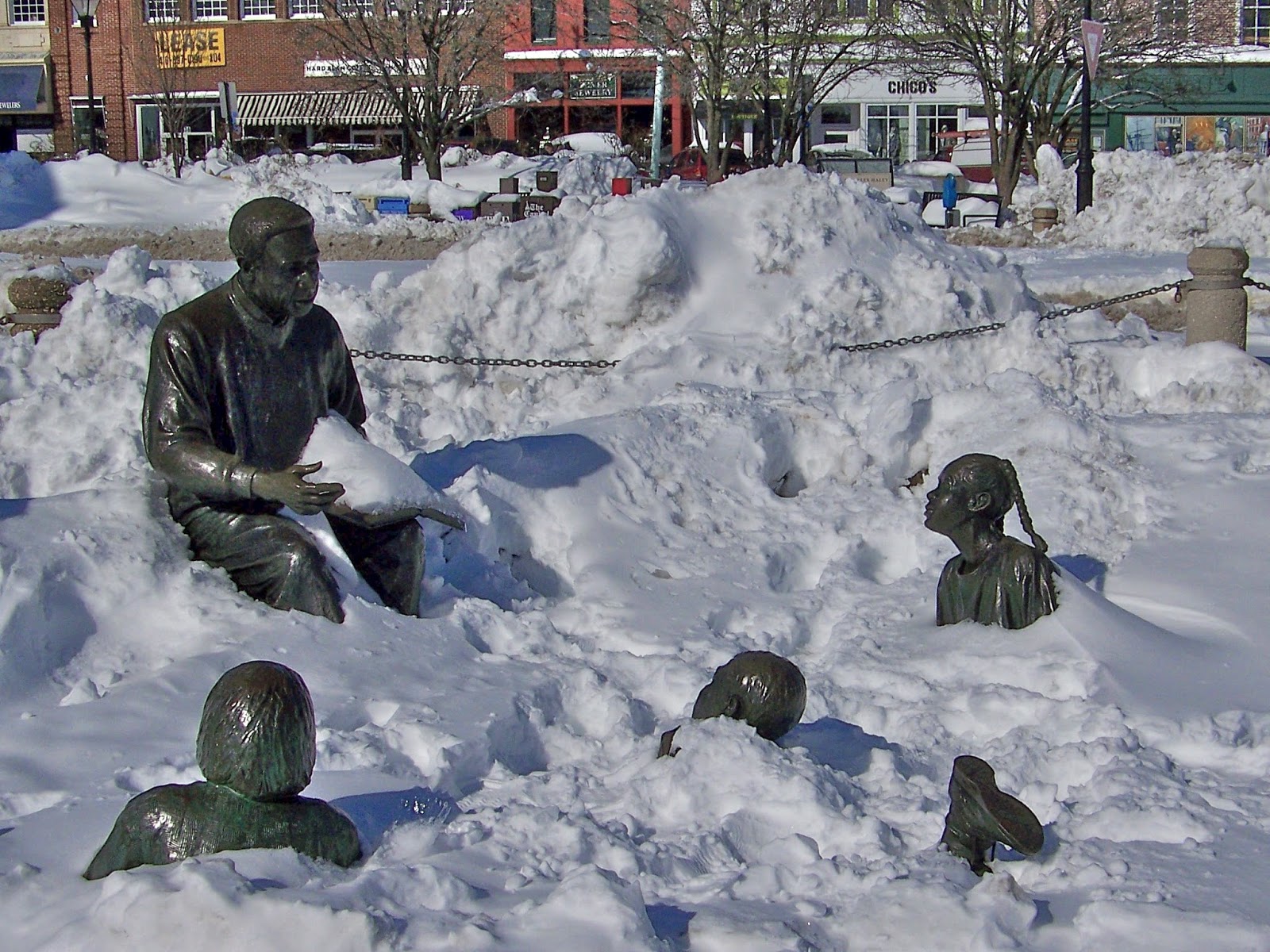 According to the Maryland Capital Gazette, "Alex Haley statue is city’s unofficial storm gauge," by Staff Writer Elisha Sauers, on 5 November 2012  --  As the tide spilled over the bulkhead at Annapolis Harbor, water pooled at the ankles of the bronze statue seated on the seawall.

The three unnamed children gathered at the statue’s feet, also cast in metal, waded in deeper. One bathed up to her waist during Hurricane Sandy last week; the boy lying on his belly needed a kickboard.

As if it were a rain gauge, the Kunta Kinte-Alex Haley Memorial has become the unofficial yardstick for flooding at City Dock.

When Harbormaster Flip Walters said the water could rise 4½ feet during the storm, it conjured up little more than blank stares from landlubbers. But Monday morning, when Walters said, “Alex Haley will have to change his socks,” we knew what he was talking about.

The dockside statue has become iconic. Photographs of the statue submerged in high water and snow drifts proliferate on the Internet during major Chesapeake Bay weather events.

At the height of Sandy, a picture snapped by an Associated Press photographer went global when it landed in a slideshow for The New York Times.

An international audience has always been curious about Haley.

Since 2002, a Web camera anchored on the second floor of the Historic Annapolis Foundation’s museum store has shown a live feed of tourist traffic around the sculptural group. About 100,000 viewers check up on Haley every year from a website for the sculptures.

On Monday and Tuesday, people from hundreds of thousands of miles away could log onto their computers and watch Sandy dousing Haley, wetting the pages of his open book.

Greg Stiverson, president of the Kunta Kinte-Alex Haley Foundation, said every time the camera requires rebooting, he gets far-flung email urging him to fix it.

“It’s always someone from England or Italy — never someone from Annapolis,” Stiverson said. “It’s just astonishing how many of those people are from Europe. Wouldn’t you think they had something better to do?”

The $750,000 sculptural group, dedicated in 1999, commemorates “Roots” author Alex Haley and his African ancestor, Kunta Kinte, who came to America on a slave ship almost 250 years ago. That ship, the Lord Ligonier, docked in Annapolis.

The memorial shows Haley reading stories about his heritage to three children of different ethnicities.

More than 1,700 miles away, in Denver, Ed Dwight paused from work in his art studio Thursday to think about how the Haley sculpture weathered last week’s hurricane.

“You’re lucky this time,” he said. “One time it covered his head.”

But the Haley statue — the one he carefully aged to encourage a green patina in the creases of Haley’s clothes and knuckles — has a special place in his heart.

Dwight grew up across the street from Haley’s brother, George Haley. Dwight was eager for the the opportunity to immortalize the Pulitzer Prize-winning author and create a piece of art that would heal racial wounds.

Dwight sometimes gets photographs of the Annapolis statue in the mail. One day it’s of a child sitting in Haley’s lap; the next it’s a picture of him almost completely underwater.

“It does kind of freak you out, and you have a sense of loss for a minute or two,” Dwight said. “But then you come around and say, ‘Well, the thing is still there.’”

Funny photos of the statue give Dwight a feeling of satisfaction. He remembers residents complaining at City Council meetings a few years ago that the statue would destroy the waterfront view and crowd the dock. Now it’s a landmark woven into the city’s fabric, with real children sitting cross-legged beside the ones in bronze.

Chris Haley, Alex Haley’s nephew, works at the Maryland State Archives in Annapolis as the research director for the state’s slave history. He remembers a time an orange life vest was strapped onto the statue before a storm.

“I know he was thankful,” Chris said.

Earlier this year, the state gave the foundation a $36,000 grant to clean the statue. The brackish water in Spa Creek leaves crusty bits on the sculptures and accelerates their discoloration. The restoration was completed last month.

After Hurricane Isabel in 2003, the foundation received a $20,000 grant from the Federal Emergency Management Agency to restore the damaged sculptures. For a few hours during that devastating storm surge, as the tide crept up Main Street, the statues were completely underwater.

Many people remember the photos taken of Haley with only his head showing.

Although locals may be used to seeing the statue sitting in a pool, consultants working on redevelopment plans for the harbor area say there’s no reason it has to be like this.

Chris Jakubiak, one of the consultants, said backflow preventers on the main drainage pipes, a pumping station onsite and a taller seawall would shore up the infrastructure. If Annapolis already had those in place, the bulkhead might not have overflowed at all during the hurricane, Jakubiak said.

Some have casually discussed elevating the statues or relocating them so they’re not in the path of flooding. For many Annapolitans, however, the idea is ludicrous.

During the storm on Tuesday, Hayes-Williams watched a TV station provide live pictures of the tide rising at City Dock. What she saw annoyed her.

“They kept showing Annapolis at the end where the Harbor Queen sits, and I’m yelling at the TV, ‘You idiots! Don’t you know how we measure the water in Annapolis?’” she said. “That’s how you know the people who aren’t from around here.”

Stiverson agreed. Many maritime towns have a building or a post that benchmarks the tide rolling in, but the Haley statue is unique.

“We’ve always said, when it’s lapping on his lap, you know you’re in trouble,” he said.
[http://m.capitalgazette.com/news/annapolis/alex-haley-statue-is-city-s-unofficial-storm-gauge/article_3aefb519-c87f-5ff0-93cb-939d7d186c3a.html?mode=jqm]