The African Banjo and American Music 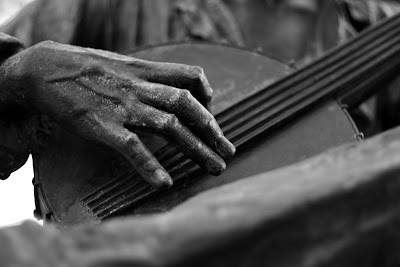 First introduced to the United States by African Americans in southern slave communities, the early banjo was construed with a gourd head and four gut or vine strings. Early, relatively primitive designs of the instrument are African in origin and modern (designs) vaguely resemble these early versions. The banjo was introduced to Anglo-American culture in the early nineteenth century. 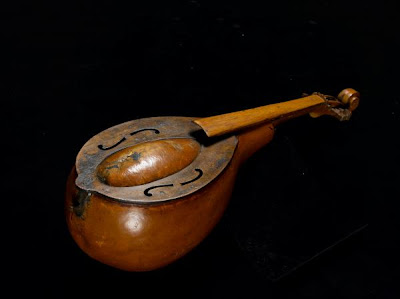 It quickly underwent important changes in structure and construction. The gourd head used in the African and early forms of the instrument was replaced by a wooden rim design. By 1850, some forty years after the date believed to signify the initial crossover into Anglo-American culture, the gourd sound chamber design had almost entirely disappeared. 1 In the mid-nineteenth century, the addition of a fifth “drone” string proved to be the most significant adaptation. It is not clear whether this development occurred in African American or Anglo-American playing circles.

Fretless 19th century banjo
Regardless of who made this modification, the impact on the playing style of the instrument cannot be understated. The fifth string fundamentally altered the way the banjo was played and the sound that it produced. It was this alteration that brought the banjo from an African instrument to what John and Alan Lomax described as “America’s only original folk instrument.” (source: North Carolina Craft Revival)
THE FIFTH STRING 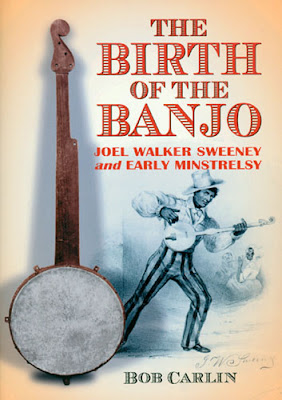 Joel Walker Sweeney of The Sweeney Minstrels, born 1810, was often credited with the invention of the short fifth string. Scholars know that this is not the case. A painting entitled The Old Plantation painted between 1777 and 1800 shows a black gourd banjo player with a banjo having the fifth string peg half-way up the neck. If Sweeney did add a fifth string to the banjo it was probably the lowest string, or fourth string by today's reckoning. This would parallel the development of the banjo elsewhere for example in England, where the tendency was to add more of the long strings with seven and ten strings being common. Sweeney was responsible for the spread of the banjo and probably contracted with a drum maker in Baltimore, William Boucher, to start producing banjos for public sales. 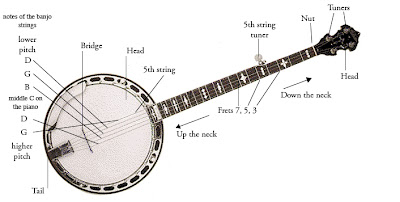 These banjos are basically drums with necks attached. A number have survived and a couple of them are in the collections of the Smithsonian Institute in Washington. Other makers like Jacobs of New York or Morrell who moved his shop to San Francisco during the Gold Rush, helped to supply the growing demand for the instrument in the mid 1840s as the minstrel shows traveled Westward to entertain the gold diggers. (source: Bluegrass Banjo) 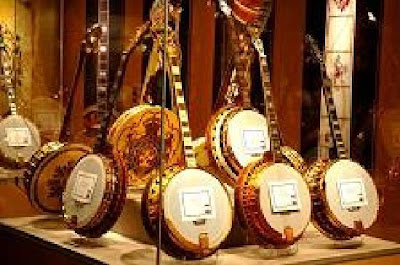 Perhaps no other instrument has been more deeply associated with the mountains of the southeast than the banjo. Through Hollywood portrayals, media stereotyping, and the recent rise in popularity of Bluegrass music, the banjo has become became inextricably linked to the people of the southern Appalachians.
EARLY STAGES
Banjos belong to a family of instruments that are very old. Drums with strings stretched over them can be traced throughout the Far East, the Middle East and Africa almost from the beginning. They can be played like the banjo, bowed or plucked like a harp depending on their development. These instruments were spread, in "modern" times, to Europe through the Arab conquest of Spain, and the Ottoman conquest of the Balkans. The banjo, as we can begin to recognize it, was made by African slaves based on instruments that were indigenous to their parts of Africa. These early "banjos" were spread to the colonies of those countries engaged in the slave trade. 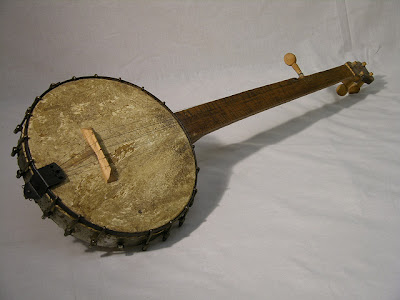 Scholars have found that many of these instruments have names that are related to the modern word "banjo", such as "banjar", "banjil", "banza", "bangoe", "bangie", "banshaw". Some historians mention the diaries of Richard Jobson as the first record of the instrument.. While exploring the Gambra River in Africa in 1620 he recorded an instrument "...made of a great gourd and a neck, thereunto was fastened strings." The first mention of the name for these instruments in the Western Hemisphere is from Martinique in a document dated 1678. 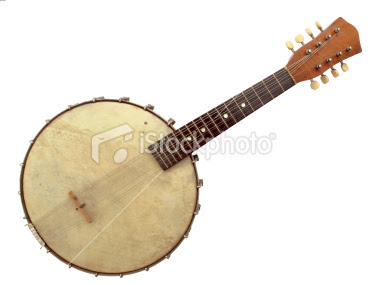 It mentions slave gatherings where an instrument called the "banza" is used. Further mentions are fairly frequent and documented. One such is quoted in Grove's Dictionary of Music and Musicians from a poem by an Englishman in the British West Indies in 1763: "Permit thy slaves to lead the choral dance/To the wild banshaw's melancholy sound/". The best known is probably that of Thomas Jefferson in 1781: "The instrument proper to them (i.e. the slaves) is the Banjar, which they brought hither from Africa." (source: Bluegrass Banjo)
Folk America ep01 Birth Of A Nation