SLAVE WHIPPING AS A BUSINESS 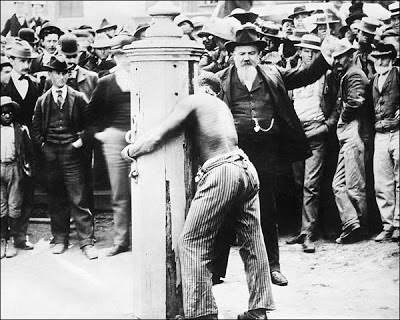 SLAVE WHIPPING AS A BUSINESS.


Whipping was done at these markets, or trader's yards, all the time. People who lived in the city of Richmond would send their slaves here for punishment. When any one wanted a slave whipped he would send a note to that effect with the servant to the trader. Any petty offense on the part of a slave was sufficient to subject the offender to this brutal treatment. Owners who affected culture and refinement preferred to send a servant to the yard for punishment to inflicting it themselves. It saved them trouble, they said, and possibly a slight wear and tear of feeling. For this service the owner was charged a certain sum for each slave, and the earnings of the traders from this source formed a very large part of the profits of his business.

The yard I was in had a regular whipping post to which they tied the slave, and gave him "nine-and-thirty," as it was called, meaning thirty-nine lashes as hard as they could lay it on. Men were stripped of their shirts in preparation for the whipping, and women had to take off their dresses from the shoulders to the waist. These whippings were not so severe as when the slaves were stripped entirely of their clothes, as was generally the case on the plantations where slaves were owned by the dozen. I saw many cases of whipping while I was in the yard. Sometimes I was so frightened that I trembled violently, for I had never seen anything like it before. (http://docsouth.unc.edu/fpn/hughes/hughes.html)