From Yale's Gilder Lehrman Center "Returning Soldiers," by W.E.B Du Bois  --  We are returning from war! The Crisis and tens of thousands of black men were drafted into a great struggle. For bleeding France and what she means and has meant and will mean to us and humanity and against the threat of German race arrogance, we fought gladly and to the last drop of blood; for America and her highest ideals, we fought in far-off hope; for the dominant southern oligarchy entrenched in Washington, we fought in bitter resignation. For the America that represents and gloats in lynching, disfranchisement, caste, brutality and devilish insult—for this, in the hateful upturning and mixing of things, we were forced by vindictive fate to fight also.

But today we return! We return from the slavery of uniform which the world's madness demanded us to don to the freedom of civil garb. We stand again to look America squarely in the face and call a spade a spade. We sing: This country of ours, despite all its better souls have done and dreamed, is yet a shameful land.

And lynching is barbarism of a degree of contemptible nastiness unparalleled in human history. Yet for fifty years we have lynched two Negroes a week, and we have kept this up right through the war.

It disfranchises its own citizens.

Disfranchisement is the deliberate theft and robbery of the only protection of poor against rich and black against white. The land that disfranchises its citizens and calls itself a democracy lies and knows it lies.


It has never really tried to educate the Negro. A dominant minority does not want Negroes educated. It wants servants, dogs, whores and monkeys. And when this land allows a reactionary group by its stolen political power to force as many black folk into these categories as it possibly can, it cries in contemptible hypocrisy: "They threaten us with degeneracy; they cannot be educated."


It has organized a nation-wide and latterly a world-wide propaganda of deliberate and continuous insult and defamation of black blood wherever found. It decrees that it shall not be possible in travel nor residence, work nor play, education nor instruction for a black man to exist without tacit or open acknowledgment of his inferiority to the dirtiest white dog. And it looks upon any attempt to question or even discuss this dogma as arrogance, unwarranted assumption and treason.

This is the country to which we Soldiers of Democracy return. This is the fatherland for which we fought! But it is our fatherland. It was right for us to fight. The faults of our country are our faults. Under similar circumstances, we would fight again. But by the God of Heaven, we are cowards and jackasses if now that that war is over, we do not marshal every ounce of our brain and brawn to fight a sterner, longer, more unbending battle against the forces of hell in our own land. 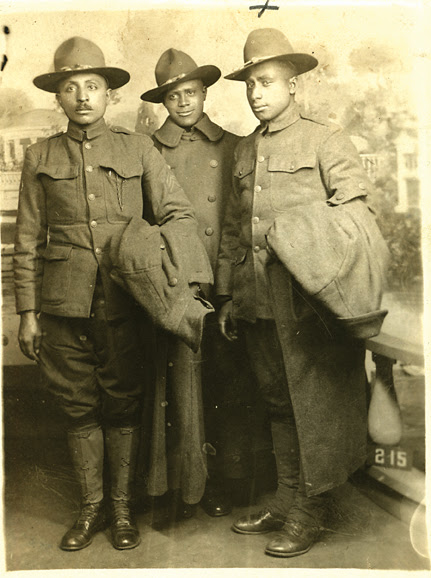 
Make way for Democracy! We saved it in France, and by the Great Jehovah, we will save it in the United States of America, or know the reason why. [Citation Information: W.E.B Du Bois, "Returning Soldiers," The Crisis, XVIII (May, 1919), p. 13.]
Posted by Ron at 1:15 PM