Jim Crow and the Exclusion of African Americans from Congress, 1887–1929

The Negroes’ Temporary Farewell
Jim Crow and the Exclusion of African Americans from Congress, 1887–1929
A Generation Lost

For a long generation, lacking a single black Representative or Senator and absent direction from a line of ambivalent or hostile Presidents, the parties in Congress deferred—sometimes scuttled—meaningful civil rights protections and the consideration of equal educational and economic opportunity. Southern politicians routinely and loudly invoked the threat of federal intervention in southern race relations to stir the electorate, but the specter amounted to little more than a harmless bogeyman. In sharp contrast to the Reconstruction Era, Congress adopted a hands-off approach to the issue of race in the South during the early decades of the 20th century, with few exceptions. A handful of dogged reformers such as Edgar Crumpacker, Leonidas Carstarphen Dyer of Missouri, and George Holden Tinkham of Massachusetts brought significant measures before the House. But congressional action consisted more of punitive threats and partisan maneuvering than of positive reaffirmations of the federal government’s commitment to the 14th or 15th Amendment.

An 11-term Representative, Leonidas Dyer of Missouri crusaded against lynching. In 1918, he introduced H.R. 11279, “a bill to protect citizens of the United States against lynching in default of protection by the States.”

Also at work were pervasive social theories that assumed the racial superiority of whites and the inferiority of blacks.96 These ideas were subscribed to not only by unreconstructed southern spokesmen of white supremacy but also by many of the most progressive minds of the era—including those in Congress who theoretically supported voting rights for southern blacks. “No one questions the superiority of the white race, but that superiority is grounded in the rugged virtues of justice and humanity,” Representative Crumpacker told colleagues. In a sense, his plan to punish states disfranchising black voters was as much about teaching recalcitrant southern whites a lesson in noblesse oblige as it was about elevating the status of southern blacks, whom he described as being “in the childhood of civilization . . . [in] want of manly virtues.” He continued, “It is surely no credit to American manhood to bind and shackle a helpless race to avoid the temporary embarrassments that would attend its proper development.”97


Congressional ambivalence toward racial legislation derived from the general disinterest of the American public and many prevalent stereotypes. By the late 19th century, popular opinion turned apathetic toward black civil rights and supportive of returning unencumbered self-governance to southerners. For many disaffected northerners, segregation and disfranchisement seemed viable—even rational—alternatives to mounting racial violence in the South. Federal inaction mirrored public complacency. In this social context, congressional inertia and a series of devastating Supreme Court rulings were “broadly reflective” of an American public that was not receptive to the concept of a multiracial society.98 As one historian concludes, the passivity of the federal government on the issue of disfranchisement enabled and encouraged other southern states to follow the example of Louisiana, Mississippi, and the Carolinas.99


By the early 20th century, the Supreme Court had essentially eroded the legal basis for black equality and bolstered states’ efforts to stringently separate the races.100 Among the high court’s most devastating rulings were Plessy v. Ferguson (1896), Williams v. Mississippi (1898), and Giles v. Harris (1903).101 In upholding the constitutionality of an 1890 Louisiana law that required rail companies to provide “equal but separate accommodations for the white and colored races,” Plessy sanctioned the system of segregation then crystallizing in the South.102 In Williams, a black man convicted of murder by an all-white jury appealed the decision based on the 14th Amendment. The Supreme Court unanimously upeld the jury’s decision, endorsing the disfranchising laws that prevented black men from serving on juries.103 Several years later, Giles upheld the grandfather clause, one of the chief disfranchising methods used at southern constitutional conventions at the turn of the 20th century.

Texan, Barbara Jordan was the first Black woman to serve in the U.S. Congress from the South.

The decline of African-American civil rights coincided with one of the nation’s most fervent bursts of social reform. Spanning the 1890s through World War I, the Progressive Era was a period when a broad and diverse group of social reformers moving from local to national arenas pushed for the modernization and democratization of American society.104 Progressives sought to advance public safety and welfare through professionalization and standardization across the spectrum of American life. Their efforts included regulating food content and production, establishing laws for child labor and guidelines for industrial safety, and implementing conservation, temperance, and even experimental welfare programs. Progressives also ushered in political reforms, including direct primary elections, the popular election of U.S. Senators, and women’s suffrage.


Though Progressivism would seem a democratizing force positioned against segregationists, in fact, the movement often complemented Jim Crow. The Progressives’ focus on the necessity for expertise provided an important rationale for limiting the franchise to voters who were deemed to be qualified.105 Order, organization, and rational decision-making within a rapidly industrializing, sometimes chaotic, society lay at the heart of the Progressive impulse and often trumped democratic reform. “Whenever general anxieties rose across the nation, followers of the bureaucratic way had to turn for help to one of the several traditional techniques for achieving tighter cohesion,” observes historian Robert Weibe. “One of the time-honored devices was exclusion: draw a line around good society and dismiss the remainder.”106 Moreover, Progressives’ obsession with scientific method spread ‘social Darwinism’ (sometimes referred to as ‘scientific racism’ or eugenics), which postulated that Anglo-Saxon social success was rooted in superior biological and evolutionary traits. The resulting rationalization of white supremacist thinking via a national political, social, and scientific movement only emboldened proponents of segregation.107 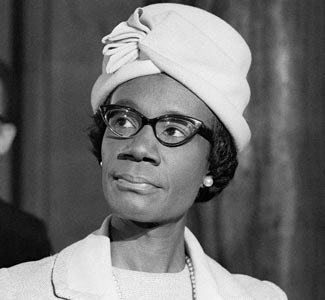 
African Americans participated as fully as possible in a society that had marginalized them. As George White once noted in a characteristically upbeat floor speech, “We are ramifying and stretching out as best we can in all departments of life, with a view to making ourselves good citizens.”108 These efforts were marked by significant milestones: the founding of advocacy groups such as the National Association for the Advancement of Colored People (NAACP) in 1909, African-American contributions to World War I, and the black intellectual and artistic flowering of the Harlem Renaissance in the 1920s. Faced with a repressive system of segregation in the South, African Americans sought new opportunities outside the region, as an ever–stronger current of southern blacks moved into northern cities. This demographic shift and the nascent political activism of northern urban blacks portended change for the future. (source: Black Americans In Congress)