Empire: From Conquest to Control


In 1884, the Berlin Conference that set off the scramble for colonies in Africa and other parts of the world laid down the basic principle that in order to establish the formal right of rule over a colony, a European power had to establish ‘effective occupation’. This applied, however, only to coastal areas, which at the time were the main concern of most European powers in Africa. The hinterland of continental Africa, which was the subject of the main phase of the ‘scramble’, was a different matter. Here, European states drew straight lines across the map with complete disregard for geographical features, delimiting the territories they claimed from one another but leaving them still to be brought under real control. In many ways the story of colonization in the 1890s and 1900s is the story of how European empires tried to convert paper colonies into real colonies.

In my last lecture I noted how in some cases this attempt met with failure, most notably with the Italian invasion of Ethiopia in 1896. Similarly, the Boxer rebellion in China deterred European powers from converting treaty ports into hubs of real colonization. But these were exceptions. In most of Africa, and many parts of the Pacific, European powers moved from the 1890s onwards to establish their control over the land they now claimed as their own. 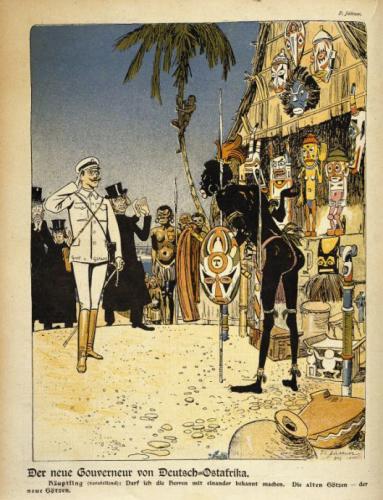 What drove them to do so were two separate but ultimately intermeshing influences. The first was ideological. The 1880s ushered in the age of empire, the decades of imperialism – a word that first entered the English language in the 1870s and was, as J. A. Hobson noted in 1900, ‘on everybody’s lips…used to denote the most powerful movement in the current politics of the western world’. Imperialism was propagated by governments keen to gain popular support for the principle of maintaining, usually at some cost, overseas possessions. The cult of empire began in Britain already in the 1870s with the proclamation of Queen Victoria as empress of India. Within a few years, British royal ceremonies, including Queen Victoria’s golden and diamond jubilees and the coronation of King Edward VII in 1902, were featuring maharajas and colonial troops. As the Daily Mail reported in 1897, the diamond jubilee procession displayed ‘new types, new realms at every couple of yards, an anthropological museum – a living gazetteer of the British Empire. With them came their English officers, whom they obey and follow like children’. Huge publicity was given to the ceremonies – durbars – held in India in 1877 to proclaim Queen Victoria Empress of India, and in 1902 and 1911 to celebrate the coronation of her successors. 1902 saw the inauguration of ‘Empire Day’ in Britain, especially directed at schools, and imperial propaganda could be found everywhere, on railway bookstalls, in political meetings, in novels, magazines and history books and even in the ‘empire plate’ manufactured for the Diamond Jubilee in 1897. The coronation of Edward VII in particular was given a strong imperial flavour, to celebrate, as a contemporary put it, ‘the recognition, by a free democracy, of a hereditary crown, as a symbol of the world-wide dominion of their race’. 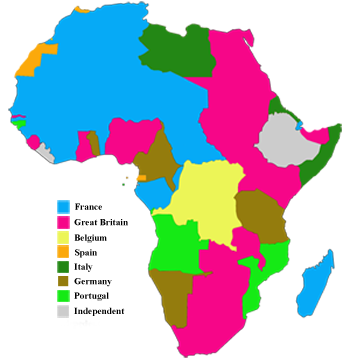 International expositions, a tradition inaugurated by Britain’s Great Exhibition of 1851, began to include ‘colonial pavilions’ – 18 of them at the Paris exposition of 1889, clustering around the Eiffel Tower that had been specially built for the occasion.Colonial museums opened in most European countries to display looted artifacts, and most remarkably perhaps, zoos began to include ‘native villages’ among their exhibits. Hagenbeck’s Tierpark in Hamburg for example showed a series of African and other indigenous groups to gawping crowds of visitors who – at a safe distance, to avoid the danger of physical contact - could observe the ‘primitive world’ that Germany had conquered in Africa. 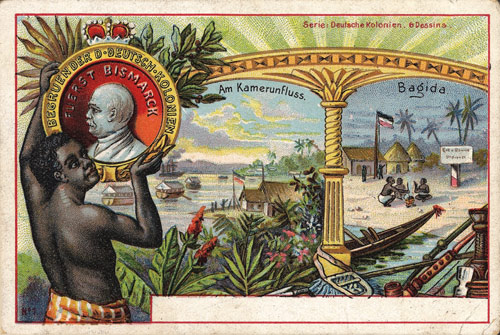 In Belgium in the 1880s and 1890s exhibitions were held including a typical Congolese village, where imported Africans were told to do what they normally did at home, which was mostly not much, since at home they would have been out hunting or in the fields. A pool was provided and stocked with fish, and spectators threw coins in for the Congolese to dive for. Sometimes they threw in bottles of gin and brandy too, to make them drunk. Sometimes stages were set up for the men to re-enact battles with spears and shields. The Congolese had to go around half-naked in a display of ‘authenticity’ and in cold weather many of them became ill. Such displays were put on to underline European superiority, so there was no interest in, for example, getting the villagers to make or display artworks or put on musical events. In a similar way, Buffalo Bill’s enormously popular Wild West Show, which toured Europe at this time, demonstrated the inferiority of Native Americans, doomed to extinction in battle with the better armed forces of civilization.


European notions of superiority were caricatured but also reaffirmed in cartoons of the time: here for example is one portraying a new governor of German East Africa as a ‘new idol’ replacing or perhaps just adding to the ones already worshipped by the native heathens.All this served to enlist the middle classes and potentially too the working classes in patriotic enthusiasm for the ideals of empire, a tactic that was more successful in some countries, notably Britain, than others. The press followed colonial campaigns closely and whipped up jingoistic sentiment, expressed in events such as the triumph of the British over the Ashanti in the 1870s.Imperial enthusiasm reached new heights with the emergence of mass-circulation newspapers like the Daily Mail, fuelling events such as the popular celebrations in London of the relief of Mafeking during the Boer War.The age of high imperialism coincided with the coming of the age of mass communications and the popular press, and both fed off each other. 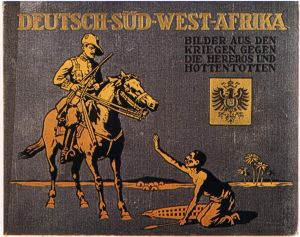 The events of the Boer War pointed to the other major force apart from imperialist ideology driving forward European powers’ establishment of control over their colonies, and that was, the actions and policies of men on the ground, in the colonies themselves. For most of the nineteenth century it was missionaries, traders and explorers who brought in the colonizing state to further their interests or, more frequently, to rescue them when they got into trouble with indigenous peoples. In some colonies, however, in the age of high imperialism, European settlers began arriving in ever increasing numbers and, with or without the approval of the colonial state, seizing land for cattle farming or rubber or palm oil plantations. The clashes such actions sparked were among the most violent in the history of European empire. And nowhere were they more dramatic than in the German colony of South-west Africa, today’s Namibia.


South-west Africa had begun as a protectorate run by a limited company, but as early as 1888 the company failed and the state was obliged to take over. Much of the land was desert or semi-arid and was inhabited by nomadic cattle herders of the Herero and Nama tribes. During the 1890s German settlers moved in and began setting up cattle ranches, fencing off the land from the nomads, whose livelihood was also being undermined by an outbreak of a fatal cattle disease, Rinderpest, at the end of the 1890s. The rapidly mounting pace of land seizures by the colonial government in the early 1900s led eventually to attacks on German farmers, resulting in around 150 settler deaths by 1904, when the attacks reached a peak. Kaiser Wilhelm II took this as a provocation, even a personal insult. Germany was not going to be humiliated as Italy had been in Ethiopia in 1896. 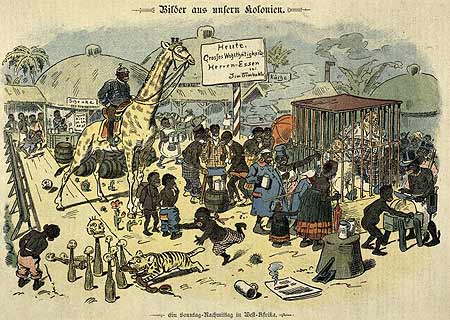 14,000 German troops were dispatched from Berlin under General Lothar von Trotha, a hard-line Prussian army officer with previous colonial experience. ‘I know’ he said, ‘that African tribes yield only to violence. To exercise this violence with crass terrorism and even with gruesomeness was and is my policy.’ After defeating a Herero force at Waterberg, Trotha announced: ‘Any Herero found inside the German frontier, with or without a gun or cattle, will be executed.’ Herero cattle-herders caught in the action were shot or hanged on the spot, while the remaining men, along with Herero women and children, were driven into the desert and left to starve. The few who emerged alive were little more than skeletons, as this contemporary photograph shows (see powerpoint).The Chief of the General Staff in Berlin, Alfred von Schlieffen, in thrall, like all Prussian officers, to the supposedly Clausewitzian doctrine that the aim of a war must be the total annihilation of the enemy force, praised von Trotha’s campaign as ‘brilliant’, especially his use of the desert to complete what he called approvingly ‘the extermination of the Herero nation’. Popular commemorative books were printed celebrating the triumph of German arms in the war. (source: Gresham College, UK)