Traveling in a hammock, Belgian Congo [Photograph taken or provided by Émile Gorlia (1887-1966)] Hammocks carried by African porters were an important means of transportation for Europeans during the colonial period. Some African leaders also used palanquins and other carrying devices as symbols of their status.

From Forbes Magazine, "Tintin's Racist Past," by Lionel Laurent, on 23 July 2007 --LONDON - When British lawyer David Enright opened the pages of a comic book entitled Tintin In The Congo while in a shop with his wife and two young boys, he was probably expecting a benign adventure story full of fun for all the family.

Instead what he found was a "highly offensive" collection of racist caricatures of Africans, from superstitious natives to incoherent simpletons, and in a letter of complaint he demanded that the Borders bookstore in his hometown of St. Albans stop selling the comic book.

Tintin is Belgium's most famous export, with over 200 million copies of his adventures sold worldwide. In May Variety even reported that co-founder of DreamWorks Steven Spielberg and Peter Jackson were planning a Tintin trilogy, no doubt tempted by the $3 billion gross raked in by Jackson's Lord of the Rings movies. Could one angry British lawyer derail the reputation of a true comic book hero? 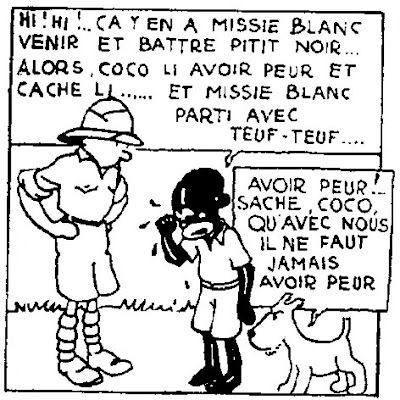 The incident has snowballed into a very British scandal, with the Commission for Racial Equality backing Enright and demanding that all Borders stores take Tintin's Congolese adventures off their shelves. Now even the police are involved, with the Hertfordshire police deciding to record Enright's complaint as a "racist incident."

Borders' response has been to move all copies of the comic to the "adult graphic" section of the store from the childrens' section, but the book seller refused to stop selling it outright. 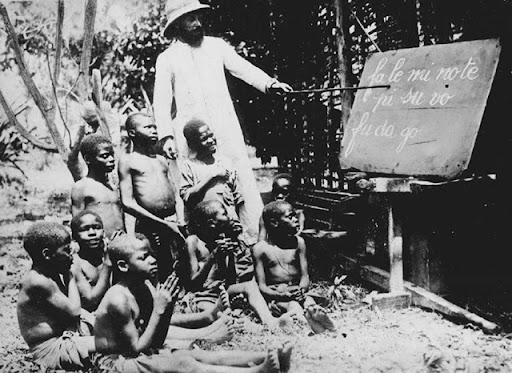 It's not the first time accusations of racism have been leveled against Hergé, the late Belgian cartoonist who created the iconic orange-haired reporter known as Tintin. When the character first appeared in Tintin In The Land Of The Soviets at the end of the 1920s, he stood for conservative, Catholic values, showing up the godless credo of communism. It is no accident that in his second adventure in 1931, Tintin In The Congo, the intrepid reporter is saved from the snapping jaws of angry crocodiles by a bearded Catholic missionary dressed in white.

But Hergé himself regretted his early work, as well as his personal attachment to a Catholic abbot with fascist sympathies called Norbert Wallez. In an interview released in 1983, the artist said: "The fact is that while I was growing up, I was being fed the prejudices of the bourgeois society that surrounded me. It's true that Soviets and Congo were youthful sins. I'm not rejecting them. However, if I were to do it again, they would be different."

Democratic Republic of Congo (Belgian Congo) - Kuba King "Dr. William Henry Sheppard (1865-1927), an African American missionary for the American Presbyterian Congo Mission, who later became an outspoken critic of King Léopold's regime, was the first overseas visitor to reach the kingdom's capital in 1890. The Kuba, famous for their arts, subsequently attracted many visitors, ranging from anthropologists to photographers, who sought to depict the legendary kings, the visual splendor of the royal court and important chiefs, among them Chief Ndombe of Bieeng. Casimir Zagourski, who traveled through the royal capital in the 1930s, took a classic, often-published portrait of then ruler Kot Mabiinc (ruled 1919-1939), who was paralyzed. Eliot Elisofon (1911-1973), an American photographer who worked for Life magazine, followed in Zagourski's footsteps in 1947, creating evocative portraits of Kot Mabiinc's successor, Mbop Mabiinc maMbeky (ruled 1939-1969). Photographic encounters in the capital became commonplace and orchestrated--grand performances for the cameras of the Westerners. Kuba kings used the opportunity to further the reputation of the Kuba as the foremost artists in central Africa." (flicker)

Tintin In The Congo did not even make it to the U.K. until 2005, over 70 years after its first appearance in French, because of the controversy surrounding it. When the publisher Egmont finally released the English version, it billed it as an "essential volume for collectors," making sure to wrap a label around the comic that warned readers of its potentially "offensive" content.

And the huge divide between post-colonial Britain and Belgium in the 1930s, when the kingdom still owned the Congo, adds to the shock of today's reader discovering Tintin's adventure for the first time. The story is filled with witch doctors, lazy natives who need to be put to work and over-the-top violence against animals.

According to Mark Rodwell, representative of Moulinsart--the firm that manages Hergé's estate--this explains why children ignorant of the past don't have the same reaction.

"The criticism is that it's not suitable for children," he told Forbes.com. "But it's the adults that have the problem with it. It's a book of its time." (source: Forbes)