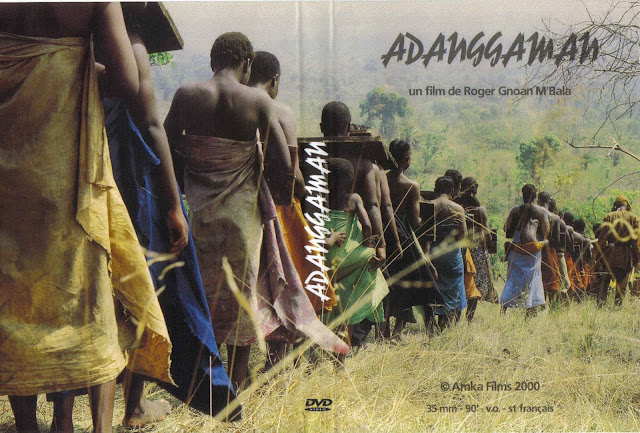 From the New York Times, on 11 July 2001, "Film Review: Africans Making Slaves of Africans," by Elvis Mitchell--The historic drama ''Adanggaman,'' which starts a two-week run at Film Forum today, is about an African whose village is captured and its inhabitants forced into slavery by the African collaborator Adanggaman (Rasmane Ouedraogo). Traitorous and arbitrary, Adanggaman has a round face that constantly calls out for the rum the Dutch traders ply him with.

The film's Ivory Coast-born director, Roger Gnoan M'Bala -- who wrote the screenplay with Jean-Marie Adlaffi and Bertin Akaffou -- blends truth and fiction, and the storytelling is so simple that its directness feels fresh and rousing. The scenes of Africans marching in chains and stocks, monitored by other Africans, are a shock and linger in your mind for days afterward.

Mr. M'Bala has found a novel way of involving the audience. He uses rhythms and songs and other types of sounds throughout the picture for aural texture to contrast with the horrors on screen; there's a lovely and unforgettable song over the opening credits with gentle strumming and chants. His use of sound is a shrewd gambit, and his rejection of the noisy and oppressive crunch of the too loud sound mixing we hear in most American films pays off.

In this 17th-century story of the oppressive slave trading among African tribes, we're introduced to Ossei (Ziable Honore Goore Bi) by hearing his voice in the distance. The camera slowly moves over to the spot where he pleads with and eventually cajoles his girlfriend into delaying her afternoon fishing trip for an exploration of another type. Afterward, as she goes off to join the fishing group -- who cast man-size nets into the waters as they chant folk rhythms -- he peeks out of the brush with a sly smile on his face. He's a man used to getting what he wants.

And he doesn't want to marry Adjo (Nicole Suzis Menyeng), the woman his family -- with the exception of his mother -- is determined to pair him off with. His mother, Mo Akassi (Albertine N'Guessan), tries to be a bit more understanding, if only because she's annoyed by tribal sanctimony. But for the most part, there's ridicule about Ossei's affections for one of a lower class: ''The bad blood of that slave will not tarnish our noble blood.''

Ossei refuses the forced marriage at the last minute, and he's beaten and banished. He trails off into the wilderness, alone and ashamed. After Ossei wanders off, his village is attacked, his father and girlfriend and others are slain and the remaining villagers are taken as slaves. The pillagers are led by a group of women in orange robes with close-cropped hair and ridges of braids studded with white shells across the top. In one of the most upsetting scenes, the young village women scoot across the ground on their haunches and scream as they're being circled by the invaders.

Mr. M'Bala uses lots of long shots to communicate the action, instead of punching up ''Adanggaman'' with stuttered editing to contrive tension. He lets the film work at its own pace, though there is an opening jolt as we see one of Ossei's tribesmen being bound and gagged. The image of an African being trussed up for servitude by other Africans is deeply discomforting, and Mr. M'Bala exploits the power of that rare image.

Ossei plots to free his mother and tracks the movements of the native slavers. His mission is the beginning of his maturation from brat to motivated adult, woven into one of the many gripping plot turns the movie takes. The narrative motion is tricky; first it canters, then shifts into a heady, quick gallop. What's most fascinating about ''Adanggaman'' are the scenes that feel like anecdotal rest stops but that are actually building into a nuanced and engrossing whole.

Adanggaman is an unblinking look at an under acknowledged underside of African history: the active role of black Africans in supplying human cargo for the European slave trade. Deftly blending fact, myth, and personal drama, the story centers on Ossei, a strong-willed young man forbidden by his father from marrying the lower-caste woman he loves. When his village is pillaged by slave traders, Ossei sets out after the raiding party, his quest leading him to the stronghold of the dreaded King Adanggaman, an arrogant despot who thrives on the slave trade and uses fierce female warriors to enforce his power.

One of these Amazons, herself a former slave, falls in love with Ossei, and the couple escape into the bush, where they lead a paradisiacal but precarious existence in the shadow of Adanggaman's vengeance. Though presented with fable-like clarity, the film's analysis of traditional African life is subtle and ambivalent: the seemingly idyllic village society is built upon a structure of patriarchal authority and caste discrimination that already contains the seeds of Adanggaman's greater tyranny.

A particularly fascinating historical sidelight shows women in positions of strength and skill, both as fisherwomen in Ossei's village and as formidable warriors in Adanggaman's army. Africa is shown to contain extraordinary possibilities for both freedom and tyranny, and the film's power derives from the way it places an inspiring dream of independence alongside a bitter account of that dream's betrayal. (source: New Yorker Films)