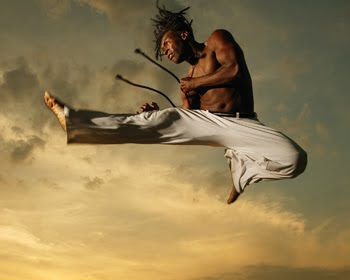 Born out of an ever present need to protect themselves in a hostile environment, Africans enslaved in Brazil practiced a martial art now called Capoeira. Its methods were sneaky, the results often brutal and when needed, deadly.
Capoeira was and is composed of cat like movements where participants collapse to the ground, use cartwheels, flips, handstands and many other deceptive movements to avoid strikes and injury by opponents. Practitioners use kicks, sweeps, head butts, gouges and punches in order to strike their opponent. All of these actions are combined to compose a devastating form of martial art which protected its ancient participants from enslavers and at times each other. 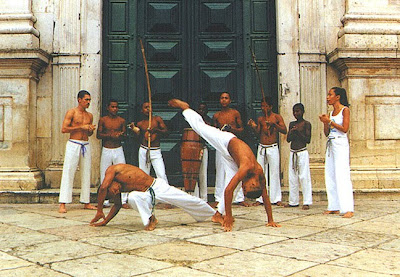 Capoeira's origins are often disputed. There are many who disagree on whether it arrived with enslaved Africans or whether Africans created it once they reached Brazil. One theory suggest that it was a courtship dance in Angola used by suitors of young women. Another suggests that it was a fighting system that was refined and evolved by Africans to its deadly form in the Brazilian slavery era. Regardless, of the final outcome of these disagreements, the ultimate truth is that no one disputes that it is an African creation.
On the numerous plantations of the Brazilian countryside, enslaved Africans practiced and used these methods to combat the malicious behavior often meted out by overseers, their crews and the slave owners. Its practitioners were able to create such force through their movements and surprise tactics that it was not uncommon for victims to be knocked out suddenly or die from it's blows. Users of this martial art also placed razors between their toes or used knives to unmercifully deal with those who chose to cross their paths. 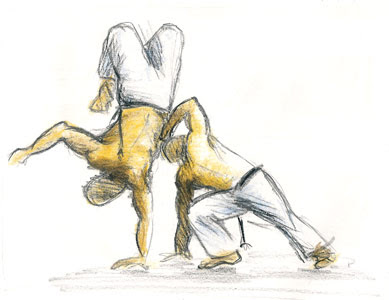 Brazilian Maroons, who were Africans who escaped slavery and formed alliances with "Native Americans", were notorious for using Capoeira against hunters, trackers and soldiers who were attempting to return them to a state of slavery. Survivors of ambushes with Maroons that involved hand-to-hand combat described scenes of mayhem, stating that the Maroons appeared from nowhere striking them with blows from angles that they could not fathom. It was not uncommon to hear of these enslavers turning tails to the wind in an attempt to escape these vicious attacks.
As a result of the deadly interactions that were occurring between Africans and the colonialists and at times injury from African participants against each other, Capoeira was banned by "slave owners" and other leading authorities. However, always creative, the community found ways to keep it alive. Capoeira was incorporated into dance movements in public and secret locations were arranged for its practice in private. 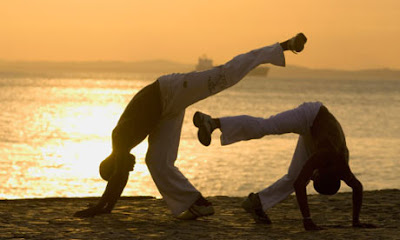 The actions of the Africans to practice their martial art whenever and however they could ensured the survival of Capoeira throughout Brazil's history of African enslavement. After the banning of slavery in 1888, Brazil continued to ban its practice and it was wildly viewed as a martial art practiced by "thugs" and "criminals". Fortunately, many African Brazilians and other Brazilians who realized its true value and history did not allow the criminalization of their martial art and continued to practice Capoeira.
Despite restrictions, the official ban of Capoeira could not last and the will of the people defeated the will of the state. And without such restrictions the martial art of Capoeira has evolved into the form which is practiced today. Elements of the dance and martial art have both survived to create an experience which is both mesmerizing as well as instructive. 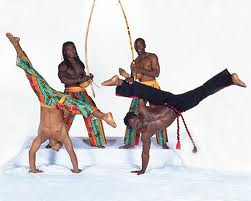 Practitioners of Capoeira gather in a circle, called a roda, and those who surround the contestants sing, clap and play musical instruments such as the berimbau (string instrument) and drums. Then the contestants perform a movement called the Ginga (jinga), where they move around each other, almost like a dance, in order to disorient their opponent. After this point it is open season on both opponents, as contestants leap into an array of deceptive offensive and defensive movements against each other. As one contestants leaves the circle another immediately takes his place. This interaction between the group continues until the group decides to disband. I must admit that my descriptions of this ancient African art does not do it justice.
In conclusion, it is my intention that the role of Africans in Capoeira and in the evolution of martial arts should not be ignored, forgotten or denied. The bravery of its practitioners in the past to protect their freedom and in the present to maintain their traditions is a testament to the fact that true greatness can be suppressed but never destroyed.
(source: http://www.cwo.com/~lucumi/capoeira.html)
Posted by Ron at 7:19 AM