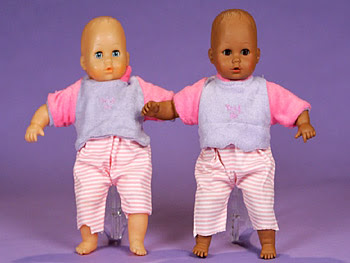 This panel met at Howard University to discuss the black doll - white doll test. For those who are unfamiliar, the famous doll test was a survey taken years ago, where black school age children where asked positive and negative questions about black and white dolls. To sum things up, the kids overwhelmingly preferred the white dolls. The test was run again recently with the same results. 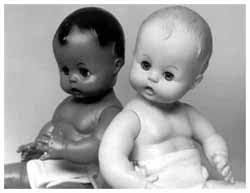 Visit msnbc.com for Breaking News, World News, and News about the Economy

MSNBC's panel needs improvement. In that, it is understandable that MSNBC's intended to get a well rounded diverse panel to discuss race, but they missed the mark. Chris Rock's wife is not a scholar. Although she's seems to be quite active with charity work, but she needed to be a black female counterbalance to Dr. Michael Eric Dyson. There are some great black female scholars like Dr. bell hooks, Dr. Alice Walker, Dr. Toni Morrison, and Dr. Francis Cress that have written, researched, published, and presented scholarly works on black female images and popular culture.

One more criticism on this panel. Who the hell invited the police! I guess if we're gonna talk about black folks then we need to call the cops. WTF! While I can deal with Chris Rock's wife, and Micheal Eric Dyson......the cops are just too much. It just subliminally reinforces the criminal stereotype of blackness. Negrophobia propaganda rears it's evil head once again.

Lastly, why the heck is Mike Barnacle on the panel? If MSNBC must give a white male voice, there are some excellent scholars on the subject like Eric Foner, David Bryon Davis, David Blight, et al.

If MSNBC is going to teach, then there are some great professors that do this for a living they should cast their nets a little wider for panel discussions.
Posted by Ron at 11:03 AM