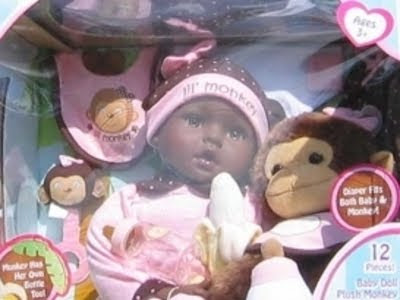 Costco Wholesale Corp. on Thursday apologized to any of its customers who may have been offended by a doll the company pulled from its stores after a complaint about possible racist connotations.

The doll wore a headband that said "Lil' Monkey" and was cuddling with a stuffed monkey. The "Cuddle with Me, Doll with Plush Monkey" doll came in Caucasian, African-American and Hispanic representations.

But shortly after the toys were put up for sale in late July, Costco received a complaint from a customer in North Carolina concerning the version of the doll that showed an African-American baby with the monkey.

Costco immediately pulled the doll from its shelves and discontinued the product. The Issaquah, Wash.-based retailer said the doll was carried only in its Northeast and Southeast regions and the company's Web site and was only for sale for a matter of days before it was pulled.

A number of reports and Web sites have criticized the retailer for carrying the product, and Costco said it apologizes.
Posted by Ron at 8:31 AM