When The Commies Came To Harlem

From the New York Times Nonfiction In Brief, by Richard J. Margolis is a columnist for The New Leader. Diane McWhorter is a freelance writer in Cambridge. Judith Davison is a freelance writer in Washington, published on 2 October 1983 --  Soon after the 1929 stock market crash, Earl Browder, general secretary of this country's Communist Party, ordered that black people be placed ''in the foreground'' of the party's attempts to organize unemployed workers. Thus began a decade of intense Communist proselytizing in Harlem as well as other black centers, efforts that saw the Communists winning quite a few battles but finally losing the war. Mark Naison, who directs the urban studies program at Fordham University, gives us the details in ''Communists in Harlem During the Depression,'' a scholarly work distinguished by compassion for all who joined the black struggle, regardless of ideological stripe.

Mr. Naison might have called his book a tale of two neighborhoods, the other being the Kremlin. For events in Harlem seemed as much determined by policies formulated in Moscow as by politics practiced in New York. The Comintern line that the oppression of blacks was a natural consequence of capitalist imperialism permitted Harlem's Communists to take the lead in protesting the 1931 conviction in Alabama of nine black youths, the Scottsboro boys, on charges of raping two white girls. ''More than any single event,'' Mr. Naison writes, the campaign to free the Scottsboro boys ''marked the Communist Party's emergence as a force in Harlem's life.''

The Communists' Popular Front strategy, enunciated in 1935 and aimed at binding liberals to radicals in a broad struggle against fascism, further strengthened the party's hand in Harlem. As Mr. Naison points out, the Popular Front ''made the Party's program and rhetoric indistinguishable from that of many black liberals'' and ''brought Communists an easy acceptance in community affairs that had been denied them in the past.'' But the acceptance was seldom wholehearted or widespread. Mr. Naison estimates that even in the peak years, 1935 through 1939, no more than 2,000 Harlem residents ever joined the party, with perhaps another 3,000 becoming members of affiliated groups. 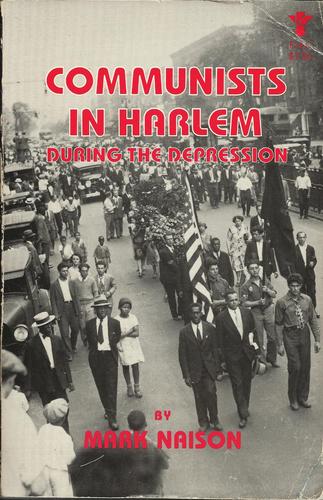 One gets the impression that Communism was entirely too abstract and alien a doctrine to appeal to most black Americans. For one thing, it preached a brand of interracialism that made many Harlem residents uncomfortable; for another, it scoffed at organized religion in a neighborhood that cherished its storefront churches. What Mr. Naison says so movingly about Harlem during pre-Depression days probably applied in some measure to the Depression years as well: ''The courtly manners of the old folks, the laughter of the children, the sweet talk of the hustlers, the banter of teen-age stickball players, and the purposeful movements of working men and women provided an almost impenetrable background to the speeches of Communist soapboxers, filled with images of 'class struggle' and 'revolution.' '' As Martin Luther King Jr. would demonstrate a few decades later, there is more than one way to start a revolution.  (source: The New York Times)