The High Price of inequality

From the New York Times, "Separate and Unequal," by Thomas B. Edsall on 3 August 2012  --  Joseph E. Stiglitz’s new book, “The Price of Inequality,” is the single most comprehensive counter­argument to both Democratic neoliberalism and Republican laissez-faire theories. While credible economists running the gamut from center right to center left describe our bleak present as the result of seemingly unstoppable developments — globalization and automation, a self-­replicating establishment built on “meritocratic” competition, the debt-driven collapse of 2008 — Stiglitz stands apart in his defiant rejection of such notions of inevitability. He seeks to shift the terms of the debate.
It is not uncontrollable technological and social change that has produced a two-tier society, Stiglitz argues, but the exercise of political power by moneyed interests over legislative and regulatory processes. “While there may be underlying economic forces at play,” he writes, “politics have shaped the market, and shaped it in ways that advantage the top at the expense of the rest.” But politics, he insists, is subject to change. 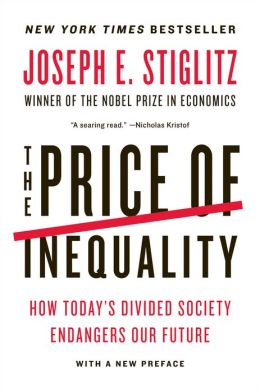 Stiglitz is a Nobel laureate and a professor of economics at Columbia (where I too teach, but we are not personally acquainted). He holds a commanding position in an intellectual insurgency challenging the dominant economic orthodoxy. Among his allies are Jacob S. Hacker and Paul Pierson (the authors of “Winner-Take-All Politics: How Washington Made the Rich Richer — and Turned Its Back on the Middle Class”); Lawrence Lessig (“Republic, Lost: How Money Corrupts Congress — and a Plan to Stop It”); Timothy Noah (“The Great Divergence: America’s Growing Inequality Crisis and What We Can Do About It”) and Paul Krugman (“End This Depression Now!”). The collective argument of these dissidents is not only that inequality violates moral values, but that it also interacts with a money-driven political system to grant excessive power to the most affluent. In short, those with power use it to insulate themselves from competitive forces by winning favorable tax treatment, government-­protected market share and other forms of what economists call “rent seeking.”
Conservative advocates of pure free markets, in this view, fail to acknowledge how concentrated economic power converts into political power. The right, for example, has hailed the evisceration of the estate tax and the lifting of restrictions on campaign contributions, despite evidence that such policies work to restrict competition — by further concentrating wealth in the case of the estate tax, and by further empowering corporate America to control political decisions in the case of campaign finance.
Stiglitz and his allies argue that a free and competitive market is highly beneficial to society at large, but that it needs government regulation and oversight to remain functional. Without constraint, dominant interests use their leverage to make gains at the expense of the majority. Concentration of power in private hands, Stiglitz believes, can be just as damaging to the functioning of markets as excessive regulation and political control. The importance of Stiglitz’s contribution (and that of other dissidents) to the public debate cannot be overestimated. The news media and the Congress are ill-­equipped to address the role of economic power in shaping policy. Both institutions are, in fact, unaware of the extent to which they themselves are subject to the influence of money.
Stiglitz describes the economic capture of regulatory authorities by the interests under their jurisdiction — and the more subtle intellectual capture of policy makers of all kinds. The calculated and purposeful shaping of public discussion allowed conservative analyses to dominate debate in the years before the collapse of 2008, and in the years since they have been dominant as well.
It is not just democratic politics that is threatened by huge disparities in wealth and income. Much of Stiglitz’s book is devoted to demonstrating that excessive inequality amounts to sand in the gears of capitalism, creating volatility, fueling crises, undermining productivity and retarding growth. Just as discrimination results in the failure of a nation to make the best use of all its citizens, inequality, when it leads to inadequate schooling, housing and neighborhood conditions for large numbers of people, acts in a similarly destructive fashion.

Stiglitz succinctly summarized his own argument in a recent online column: “Inequality leads to lower growth and less efficiency. Lack of opportunity means that its most valuable asset — its people — is not being fully used. Many at the bottom, or even in the middle, are not living up to their potential, because the rich, needing few public services and worried that a strong government might redistribute income, use their political influence to cut taxes and curtail government spending. This leads to underinvestment in infrastructure, education and technology, impeding the engines of growth. . . . Most importantly, America’s inequality is undermining its values and identity. With inequality reaching such extremes, it is not surprising that its effects are manifest in every public decision, from the conduct of monetary policy to budgetary allocations. America has become a country not ‘with justice for all,’ but rather with favoritism for the rich and justice for those who can afford it — so evident in the foreclosure crisis, in which the big banks believed that they were too big not only to fail, but also to be held accountable.”
Stiglitz wrote “The Price of Inequality” at the height of the uprisings in Tunisia, Libya and Egypt, and the Occupy Wall Street movement here in the United States. These revolts against established power helped make him optimistic about the prospect of change in the future. But he seems more sanguine at the beginning of his book — “There are moments in history when people all over the world seem to rise up, to say that something is wrong” — than at the end, which concludes on a note of warning: “Time, however, may be running out. Four years ago there was a moment” — the 2008 election — “where most Americans had the audacity to hope. Trends more than a quarter of a century in the making might have been reversed. Instead, they have worsened. Today that hope is flickering.”

Circumstances in the summer of 2012 justify Stiglitz’s more apprehensive conclusion. Prospects for programs boosting public investment are virtually nil. Republicans stand a good chance of taking control of both branches of Congress after the next election. Their presumptive presidential nominee, Mitt Romney, may capture the White House. If so, his tax and regulatory proposals will most likely embody all that Stiglitz finds repugnant. Even if Romney loses, the American political system does not appear ready to respond to Stiglitz’s call to arms.
Stiglitz may prove most prescient when he warns of a society governed by “rules of the game that weaken the bargaining strength of workers vis-à-vis capital.” At present, he says,“the dearth of jobs and the asymmetries in globalization have created competition for jobs in which workers have lost and the owners of capital have won.” We are becoming a country “in which the rich live in gated communities, send their children to expensive schools and have access to first-rate medical care. Meanwhile, the rest live in a world marked by insecurity, at best mediocre education and in effect rationed health care.” Except for a brief period in 2008-9, when the stock market decline hit the wealthy the hardest, the trends would seem to be moving toward Stiglitz’s pessimistic vision of the future, with little prospect of change no matter who wins office on Nov. 6.  (source: The New York Times, Thomas B. Edsall, the Joseph Pulitzer II and Edith Pulitzer Moore professor at the Columbia School of Journalism, writes a weekly online column for The Times.)