From the Los Angeles Times, "The Year Thanksgiving Was Canceled: The storybook image of Pilgrims and Indians is not only false; it ignores their war, which activists now celebrate," on 27 November 1997, by|Jill Lepore, an assistant professor of history at Boston University and the author of "The Name of War: King Philip's War and the Origins of American Identity."

Plymouth Rock will probably take a beating today. In the small Massachusetts seaport where the Mayflower dropped anchor, Indian rights activists may once again gather to dump sand on one of America's most famous monuments. In years past, while the people of Plymouth have marched in an annual Thanksgiving Day parade called "Pilgrims Progress," protesters have attempted to bury racism by burying the rock.

Burying Plymouth Rock may sound like a very '90s thing, the kind of multi-culti, PC protest much mocked on right-wing talk radio (Rush Limbaugh could easily get a full hour of air time out of it). But burying Plymouth Rock is nothing new. A Pequot Indian minister named William Apess first recommended burying the rock in 1836, just 16 years after Daniel Webster stood on the newly unearthed boulder and declared, "Forever honored be this, the place of our fathers' refuge." Apess urged "every man of color" to mourn the day the Pilgrims first set foot in North America--and to get their shovels ready. A century and more later, Malcolm X agreed: "We didn't land on Plymouth Rock, my brothers and sisters; Plymouth Rock landed on us."

Like Plymouth Rock, Thanksgiving has long been labeled racist, a claim that at first seems paradoxical since our mythical first Thanksgiving celebrates a vision of racial harmony: Pilgrims in black and buckles settling down alongside Indians in feathers and moccasins to feast on turkey and cranberries. As any historian will tell you, there's plenty wrong with this picture (silly costumes, dubious menu--you name it). But activists protesting Thanksgiving have been less offended by Americans' picture-book fantasy of that peaceful feast in 1621 than by its overshadowing of what happened afterward: the brutality and carnage of King Philip's War. 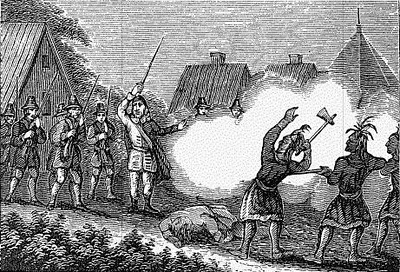 In 1836, William Apess was delivering a lecture about King Philip when he urged his audience to bury Plymouth Rock. In a 1988 essay, novelist Michael Dorris suggested that Thanksgiving is simply a "facile, ironical footnote to the real story," King Philip's War. And when Indian rights protesters buried Plymouth Rock on Thanksgiving Day 1995, they declared their act "in the spirit of King Philip."

King Philip was the son of Massasoit, the Wampanoag leader who welcomed the Pilgrims in 1620 and gave them cause to give thanks that first Thanksgiving. But by the time Massasoit died in 1662, his own people had endured four decades of fraudulent land sales and found themselves increasingly subject to the English, who forced the Wampanoags to surrender their arms. In 1675, an outraged Philip led an attempt to regain native sovereignty by driving the English from New England. He nearly succeeded: A coalition of Indians destroyed more than half of all English towns and killed at least one-tenth of the colonists. But by the end of 1676, native resistance had been crushed: Thousands of Indians had been killed or captured and shipped to the Caribbean to be sold as slaves, including Philip's 9-year-old son, Massasoit's grandson. That August, Philip himself was hunted down and drawn and quartered.

It's easy to see why Indian activists consider Philip a hero. Apess declared King Philip's War "as glorious as the American Revolution," compared Philip to George Washington and pronounced him unequivocally "the greatest man that was ever in America." But the irony of using King Philip's War to reject Thanksgiving is that during the war, there was no thanksgiving. The Puritans gave no thanks because there was little to be thankful for; even their cherished sense of themselves as a chosen people was in question. Instead of religious days of thanksgiving, they flocked to church week after week to hold days of fasting and humiliation.

It was not until the summer of 1676, with an English victory at hand, that colonists once again observed days of thanksgiving. Of these, the most joyful was held in Plymouth on Aug. 17, 1676, just days after Philip's death, when victorious soldiers arrived in Plymouth carrying Philip's head on a pole. It must have been the centerpiece of the thanksgiving celebration. As one Puritan put it, God had given Philip's head "to be meat to the people inhabiting the wilderness . . . the very day of their solemn festival."

March into Plymouth with King Phillip's head on a pole.


Thinking about Philip's head on a pole won't help anybody's appetite on this, our day of feasting. But the story of King Philip's War, the dark underside to the story of Thanksgiving, bears telling. There's no need to follow the colonists' lead and cancel Thanksgiving, but perhaps, in our giving of thanks, we can learn from their Days of Humiliation and retain a sense of humility about the contradictions of American history. Because, in the end, it is the contest over our colonial heritage, between Malcolm X's rock and Daniel Webster's that tells us the most about who we are.

If protesters sink their spades into the sand at Plymouth today, they will not bury racism, because burying the past can never be the answer. No matter how deep the pit, we can never really bury Plymouth Rock. (source: Los Angeles Times,)