Voter Suppression Could Swing the Election

From Yes! Magazine, "How Voter Suppression Could Swing the Election: It won’t be easy to protect our votes from being sidelined and stolen this year, but here are a few simple things we can do," by Greg Palast, on 24 August 2012  --  In more than 100 years, there has not been a single case of voter identity fraud in the state of Indiana. Yet, in 2008, 145,000 legitimate voters there were turned away from the polls because they could not produce the photo IDs acceptable to state officials on a crusade against “voter fraud.”

Approximately two out of three of those voters were black. Ten of them were black and white (nuns from the Sisters of the Holy Cross). One nun, aged 98, had given up her driver’s license as had her “younger” sisters.

Now, 16 states have passed voter ID laws similar to Indiana’s. The story is that legislators are trying to stop an epidemic of people voting under false names or casting the ballots of dead people. But nobody’s come up with more than a tiny handful of cases where that’s happened. Taking away the votes of hundreds of thousands of people to stop one or two fake votes is like killing a flea with a shotgun.

Moreover, no fewer than 68,029 Indiana citizens, and 488,136 voters nationwide, had their absentee ballots thrown out on nutty technicalities like using the wrong size envelope or crossing out a bubble instead of filling it in.

In all, my fellow investigator, Robert F. Kennedy Jr., and I found that more than 5.9 million citizens were wrongly barred from voting or having their ballots counted in 2008.

Nonetheless, Indiana, birthplace of the Ku Klux Klan, was won by a black man, Barack Obama, despite the massive number of votes tossed and voters turned away.

That happened because in Indiana, and nationwide, a massive turnout of African-American voters and record registration of young voters—both groups that are hugely affected by voter ID laws—overcame efforts to block votes. Because of all the attacks on voting I’ve reported, I’ve been asked, “Why bother? If they’re going to steal my vote, then why should I vote at all?”

It won’t be easy to protect our votes this year—estimates say the new restrictions could again disenfranchise as many as 6 million people. But Dr. Martin Luther King Jr. protected the votes of African-Americans when voting while black meant risking your life. Our task in 2012 is far easier. 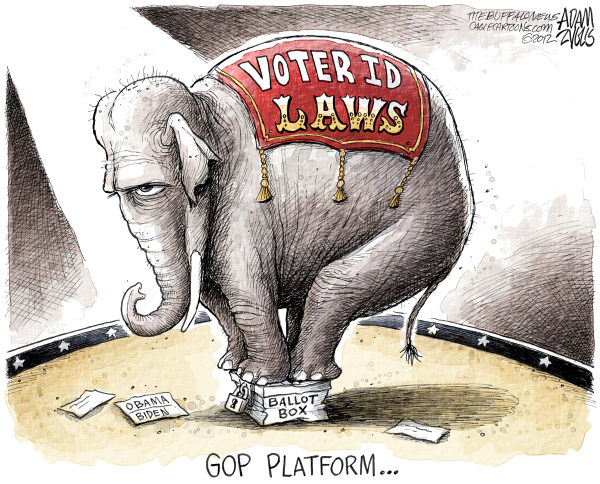 How To Ask Candidates Questions
That Make a Difference
Tips for spreading your ideas without getting the runaround.


Do you live in a state with new ID laws? Find out what ID you need, and figure out a way to get it. It may not be easy—but that’s the point. They’re hoping that people will just throw up their hands—and throw away their votes. Do you vote at one address and register a car at another? That’s asking for trouble. Have you added your middle initial to your signature? Well, don’t.

Read the instructions on your absentee or mail-in ballot. If they tell you to fill in a bubble, don’t cross it out. If they say to use a pencil, don’t use a pen. It may seem like trivial stuff, but it killed almost half a million votes last time. 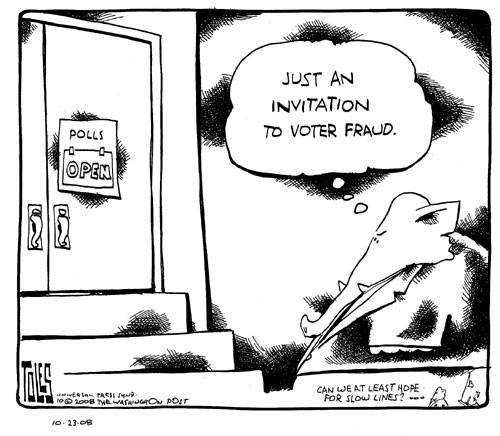 The people who don’t want your vote to count are counting on you to give up easily. Don’t do it. We can work to fix the laws after the election. But right now, the most important thing is to find out what rules are in place and make sure you follow them.

Get informed—then get going. Voting is for We the People, not Them the Ballot Bandits. (source: Yes! Magazine)

[Greg Palast wrote this article for It's Your Body, the Fall 2012 issue of YES! Magazine. Greg is a widely published investigative reporter and author of several books. His latest, Billionaires & Ballot Bandits, a look at the role of big money in the current election, features comics by Ted Rall. BallotBandits.org]
Posted by Ron at 12:11 AM