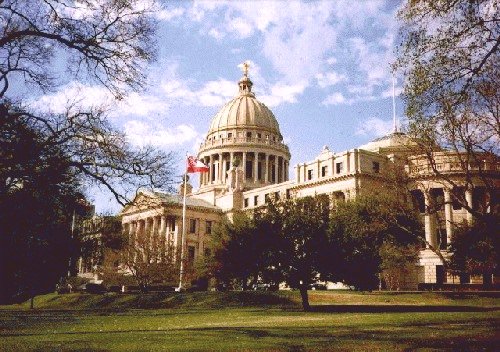 Mississippi elections had always been violent as whites tried to prevent blacks from voting, and many courageous blacks and whites who opposed Democratic rule were murdered. To end this violence, a compromise was reached between the planters and their challengers. Blacks would be constitutionally disfranchised and corruption and violence at the polls would stop. A constitutional convention was called to theoretically legally disfranchise all illiterate voters. But everyone knew the real purpose. James Kimble Vardaman, later Governor of the state, boasted of the obvious purpose of the convention. "There is no use to equivocate or lie about the matter. Mississippi's constitutional convention was held for no other purpose than to eliminate the nigger from politics; not the ignorant -- but the nigger."

James Kimble Vardaman:  "There is no use to equivocate or lie about the matter. Mississippi's constitutional convention was held for no other purpose than to eliminate the nigger from politics; not the ignorant -- but the nigger."

Whites warned blacks not to interfere in the change. Marsh Cook, a white Republican in Jasper County, courageously challenged the Democrats for a seat to the Constitutional Convention in spite of death threats. Cook was ambushed and murdered on a lonely country road -- one of the first whites to be killed after Reconstruction for advocating the black vote, according to his great-great-granddaughter Kitty Cook Hoyt. Isaiah Montgomery, founder of Mound Bayou and the only African American delegate to the convention, had been invited because he was willing to support disfranchisement. Blacks were outraged at Montgomery's speech. They called Montgomery a "traitor" and "Judas" for not challenging disfranchisement. The delegates rewrote the constitution. It required all voters to take a literacy test if they tried to vote.

"On and after the first day of January, A. D. 1892, every elector shall, in addition to the foregoing qualifications, be able to read any section of the constitution of this state; or he shall be able to understand the same when read to him, or give a reasonable interpretation thereof." Power was given to registrars to interpret the test. Since all registrars were white and politically appointed, it was highly unlikely they would allow any black to pass the test on his own merits. The Supreme Court chose to disregard the fact that the new law was aimed at disfranchising blacks. "Besides, the operation of the constitution and laws is not limited by their language or effects to one race. They reach weak and vicious white men as well as weak and vicious black men, and whatever is sinister in their intention, if anything, can be prevented by both races by the exertion of that duty which voluntarily pays taxes and refrains from crime." Once the court gave the Mississippi constitution its blessing, other states adopted the same means to disfranchise blacks.  (source: PBS)