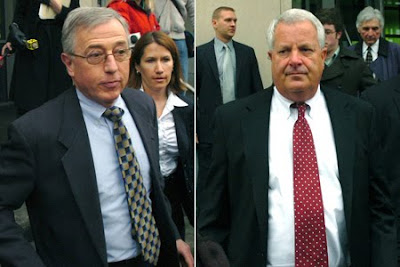 
"Judge tells of perverted justice in Luzerne juvenile cases," by William Ecenbarger, on November 10, 2009, from The Philadelphia Inquirer--WILKES-BARRE – The judge who studied Luzerne County’s “cash-for-kids” scheme said yesterday that children’s constitutional rights had been denied and justice perverted “in ways that I would never have dreamed possible.”

Judge Arthur E. Grim of Berks County, who reviewed transcripts of about 100 cases of juveniles caught up in the scheme, said the scandal grew out of “unfettered power, greed, opportunity, and intimidation.”

Lawyers, court employees, and school officials knew of the scheme, but winked at it for convenience or self-preservation, Grim testified. 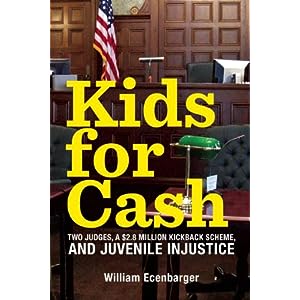 He described his findings to the Interbranch Commission on Juvenile Justice, an 11-member panel named by Gov. Rendell, legislative leaders, and the state Supreme Court to look into the scandal.

Grim said “an almost routine disregard for the rights of juvenile offenders” was known to lawyers, court staff, and school authorities, yet went on for six years or more.

He said many school officials supported Ciavarella’s “zero-tolerance” policies toward teenagers no matter how minor the offense.

“When a misbehaving kid was brought to school authorities, they immediately picked up the phone and called the police,” Grim testified. “They did this because they knew that if they did, that child would go before Judge Ciavarella and would be out of their hair as a problem.”

He said many court officials failed to speak out because they owed their jobs to either Conahan or Ciavarella. Under orders from Ciavarella, Grim said, officers of the Juvenile Probation Department stationed themselves outside the courtroom and persuaded parents to give up their children’s rights by signing waiver-of-counsel forms that were improper and legally defective.

Grim noted that in 2001, the state Superior Court reversed Ciavarella’s sentencing of a 13-year-old because the judge had failed to inform the defendant of his right to a lawyer.

“Judge Ciavarella vowed publicly that this would never again happen in his courtroom. This was widely known by the general public, and especially by the members of the bar. Yet Ciaverella subsequently repeated this behavior over and over again. To my knowledge, not a single member of the Luzerne County bar ever spoke out.”

He speculated that local lawyers were silent because Ciavarella was the president judge of Luzerne County Court and they feared retribution in other cases that came before him.

Grim noted that many parents who sought out lawyers to defend their children were told not to bother, because it would “only make matters worse” with Ciavarella. 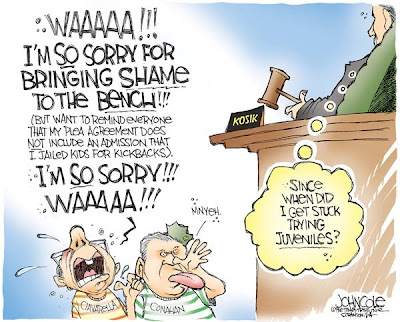 “It was common knowledge that something was rotten in Denmark,” Grim said.

The state Supreme Court appointed Grim, a senior judge, to review juvenile cases Ciavarella handled. Following his study, Grim recommended that about 6,500 convictions meted out by Ciavarella between 2003 and 2008 be overturned. In an unprecedented step, the high court adopted this recommendation on Oct. 29.

Grim said yesterday he decided to recommend throwing out nearly all the cases because so much money was involved in the kickbacks that “it was impossible for Ciavarella to be impartial.”

Ciavarella and Conahan had agreed to plead guilty, but a federal judge this summer rejected their agreements with prosecutors.

They withdrew their pleas and have been indicted again on racketeering charges.

Grim recommended that serious consideration should be given to opening Juvenile Court proceedings to the public, and to creating a system of circuit-riding judges and public defenders with special skills in dealing with juveniles. State law closes criminal court proceedings for people under 18.

Superior Court Judge John M. Cleland, chairman of the commission, emphasized in opening remarks that one of the panel’s primary goals was to discover “what it would have taken to encourage people to act” and prevent the injustices.

The commission may begin getting answers when hearings resume today, with testimony scheduled from representatives of the District Attorney’s Office, Public Defender’s Office, and Juvenile Probation Department.

Cleland also issued this plea to the people of Luzerne County:

“We know the people in this community did not consciously choose to stand on the side of injustice at the expense of children.

The hearing was in a large meeting room at a hotel outside the city. About 50 spectators, including local officials and representatives of advocacy groups, attended the day session. The crowd size doubled for the evening hearing.
[http://www.philly.com/inquirer/local/20091110_Judge_tells_of_perverted_justice_in_Luzerne_juvenile_cases.html]