The 'Kids for Cash' Scandal from 'Capitalism: A Love Story'

The Times Leader reported:  Attorney got defensive during the February 2003 ribbon-cutting ceremony for his newly opened Pittston Township juvenile detention center, saying he bit his tongue while the project was “politicized beyond belief.”

Amidst growing talk about a federal probe, Attorney Robert J. Powell announced last June he was selling his interest in juvenile detention centers in Pittston Township and in western Pennsylvania, and in a firm developing a proposed cargo airport in the Hazleton area.

``I won’t let my name be drug through the mud anymore,” Powell told the audience of more than 100 friends, family and employees.

He maintained the project wasn’t about politics or profits and said he got the idea to build a local detention center after meeting a father who was scared that his son would be placed in Luzerne County’s aging North River Street detention center.

“This was about the children,” Powell said.

But the opposite picture is portrayed in the recent federal complaint, which alleges kickbacks were paid to two Luzerne County judges in exchange for favorable judicial rulings and other actions that led to the county’s use of the Pittston Township center and another center also owned by Powell and Greg Zappala in western Pennsylvania. 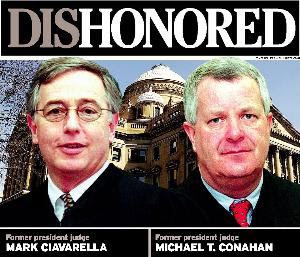 The $2.6 million in alleged kickbacks to then judges Michael Conahan and Mark Ciavarella were made by people identified as “participant 1” and “participant 2” in the 22-page complaint. Details in the paperwork indirectly identify Powell as participant 1.

Powell, who is 49 and a Hazleton area native, has declined requests for comment in recent days. Standing well over 6 feet, Powell attended St. Francis College on a basketball scholarship, receiving his law degree from the New England School of Law, according to the law firm Web site.

He was admitted to the Pennsylvania Bar in 1987 but didn’t noticeably crack into government work until the mid-1990s.

Powell’s sudden chain of public hirings generated cries of politics from some taxpayers, who questioned whether his selection was linked to political campaign donations.

Around that time, Powell was also hired as West Hazleton and Hazleton City solicitor and as bond counsel for a Hazleton Area School District construction/renovation project and the Luzerne County Convention Center’s proposed arena project.

County minority Commissioner Stephen A. Urban complained in 2001 that Powell was hired for county bond work without a public vote or discussion.

Powell’s involvement in PA Child Care, which built the Pittston Township detention center, was discovered by a reporter through mortgage documents in April 2002 – nine months after the court sent county commissioners the original proposal to lease the building.

Urban complained that Powell should have fully disclosed his involvement in the project to all three county commissioners from the beginning, in large part because he served as planning commission solicitor until his resignation in February 2002.

Powell ignored repeat written and verbal notices from county officials – including the county solicitor – to file financial disclosure forms as required by the state Ethics Commission covering his years of solicitorship employment with the county. These forms are supposed to publicly disclose information about real estate interests, creditors, significant gifts and direct and indirect income.

Commissioners were somewhat forced to use the Pittston Township center because Conahan announced, shortly before the center opened, that he would no longer send juveniles to the county’s River Street facility.

The firm’s Web site lists the cases, with titles such as “Jury awards injured worker $3.25 million” and “Another one! $1.7 million verdict.”

Powell showed signs of his growing wealth. He owned a 56-foot yacht named “Reel Justice,” and a 12-seat Rockwell International jet is registered at his business address, according to Federal Aviation Administration records.

In 2005, Powell and his wife, Debra, built a 7,100-square-foot home on five acres in the Ice Ponds section of Rice Township. The reassessment company has valued the property at $1.46 million.

A new moniker – John Doe – was attached to Powell in 2007 when The Times Leader discovered that county Prothonotary Jill Moran – his law partner – switched Powell’s name in her office database so he wasn’t linked to an Internal Revenue Service tax lien filed against him.

Moran said she had reason to believe the IRS filed the lien in error, but other county residents and businesses did not have the luxury of John Doe anonymity on liens filed against them.

Experts said her action was illegal. Federal officials were looking into the matter, but it’s unclear if any official action was taken against Moran. Moran later put the lien under Powell’s name in the office database.

Amidst increasing chatter about the federal investigation, Powell announced in June 2008 that he was selling his interest in the Pittston Township detention center, the western Pennsylvania center and the company developing a proposed $1.6 billion regional cargo airport in the Hazleton area.

“In the last few weeks, as some have focused on rumor and innuendo, the projects I have helped create have continued to thrive and make progress,” Powell said in a news release. “Now is the perfect time for me to step away, allow development and operations professionals to take over and begin to focus on new opportunities.”

Powell defended the Pittston Township detention center lease in his press release, saying the facility has been an “unquestioned success” for the county, taxpayers and children.

“I am very proud of the company and the hundreds of kids’ lives I have helped change for the positive,” Powell wrote. (source:By Jennifer Learn-Andes jandes@timesleader.comLuzerne County Reporter )


The 'Kids for Cash' Scandal from 'Capitalism: A Love Story' from MMFlint on Vimeo.
Posted by Ron at 4:04 PM