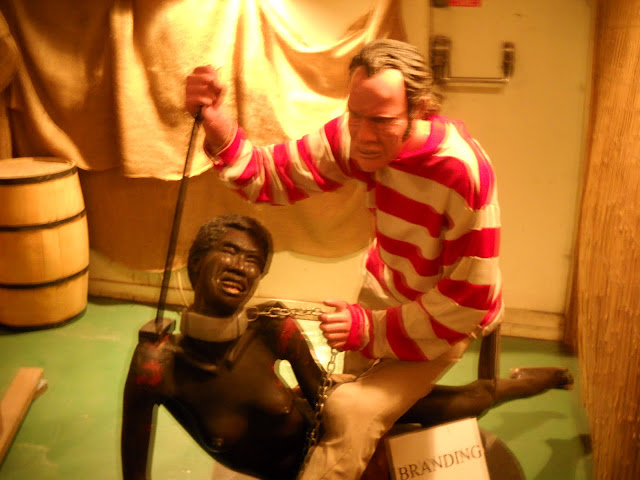 
Human branding or stigmatising is the process in which a mark, usually a symbol or ornamental pattern, is burned into the skin of a living person, with the intention that the resulting scar makes it permanent. This is achieved using a very hot or very cold branding iron.

In criminal law, branding with a hot iron was a mode of punishment by which marking the subject as if goods or animals, sometimes concurrently with a reduction of status.

Brand marks have also been used as a punishment for convicted criminals, combining physical punishment, as burns are very painful, with public humiliation, especially if marked on a normally visible part of the body, providing an indelible criminal record

The punishment was adopted by the Anglo-Saxons, and the ancient law of England authorised the penalty. By the Statute of Vagabonds (1547) under King Edward VI, vagabonds and Gypsies were ordered to be branded with a large V on the breast, and brawlers with F for "fraymaker"; slaves who ran away were branded with S on the cheek or forehead. This law was repealed in England in 1550. From the time of Henry VII, branding was inflicted for all offences which received Benefit of clergy (branding of the thumbs was used around 1600 at Old Bailey to ensure that the accused who had successfully used the Benefit of Clergy defence, by reading a passage from the Bible, could not use it more than once), but it was abolished for such in 1822. In 1698 it was enacted that those convicted of petty theft or larceny, who were entitled to benefit of clergy, should be "burnt in the most visible part of the left cheek, nearest the nose." This special ordinance was repealed in 1707. James Nayler, a Quaker who in the year 1655 was accused of claiming to be the Messiah, convicted of blasphemy in a highly publicised trial before the Second Protectorate Parliament and had his tongue bored through and his forehead branded B for 'blasphemer'.

In the 16th century, German Anabaptists were branded with a cross on their foreheads for refusing to recant their faith and join the Roman Catholic Church.

In the North-American Puritan settlements of the 17th century, men and women sentenced for having committed acts of adultery were branded with an "A" letter on their chest (men) or bosom (women). Canon law sanctioned the punishment, and in France, in royal times, various offences carried the additional infamy of being branded with a fleur de lys. In Germany however, branding was illegal.

In the Lancaster criminal court a branding iron is still preserved in the dock. It is a long bolt with a wooden handle at one end and an M (malefactor) at the other; close by are two iron loops for firmly securing the hands during the operation. The brander would, after examination, turn to the judge and exclaim"A fair mark, milord." Criminals were formerly ordered to hold up their hands before sentence to show if they had been previously convicted. In the 18th century, cold branding or branding with cold irons became the mode of inflicting the punishment on prisoners of higher rank. "When Charles Moritz, a young German, visited England in 1782 he was surprised at this custom, and in his diary mentioned the case of a clergyman who had fought a duel and killed his man in Hyde Park. Found guilty of manslaughter he was burnt in the hand, if that could be called burning which was done with a cold iron" (Markham's Ancient Punishments of Northants, 1886).

Such cases led to branding becoming obsolete, and it was abolished in 1829 except in the case of deserters from the army, which were marked with the letter D, not with hot irons but by tattooing with ink or gunpowder. [http://www.medievalwarfare.info/torture.htm]
Posted by Ron at 8:57 PM