Slaving For Virginia In The Gulf of Benin

The fishing village at the mouth of the Formosa River usually bustled with activity, but on this day in 1763 it was eerily quiet. Three people in a small canoe had come from far away and did not know the danger they were in. They might have wondered at the big ship, a brigantine, that lay at anchor a distance out in the Gulf of Benin, surrounded by ten war canoes. The Briton had come from even farther away.

It belonged to Messrs. John Welch (or Welsh) and Edward Parr, merchants of Liverpool, and was captained by William Bagshaw. The war canoes, some of them large enough to have mounted six to eight swivel guns (small cannon), had come from upriver and belonged to a man named Captain Lemma Lemma, “a kind of pirate admiral” who traded in slaves. The people who lived on the lower river considered Lemma Lemma to be “a robber or stealer of men”; everyone was “exceedingly afraid of venturing out whenever any of his war canoes were in sight.” He was an important supplier of slaves to European Guineamen [slave ships], which is why Captain Bagshaw had been entertaining him for ten days with food, drink, hospitality, and dashee, gifts to encourage sales. 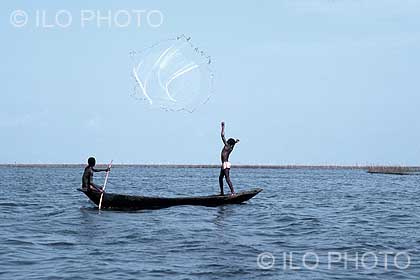 From the main deck of the slaver, Lemma Lemma spied the strangers paddling by and ordered a group of his canoemen to capture them. They deftly took to the water, seized the three—an old man, a young man, and a young woman—and brought them aboard, offering them for sale to Captain Bagshaw, who bought the younger two but refused the older one. Lemma Lemma sent the old man back to one of his canoes and gave an order: “his head was laid on one of the thwarts of the boat, and chopped off,” head and body then thrown overboard. Captain Baghsaw carried his children to Rappahannock, Virginia. [from The Slave Ship: A Human History (2007) by Marcus Rediker (pp. 88–90):]