A Visit to a Jim Crow School Fifty years ago, Ray Sprigle of the Post-Gazette posed as a black man to experience firsthand what life was like for 10 million people living under the system of legal segregation known as Jim Crow.

As he wrote in his 21-part series, "I Was a Negro in the South for 30 Days": "I quit being white, and free, and an American citizen when I climbed aboard that Jim Crow coach. . . . From then on, until I came up out of the South four weeks later, I was black, and in bondage — not quite slavery but not quite freedom, either.’’ -- Ray Springle

A Visit to a Jim Crow School, by Ray Sprigle -- Here on the outskirts of the pleasant, thriving little Georgia town of Bluffton in Clay county I go to school again. And what a school! This dilapidated, sagging old shack, leaning and lop-sided as its makeshift foundations give way, is the lordly white’s conception of a schoolhouse for Negroes.

This leaking old wreck of a shanty must be nearly half a century old. The warped old clapboards are falling off. Holes bigger than your hand give permanent cross-ventilation. There are no desks, no seats but rude benches. Two rough tables serve as desks. A few dog-eared school books are scattered on the tables. A "blackboard,"’ apparently home made, just a sheet of cardboard about two by three feet, is nailed to the bare studding.

Only redeeming feature of this thing called a school is the teacher. Tall and spare, gentle and soft spoken, earnest and intelligent, she reminds you of a typical New England school-marm with her sharp aquiline features - except for a deeper sun tan than one could ever get on a beach. 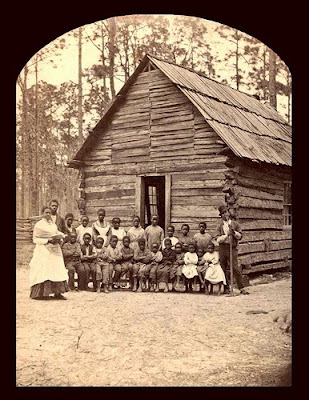 
For 27 years, she tells us, she has taught this little school. Three generations of little black American citizens have picked up the rudiments of an education under her kindly tutelage. She is actually proud of this school.

"The state furnishes us free school books now," she says. "When I started in 27 years ago the only text book we had was my Bible that I brought to school. Some of the children were able to buy text books as the years went on and the whole class used them."

There are 38 children in her school, divided into seven grades. She teaches them all. If all of her 38 scholars came to school at one time the little room would be crowded to suffocation. But now there is only a handful of little tots. All the bigger girls and boys are "excused." This is cotton chopping time and cotton is more important than learning. The bigger boys and girls are also "excused" at plowing and planting time and again in the fall when it’s time to pick the precious cotton. The school term is eight months, she says. But only the little tots ever see eight months of schooling.


Miss Minnie Dora Lee draws a salary of $112 a month. When she started and for many years afterward she got $20 a month. It has taken the full 27 years of her service to climb to that magnificent figure of $112.

Miss Minnie Dora Lee’s school is typical of Negro schools in Georgia and the deep South. We could have found many far worse and did. Some few are better. What sets her school ahead of most of the other one-room shanties in the South where little black children get their three R’s is Miss Minnie Dora Lee herself. In her 27 years as a school teacher, Miss Lee has learned, too. Hundreds of southern Negro schools have teachers who never went beyond the sixth or seventh grades and are wholly unfitted for teaching. I encountered more than one instance where the leading white cotton planter of the district appointed the teacher of the Negro school. Usually on the basis that her father raised more cotton "than any other nigger I’ve got on the place."

Catchword of your lordly, lily-white representative of white supremacy to justify all the phases of segregation with its inevitable train of discrimination, oppression, brutality and petty chicanery is the term "separate but equal."


So far as the education of little black American citizens is concerned, that "equal" in the South’s pet catch phrase is a brazen, cynical lie and every white man knows it.

No Negro school in all the South even begins to compare in any way with its companion white school. True enough, I didn’t check them all. But I did see scores of them. And I asked literally hundreds of Negroes to help me find at least one Negro school equal to a white one in the same area. Not only did none of them know of such an instance but even the most radical opponents of segregation didn’t even hope for, expect or ask for such a miracle. Any of them would be glad to settle for just ordinarily decent schools for their children. 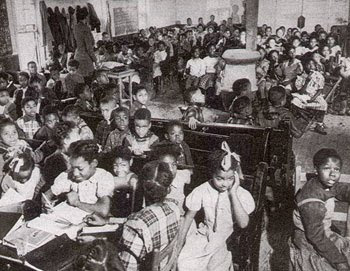 Right here in Clay county is a typical illustration of the bitter, tragic hypocrisy of that "separate but equal" lying catchword. Ride with me about a thousand yards down the highway past Minnie Dora Lee’s disintegrating old rookery. On the edge of Bluffton is the school for the white folks - the last word in small town educational plants.

A neat brick structure, with a wing on either side - at least six rooms. Grounds beautifully landscaped, a spreading playground crowded with all the latest equipment that money can buy. 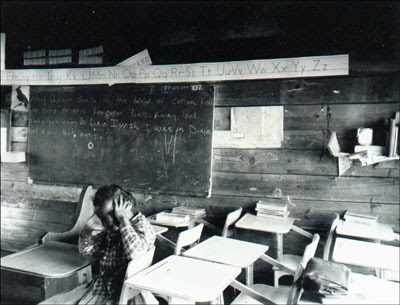