As reported by the San Francisco Gate, "Revisiting a scientific horror story in art / Chilling work on infamous Tuskegee study," by David Bonetti, a Chronicle Art Critic, on 27 July 2001 -- The clean, earnest young man asks, "And you never had one single moment of moral doubt about what you did?" over and over again. Between each question,

the bow-tied doctor, the exemplar of disinterested science, equivocates. You had to understand the circumstances. Those men loved the attention. It was for the good of their entire race. And then the question, like a hammer, comes again: "And you never had one single moment of moral doubt about what you did?"

What the doctor did, and what from our point of view he should have doubted every morning he got out of bed, was participate in the infamous Tuskegee syphilis experiment, a medical study about which one doctor wrote in 1970, "Nothing learned in this study will prevent, find or cure a single case of syphilis."

That the subjects, human guinea pigs, were all uneducated African American males who were told neither that they suffered from syphilis nor the nature of the experiment is shameful. That the experiment continued decades after the discovery that penicillin cured syphilis arguably puts the episode into the same category as the experiments on Holocaust victims carried out by Dr. Josef Mengele.

The Tuskegee experiment has been made timely again by "The Greater Good," an installation by local photographer Tony Hooker at the San Francisco African American Historical and Cultural Society at Fort Mason. Hooker became interested in the story in 1997, when he heard President Clinton apologize to the survivors for the inhumane treatment they had received from the U.S. Public Health Service.

Hooker learned that 412 men with syphilis participated in the program from 1932 to 1972. It is known that 28 of them died of syphilis during their participation. Thirteen studies on the subject were published by the government, and of the hundreds of medical personnel who were aware of what was going on in Macon County, Ala., only one questioned in writing the ethics of the experiment. 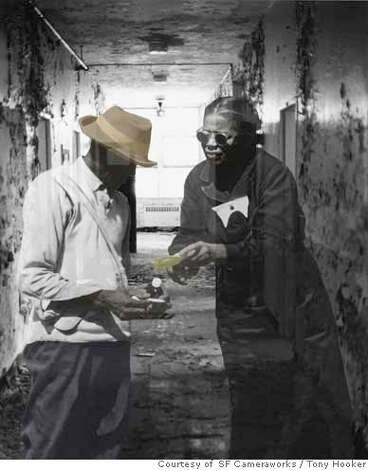 The justification was that if a few had to suffer for the greater good, it was worth their sacrifice.

Hooker has mixed his own photographs of the abandoned hospital with archival images of the doctors and their victims. In some cases he has layered the imagery, creating a ghostly effect. The montages are punctuated with Hooker's color photographs of the hospital's blistered walls.

Even more chilling are the videotapes. More dismaying than the one of the self-justifying doctor is one about Nurse Rivers, the African American nurse who participated all through the experiment as a sort of unwitting angel of death. A staged enactment of her imagined thoughts, based on her words, it reveals her profound state of denial.

Rivers recounts how her father was beaten by the Klan because he was more successful than they felt a black should be. As a nurse, she provided service to poor blacks as no one had ever done before. It was because of the trust she had built up that the Public Health Service recruited her for the Tuskegee experiment.

"The study wouldn't have happened if it weren't for me, for my caring," she says. She tells how she counseled men not to ask for penicillin when they first heard about its miraculous ability to heal "because they were getting the best treatment as it was."

After her retirement, she received an award in Washington, D.C., for her service. "I cried, but I cried for my 400 men too."

In her actual words, she said, "Oh, we had a good time. We had a good time, really and truly when I was working with those people. . . ," she says. "That was the joy of my life." (source: The San Francisco Gate)