Published on Tuesday, March 28, 2000 in the San Francisco Examiner, "H. Rap Brown: Idealism To Nihilistic Violence," by Earl Ofari Hutchinson  --  LOS ANGELES - I was disappointed, but not totally surprised, to hear that Jamil Abdullah Al-Amin — better known by his radical trademark name, H. Rap Brown — is the suspected shooter of two Atlanta sheriff's deputies, one dead and one seriously wounded.

(Al-Amin was arrested in Alabama's Lowndes County, west of Montgomery, on March 21 — several days after the shooting. Authorities said he was hiding in a shed, fired shots at U.S. marshals, then ran into a nearby wood. The FBI said federal and state agents circled him, then released dogs. Al-Amin was arrested, uninjured.)

Though it's dangerous and irresponsible to convict Brown of murder before all the facts are in, I still immediately thought of the evening in 1968 when I and a small knot of black journalists stood near the podium at the Los Angeles Sports Arena at a Black Panther fund-raiser.

Brown sat in the middle of the stage, garbed in a shiny black leather jacket with a black beret cocked at an angle and flanked by a small army of black leather-jacketed bodyguards and assorted hangers-on.

The crowd of several thousand roared with delight when a speaker announced that Brown had been "appointed" and had accepted the title of Minister of Justice of the Black Panther Party. This was the culmination of Brown's militant odyssey from student dissident, to civil rights worker, to chairman of the Student Non-Violent Coordinating Committee. By then black radicals regarded SNCC as a badly tainted relic of the civil rights movement that they deeply reviled.

His speech to the crowd was defiant, brash, laced with profanities and filled with threats to kill the police. He called for blacks to burn down America's cities.

As I soaked in his performance with a mixture of awe and fascination, I still wondered whether he really believed this fantasy vision of violent revolution that he was selling the crowd. His speech was designed to stir the red hot emotions of the audience.

The warning flares soared higher the more I heard him speak during the next few months. Brown, at times, seemed to take special delight in picking words that had maximum shock value on crowds. Yet what was needed were not bold threats to destroy the "white establishment," "the white man," "white devil," or "white oppressor," but concrete activities and programs for those genuinely committed to change.

Even the title of his book, "Die Nigger Die," was calculated for hyper shock effect. It was long on attacks on those moderate black leaders Brown branded "Negro sell-outs" and "Uncle Toms." Lengthy exhortations urged blacks to kill and die for the revolution. Yet it was devoid of any strategy or program for black political and economic empowerment.

By the mid-1970s, the Panther organization was in its final agonies. Leaders dropped like flies from police bullets or their own bullets; some degenerated into dope dealing, hustling and extortion. Others drifted away, afflicted with terminal disillusionment with the failed promises of the black movement. A few managed to swap their black jackets for Brooks Brothers suits and slide neatly into posts at universities, corporations and elected office.

The programs devised by early Panther organizers that had given so much hope to so many - the free clinics, free breakfast programs, legal aid, voter registration, business development and community organizing campaigns to combat police abuse - had become faded memories.

Brown was unrepentant. He remained trapped by his tough guy image. He seemed destined to be a permanent casualty of his violent rhetoric. He seemed utterly incapable of making the transition from radical mouthpiece to effective community organizer and leader. There were repeated brushes with the law that ended in a bungled robbery attempt (at a tavern patronized by African Americans) and a subsequent shootout with New York police. This landed him in prison for five years.

Brown reversed his downhill slide in 1976. He embraced Islam, re-christened himself with a Muslim name, did his mea culpas for his past and made his peace with America.

He took seriously his new role as spiritual leader and as a tireless worker for community betterment and against drugs and prostitution.

Yet an arrest for assault and possession of illegal weapons, though the charges were dropped, sent up another warning flare that he was still prone to act out the violent rhetoric of the 1960s that had caused him and so many other blacks such terrible personal grief and pain.

Brown may or may not be the triggerman in the murder of a black sheriff's deputy and the wounding of another, also black. And I sincerely pray that he isn't. 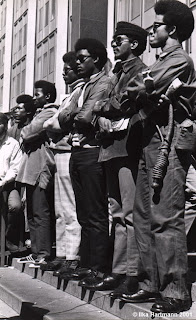 But his capture will almost certainly trigger another round of media reflection on how he, the Panthers and other 1960s black radicals drowned the genuine idealism and passion for social change of thousands of blacks in an ocean of selfishness, greed, opportunism and nihilistic violence.

Some of this will be true, but what it misses is the sacrifice and struggle of thousands of men and women against injustice. And for a time that included Brown.  [Copyright 2000 San Francisco Examiner]


H. Rap Brown Breaks down Politics of America on Like It Is w/ Gil Noble