When we think of the Middle Ages, images of knights and lords and ladies (who did not wear pointy hats!) come to mind. Theirs was a feudal social system, meaning that a sort of contractual arrangement existed between the lords and the peasants. The peasants toiled and farmed the land and did all the artisanal crafts. In return for a percentage of their product (or, later, cash payments), the lords promised protection to the peasants in times of strife. In addition, the peasants owed a fixed amount of days per month and per year to the lord to plant, tend, and harvest his crops, repair his fences, and generally keep his estate in order. Finally, the peasants at least nominally owed military duty if the lord should call them to arms to defend their homes or, less popularly, to go invade someone else’s lands. Completing this social system was the Church, which also demanded a tithe (or “tenth” of the peasant’s crops or profit) for spiritual protection. This system endured for a millennium, from the fall of the Roman Empire into the early modern period.

So what happened when the colonists arrived in America? First, and foremost, there were no kings or earls or lords nearby, even if they technically could still demand a percentage of the colonists’ profits. Even in places like the Middle Atlantic colonies of Maryland and Virginia, which were set up as giant feudal estates, the living was at first so marginal and the landowners typically absentee, enforcing feudal-style rents was largely either impossible or moot. But more importantly, many of the early colonial ventures, like the Jamestown settlement and the Plymouth Bay colony, were not extensions of lordly control, but rather joint stock companies or "adventurers" already outside feudal control. In addition, although the colonists brought their religion with them as a cornerstone of their voyage (whether Puritans escaping religious prosecution or devout Anglicans merely settling the land), they did not bring with them the whole Church hierarchy of bishops, archbishops, or, in the case of Catholics in New France, the Pope. Consequently, in the Americas where colonists spoke English, French, German, or Dutch, the institutions of the feudal system never took root.

And yet the medieval manor and colonial plantation shared a great deal in common. Some of America's most beloved sites, such as Monticello and Mount Vernon, functioned essentially as had their medieval manorial antecedents for hundred of years. In fact, the American plantations were actually more medieval than their contemporary farms back in Europe because of their isolation. One of the reasons for the rise of the manorial system in medieval Europe was wealthy landowners and merchants leaving the decaying cities of post-Roman Europe for the relative safety of their latifundia (the Latin term for "spacious estate"). Thus, one of the key features of medieval manors was their relative self-sufficiency. By the seventeenth century in Europe, however, most manors were tightly interwoven in a web of commerce and trade. But, the colonial plantation did not have this network and in a sense reverted to its medieval predecessor's style of self-sufficiency (although there was certainly plenty of trade and commerce going on).

What, then, became of the lords of the manor? They did not go away – the landowners and industrialists became the lords. Many agricultural landowners had hundreds if not thousands of acres and worked them with a combination of hired hands, indentured servants, and slaves. Even industrial iron plantations smelting iron replicated the medieval manor. For example, in the late 1750s, the Pennsylvania iron industry was booming, and (along with the colony’s policy of religious toleration) it attracted a wide range of investors and ironmasters, especially and not surprisingly, from Germany. William Henry Seigel formed a partnership with other Philadelphia and Lancaster Co. businessmen, bought numerous furnaces and expanded them into a county-wide iron empire. Seigel himself lived like a baron in a sumptuously furnished mansion in Manheim, PA. The only real difference is that by this time everything was operating on a cash economy, rather than the labor or in-kind payments typical of feudalism. Jefferson and Washington, too, were in fact very much like medieval lords. They owned the land. They owned the laborers (medieval serfdom, a sort of virtual slavery, was of course replaced by outright slavery in the New World). They were the men in control of most commerce and primary production. They were the men in charge of government. And they were the ones who wrote the laws. 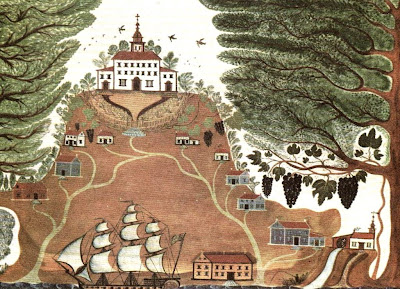 So when we think of Thomas Jefferson penning the Declaration of Independence, he was indeed charting out the course of a new nation, but he was also fulfilling the role his forbears had filled for centuries before him. It is no mistake that there is a strong parallel between the Magna Carta, the basic charter of liberties for England forced upon King John in 1215, and the Declaration of Independence as well as the Constitution and the Bill of Rights "forced" upon King George III in 1776-83.  (source: http://www.engr.psu.edu/mtah/essays/mannors_plantations.htm)