From the BBC, On This Day, February 21  --  1965: Black nationalist leader shot dead Controversial black leader Malcolm X, who once called for a "blacks-only" state in the US, has been assassinated. He was shot several times as he began a speech to 400 of his followers at the Audubon Ballroom just outside the district of Harlem in New York.

Malcolm X, who was 39, was taken to a nearby hospital but was pronounced dead shortly afterwards. 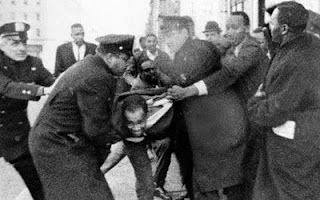 Two men believed to have carried out the shooting were cornered outside the ballroom by a crowd and badly beaten.

Malcolm knew he would be killed

It took 10 police officers several minutes to rescue them.

One of the arrested men, Thomas Hagan, 22, had a bullet wound to his leg and was taken to hospital.

It is believed the men are members of the black Muslim group, the Nation of Islam (NoI).

Malcolm X had long been tipped to take over from the NoI's ageing leader, Elijah Muhammad.

He gave up his "slave" family name of Little when he joined the black Muslim group while serving a jail term.

But he broke away from the NoI acrimoniously two years ago to set up his own organisation which he said was for "Negro intellectuals who favoured racial separation but could not accept the Muslim religion".

However, after a recent trip to Mecca he appeared to be taking a more conciliatory approach to white people.

Sanford Garelick, assistant chief of New York police said Malcolm X's death could most probably be put down to rivalry between the two groups.

"This is the result, it would seem, of a long-standing feud," he said.

Only last week Malcolm X and his family survived the firebombing of their home in the Queen's district of New York.

Malcolm X's lawyer, Percy Sutton, said he was aware his life was in danger.

"Malcolm knew he would be killed," Mr Sutton said.

Police said they were investigating reports that some of Malcolm X's followers were planning a revenge attack.

In Context  -- In March 1966 three men, two of whom admitted being members of the Nation of Islam, were found guilty of Malcolm X's murder.

They were sentenced to life imprisonment.

In May 2000 Nation of Islam leader Louis Farrakhan appeared on television with one of Malcolm X's daughters.

He had long been blamed by Malcolm X's family and supporters for inciting his murder.

Mr Farrakhan expressed regret that "any word that I have said caused the loss of life of a human being".

However, he denied he had had any role in the actual killing.  (source: BBC News)
***

Thomas Hagan, who admitted to taking part in the 1965 assassination of Malcolm X, was paroled Tuesday by New York State Tuesday.

Hagan was one of three men who according to investigators took part in the shooting of one of the most controversial and larger-than-life heroes of the civil rights and black nationalist movements of the 1950s and 1960s.

At a February 1965 speech at Harlem's Audubon Ballroom in New York, with his wife and young children watching in the audience, Malcolm X was shot down after two of the men in the plot caused a disturbance in the audience. Investigators determined the disturbance was a diversion to distract those who provided Malcolm X with security. Hagan was wounded in the aftermath of the shooting.

About Hagan, the Associated Press reports: He had spent two days a week at a Manhattan prison under a work-release program.  The 69-year-old Hagan was the last man still serving time in the 1965 killing. He and two others were convicted of murder.  Hagan says he was one of three gunmen who shot Malcolm X at Harlem's Audubon Ballroom. But he says the two men who were convicted with him were not involved. They maintained their innocence and were paroled in the 1980s.