The Sugar Barons of the West Indies 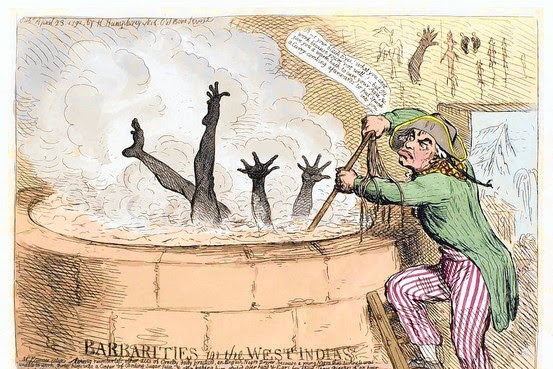 'Barbarities of the West Indias' by Gillray.  James Gillray based his 1791 anti-slavery cartoon on the report of an overseer who had thrown a slave into a boiling vat of sugar. The overseer was punished only by dismissal and a fine equal to the price of the dead man. National Portrait Gallery, London

From the Literary Review, by Leslie Mitchell, "'The Dunghill of the Universe' a review of 'The Sugar Barons: Family, Corruption, Empire and War' by Matthew Parker (Hutchinson 446pp £25)  --  In the seventeenth and eighteenth centuries, no one had a good word to say about the West Indies. The government of Jamaica was 'a Sweating chaos'. The inhabitants of the islands represented 'the Dunghill of the Universe, the Refuse of the whole Creation'. They lived on plantations that were 'the Receptacle of Vagabonds, the Sanctuary of Bankrupts, the Close-Stool for the Purges of our Prisons ... as Hot as Hell and as wicked as the Devil'. West Indians, with the one desire 'to patch up their Decay'd Fortune', thought of 'nothing but Money, and value not how they get it'. A reading of Matthew Parker's able and well-researched book might lead to the conclusion that these were understatements.

At the heart of it all was a genuine eldorado, expressed, not in terms of precious metals as in the Spanish Americas, but in sugar, slaves and molasses. These trades collectively were 'white gold'. In 1670, 200 acres of cane could produce a sugar harvest worth seven thousand pounds, enough to support a duke in England. A century later, the per capita income at home was twenty times less than that among whites living in Jamaica. Planters left estates that numbered them among the richest of George III's subjects. The phrase 'as wealthy as a West Indian' entered the language.

If a man survived in these societies 'beyond the line', therefore, there was a fortune to be made, but survival did not come easily. Disease was everywhere, and carried off victims from all classes and all races. Twenty per cent of Kingston's population died every year in the 1740s. One third of whites died within three years of arriving from Britain. The islands did not invite a man to linger. In the American colonies, families were committed to long-term settlement, but for most West Indians the object of the game was to make money quickly and then return 'home'. North Americans might challenge government from London, but West Indians never lost sight of the fact that they were in exile from England.

Death takes centre-stage in this book, and it arrived from every conceivable direction. Nature of course was malevolent. Swamps and rainforests harboured a myriad of illnesses, and the mosquito was always hungry. Then there were pirates like Henry Morgan and the flamboyant Bartholomew Ryder, who led his men while covered in gold and silver lace, but who nursed 'a churlish constitution' and was 'apt, when in drink, to utter some Portuguese or Moorish words'. Anyone fortunate enough to survive these perils still had a good chance of being slaughtered by French, Spanish or Dutch raiders, or in insurrections of the islands' native populations, the Caribs. Beside all this, the hurricane, the earthquake and the tsunami were simply things to be taken in one's stride.

Worst of all for whites in the West Indies was the feeling of being always under siege. Remarkably quickly, they found themselves heavily outnumbered by black slaves. Jamaica, in 1730, had around 8,000 white residents and nearly 75,000 thousand slaves. Fears about a slave uprising were the most terrifying fears of all. Any hint of insubordination was met with the greatest brutality. The planters hated Quaker and Methodist preachers, who argued that black and white were equal in the sight of God. Yet there could be no other social structure, for there was nothing democratic about sugar production. The canes had to be grown on large estates, which also had the buildings and machinery to process the crop. All of this involved capital outlays that were beyond the reach of small farmers. As sugar ousted all other crops, so ownership became concentrated in fewer and fewer hands. The contrast with developments in North America could hardly be more clear. The production of sugar required 'masters ... of great abilities and parts'. Lesser men sold up and left.

As the white population steadily diminished, the slave population rose by leaps and bounds. Only unfree labour could be made to undertake the back-breaking work in the cane fields. Earlier experiments with white, indentured labour had been uniformly unsuccessful. Such a system produced enormous profits, but it could never guarantee long-term security. Instead, a handful of white oligarchs sat it out, intermarried, became fabulously wealthy, and took their chances. 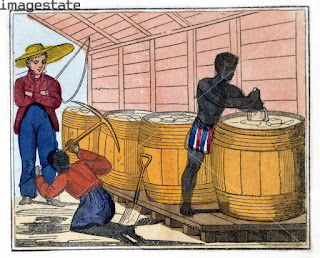 It is largely through the lives of these people that Parker tells his tale. Surnames like Drax, Codrington, Lascelles and Beckford appear from relative obscurity and climb steadily upwards. In the West Indies, they were effectively a law unto themselves. The Beckfords could literally get away with murder. Then, sensibly repatriating profit to England, later generations entered the English Parliament and acquired titles. In the mid-eighteenth century, what was called the West Indian lobby controlled up to forty MPs. No sensible government ignored its wishes. The trade with Jamaica alone was, after all, worth more than traffic with the whole of North America. In 1783, it made sense to give up a continent in order to hold on to an island.

Empires have a habit of coming home. Very quickly, sugar crystallised into more concrete forms. Whole cities, like Liverpool, Bristol and Glasgow, prospered as the fleets returned from the west. Liberals at Holland House wined, dined and talked high principle on the profits of slavery. The Beckford palace at Fonthill was a glorious, sugar confection. When the first house was destroyed, its owner philosophically reflected that he had 'fifty thousand pounds in a drawer' and 'would build it up again'. Such ostentation, when construed as vulgarity, earned the West Indians the nickname of 'pepperpots'. Most poignantly, the Fellows of All Souls in Oxford studied in their Codrington Library, built with the proceeds of sugar and slavery. As for Christopher Codrington himself, 'no spark had walk'd up the High St bolder'.

As Matthew Parker's engaging book demonstrates, by 1750 the sugar trade, like oil and gas today, had infiltrated so many aspects of national life that it had become a power in the land in its own right. Politicians courted it, and men died in its service. It had become a national necessity. No wonder that the abolition of slavery was a long time coming.  (source: Literary Review)