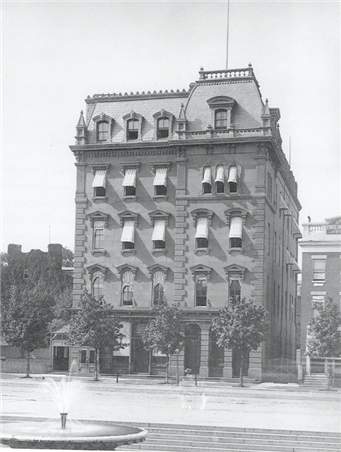 Three million dollars ($53,942,565.24 in 2010 dollars) belonging to 61,000 African Americans. That's how much accumulated wealth vanished when the Freedman's Savings and Trust Company failed in 1874. Earlier that year, Frederick Douglass had become the bank's President just after it moved its headquarters to a prominent location on the corner Lafayette Square, where the Treasury Annex now stands. Douglass was unaware of the rampant corruption within the bank and, once he discovered how weak the institution was, he attempted to stabilize it by investing thousands of dollars of his own funds.
The Freedman's Bank building was an imposing structure that cost $260,000 to build. Describing his reaction to seeing the building for the first time, Frederick Douglass wrote, "The whole thing was beautiful. I had read of this bank when I lived in Rochester, and had indeed been solicited to become one of its trustees, and had reluctantly consented to do so: but when I came to Washington and saw its magnificent brown stone front, its towering height, its perfect appointments, and the fine display it made in the transaction of its business, I felt like the Queen of Sheba when she saw the riches of Solomon, that 'half had not been told me'."

When it failed, the Freedman's Savings Bank had 37 branches operating in 17 states and the District of Columbia. In the District alone over 3,000 depositors—both individuals and cultural institutions — lost their savings. The bank building was purchased by the federal government in 1882 and demolished in 1899.
What does survive are the records of twenty-nine branches of the Freedman's Savings Bank, including those of the Washington DC office, which are searchable at the National Archives. These records contain a wealth of information about the bank's customers—many of whom lived the transition from slavery to freedom—including their names, employers, physical descriptions, occupations or professions, and the names of their children and/or siblings. (source: White House History)

The Freedman's Bank Today, The site of the Freedman’s Bank is now the location of the Treasury Annex.
Posted by Ron at 6:36 AM