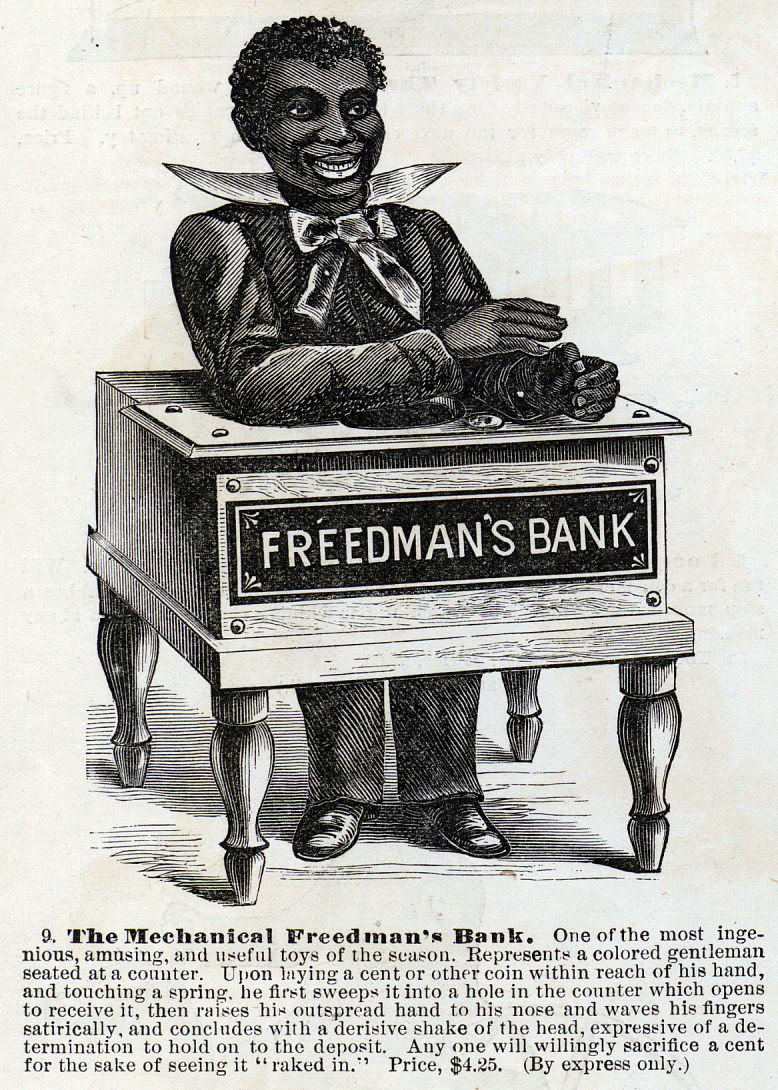 Other than having the finest most complete collection of the different mechanical banks, one of the great drives or aims, if not the greatest, of most collectors of the mechanicals is to own a Freedman’s Bank. The possession of this bank not only puts one in a very select small group, but it also establishes a collection on its way to being among the top ten. No other single mechanical bank can quite touch the achievement of the acquisition of a Freedman’s. Right on its heels, of course, is the Clown, Harlequin & Columbine, however, the Freedman’s Bank has maintained its position as the No. 1 mechanical for years and it’s highly improbable that it will ever be anything but No. 1.

The rare once in a lifetime occasion of a Freedman’s being added to an individual’s collection is a real noteworthy event and it is with great interest we inform our readers that W. W. Tudor has recently acquired a fine example of this outstanding bank. It is now the fifth one known to exist in a privately owned collection of mechanical banks. The bank had been under wraps for years and Mr. Tudor is certainly to be congratulated on his acquisition of this greatest of mechanicals.

A brief review of the other four Freedman’s that exist in private collections is in order at this point. First was the one found by the late William F. Ferguson in a second hand shop in Connecticut. It was minus all clothing and the head and frame of the figure were also missing. This bank has been restored in fairly recent years and is now in the Perelman collection. The second Freedman’s was found by the late Andrew Emerine. It turned up in Mexico City with some needed restoration and minus the original clothing. This was remedied by Mr. Emerine and the bank is now in the Mosler collection. The third Freedman’s Bank turned up in Pottstown and was acquired by John D. Meyer, one of the pioneer collectors. It is in nice condition but the table has no legs and there are no legs on the figure. The fourth Freedman’s was obtained by Mark Haber from its original owner, Dudley L. Vaill of Winston, Conn. The bank had been carefully kept by Mr. Vaill in its fine condition over the years and it is the only known completely original specimen-even to having the paper label of the store where it was originally purchased. The bank was given to Mr. Vaill by an uncle as a Christmas present in either 1879 or 1880. It remained in his possession until May 1944, at which time Mr. Haber obtained the bank from him. This excellent example was added to the writer’s collection some 20 odd years ago. 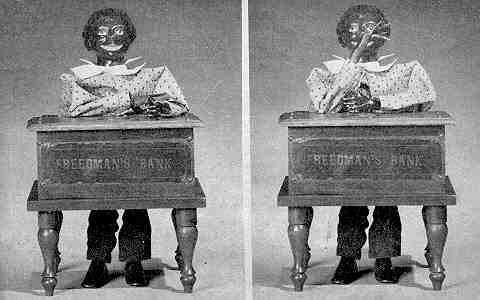 Now we come to Mr. Tudor’s Freedman’s Bank, the fifth one to be in a collection of mechanical banks. It is pictured in Figure 1 before and after the operation. Figure 2 shows the bank during the action. The action, as has been described before (HOBBIES, October, 1951), is really something and it is the most intricate of all the mechanicals. This Freedman’s like the one owned by Mr. Mosler, has a hair like wig on the head of the figure. Please see HOBBIES, October 1951 and October 1965, for photos of the writer’s bank without the wig. Jerome Secor, the manufacturer of the bank, from all evidence obtainable made it first without a wig and then some with wigs. It is also interesting to note that the paper name section on the front of the bank shown is a larger size than the one on the writer’s bank, both are unquestionably original.

The clothes of the figure on the bank pictured are not original, although they were made a number of years ago. Some other minor restoration was necessary, as well as adjustment of the involved clockwork mechanism. The bank is now in perfect original working order going through all the proper operations and movements. It’s a fine example of the greatest of the mechanicals.

In possessing the Freedman’s Mr. Tudor is joining two unusual groups. First, as previously mentioned, are those owning one. Then come those who have a Freedman’s and a Harlequin in their respective collections. The writer has always been pleased in being first to accomplish this-then a few years ago Mr. Perelman made it No. 2, and now Mr. Tudor is No. 3. A step forward for Mr. Tudor – a giant step forward for his collection. (source: Mechanical Banks)