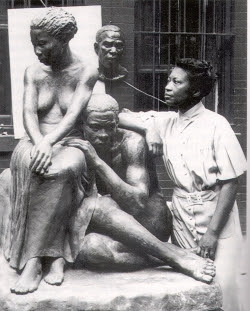 
A gifted sculptor, Florida-born Augusta Savage fought poverty, racism and sexism to become a prominent figure in the Harlem Renaissance, the period of African-American cultural outpouring in New York City during the 1920s and '30s. Her extraordinary talent opened many doors that led to her becoming one of the most influential black teachers of her time and a strong voice for civil rights for blacks.

Born Augusta Christine Fells in Green Cove Springs, Florida in 1892, she was the seventh of 14 children born to Edward and Cornelia Fells. As a child, Fells exhibited a talent and a passion for sculpting small objects using red clay she found in her neighborhood. The habit often got her into trouble with her father, a part-time minister, who regarded his child's handiwork as "graven images" outlawed by the Bible's 10 Commandments.

When she turned 15, her family moved to West Palm Beach. At her new school, Augusta's talent quickly caught the attention of her teachers. In her senior year, the school's principal began paying her a dollar a day to teach clay-modeling lessons.

In 1907, at age 16 Augusta married her first husband, John T. Moore. The couple had one child, a daughter named Irene Connie Moore. When Moore died a few years later, Augusta married again in 1915. The marriage, to James Savage, a carpenter and laborer, soon ended in divorce, but Augusta chose to keep his last name.

Despite her personal setbacks, Savage managed to work diligently on her art. A series of sculptures of religious objects, including the Virgin Mary, changed her father's opinion of her art. After winning a special prize of $25 for her sculptures at a county fair, Savage began selling her pieces. She raised enough money to travel to Jacksonville, where she hoped to be commissioned by wealthy black residents to create busts of them. The venture failed commercially, but set Savage's resolve to become a serious artist.

After a year at the Florida Agricultural and Mechanical College for Negroes (now Florida A&M University) in Tallahassee, Savage got recommended by the superintendent of the county fair where she'd won her first prize to study art in New York. She was accepted at prestigious Cooper Union, which offered tuition-free education to select students. Savage was so well-received at Cooper that she was given a scholarship to help support herself.

She soon garnered her first New York commissions–including a bust of W.E.B. DuBois for the New York Public Library in Harlem and another bust of the famous black leader, Marcus Garvey, head of the Universal Negro Improvement Association. On the latter project, she met Robert L. Poston, one of Garvey's associates. They were married in 1923. Tragically, a year later Poston died aboard ship on a return voyage of a UNIA mission to Liberia. Savage, then 32, never remarried.

After finishing her studies at Cooper in 1924, Savage applied for a special summer scholarship to study in France. When the scholarship committee learned that she was black, they denied her application. Stung, Savage responded by mailing letters to newspapers charging racism. Even though the event became a city-wide scandal, the committee stood by the decision.

Savage's life became extremely difficult when tragedy struck her family in Florida. After her father became paralyzed and a hurricane destroyed her parents' house, she moved her family into her small apartment in New York. In 1925, Savage was offered another chance to study overseas, a scholarship that would pay for her education in Italy–but not the travel expenses. Savage was obliged to use all the money she made working in a steam laundry for family matters and had to forego the offer.

Augusta Savage in her studio with “The Harp”, based on ‘Lift Every Voice and Sing’ by James Weldon Johnson (photo by Morgan & Marvin Smith, 1936)


But in the late 1920s, Savage's luck changed when a photo of one of her latest works–a sculpture of a small black youth–made the cover of Opportunitymagazine. Entitled Gamin (French for "street urchin"),the piece was a likeness of her nephew, Ellis Ford. The magazine caught the attention of the Julius Rosenwald Fund, which granted Savage a scholarship of $1,800 to study in Paris. In 1930, Savage finally realized her dream of training within the elite circles of European art.

When she returned to the U.S. in 1931, Savage encountered the Great Depression with all its miseries. Savage struggled to find work as a sculptor, but did turn out several busts of prominent black leaders, including fellow Floridian James Weldon Johnson, Frederick Douglas and W.C. Handy. But most of her work during the decade focused on education instead of art.

"Lift every voice and sing" by Augusta Savage: New York World's Fair. Although she was a leading artist of the Harlem Renaissance, low sales and a lack of financial resources dogged Savage’s career. Many of her works were done in plaster, and she was unable to raise the money to have them cast in more permanent materials, so not all have survived. Most notably, the 16-foot-tall 1937 sculpture The Harp, also known as Lift Every Voice and Sing, commissioned for and a popular display at the 1939 New York World’s Fair, was destroyed when the fair was over because she didn’t have the funds to have it removed from the fairgrounds and cast in a more permanent material. When the Schomburg Center had a retrospective of her work in 1988, only 19 pieces were located.

After founding her own teaching studio–the Savage Studio of Arts and Crafts–Savage became active in enrolling black artists in the newly founded Works Progress Administration's Federal Art Project. She soon was tapped to direct the program, becoming a leading figure in New York's community of black artists.

In 1937, Savage won her last significant commission, a sculpture for the 1939 World's Fair. Using plaster, she created a sculpture entitled The Harp depicting numerous black figures singing, all incorporated into a surreal, 16-ft-tall harp. The work was inspired by a song that had become widely recognized as the "black national anthem"–"Lift Ev'ry Voice and Sing," published by James Weldon Johnson and his brother John Rosemond Johnson in 1905. Since no funds were available to cast the sculpture in metal, it was destroyed when the fair closed.

After opening two galleries and seeing them both fail commercially, Savage left the art world for good in 1940, moving to a farm in Saugerties, New York, near Woodstock in the Catskill Mountains. For 20 years, Savage lived in relative obscurity, supporting herself by teaching art and working on a mushroom farm. In 1960, she moved in with her daughter Irene in New York City, dying in 1962 from cancer. (source: Florida Arts)

GUEST: My mother had a friend, Miss Foster, and Miss Foster was 90 and going into a nursing home, and mother said, "She would like you to come over and pick out something from the apartment." And I saw this young boy, and I said, "He's darling; may I have him?" And Miss Foster said, "I'd love you to have him."

APPRAISER: This is a sculpture by an artist named Augusta Savage. And she was a black artist who worked in New York in the 1920s and '30s. And this is her most famous work. It's called Gamin. And it's actually inscribed on the front, "Gamin."

APPRAISER: And the piece is signed on the back with her name, "Savage." And what's interesting about this piece is that while it looks like it's bronze, it's actually made out of plaster, and it's painted to look like bronze. And if you look on the bottom here, you can see the white plaster. She didn't have the money to cast them in bronze. It was a very expensive process. This is a wonderful piece, it really capture the spirit of the young boy.

APPRAISER: It comes in this size, and there's another version that's slightly larger.

GUEST: Oh, did she make many of them?

APPRAISER: No, not really, because there just wasn't a demand for them, and I think even if she made a lot of them, because they're plaster, they're very fragile. In fact, yours knocked over and cracked.

January 4, 2009 — The University of Virginia Art Museum is featuring new acquisitions from its Print and African American collections.Featured in the installation is the recently acquired "Gamin" (1929) by the renowned Harlem Renaissance artist Augusta Savage. Rendered in painted plaster, the highly expressive portrait bust of Savage's nephew is an iconic work in mid-century American art.

GUEST: With a crack?

APPRAISER: With a crack, yes. Isn't that great?

GUEST: That's wonderful. I cannot believe that. I...

APPRAISER: It can even bring more.

GUEST: Thank you very much.

Click here to view a film clip of Ms. Augusta Savage
Posted by Ron at 6:46 PM