Journey to Louisville (pronounced Lewis-ville), Georgia and you are in for a history lesson. Site of the Georgia state capital during the Yazoo Land Fraud the city was near the center of the antebellum cotton industry. Completely rebuilt in the center of downtown Louisville is a market house where people would sell just about anything, including slaves. It is the only remaining slave-trading site in the state of Georgia, and was the largest slave market in the state for many years. 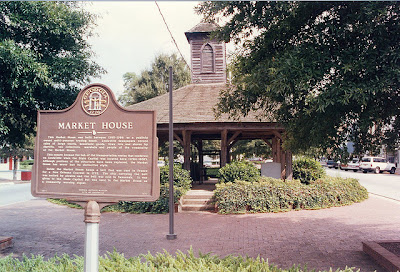 Originally built between 1795 and 1798, the market used by sheriffs and other officials as well as local folk to sell land and goods. But the dark side of this market is the African-American slave trade that fueled the local economy. When importation of slaves became illegal in 1808 the market in Savannah closed. Smugglers had to move their goods inland for sale, and the market at Louisville was very active in the illegal trade.

The market survived General Sherman's March to the Sea. A bell inside the market was cast for a New Orleans Convent, but never made it there. A pirate ship took it as booty and through an unknown series of events the bell ended up at Louisville. (source: Roadside Georgia)

The commission appointed to choose the location of a new permanent capital city directed that it be built within 20 miles of the trading post called "Galphin’s Old Town" (or "Galphinton"), which was located in present day Jefferson County. The site finally selected was by a slave market located at the intersection of three roads leading to Augusta, Savannah, and Georgetown respectively. The slave market, built in 1758, is still standing. The Legislature directed that the name of the new capital be Louisville in honor of King Louis XVI of France as an expression of thanks for French aid during the Revolutionary War. 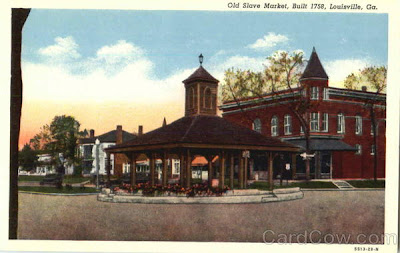 Louisville was Georgia’s first planned capital, and the city was to contain the state’s first capitol building built expressly for that purpose. The new state house was completed in 1796. Although there are no known paintings or drawings of this building, it is known that it was a two-story structure of 18th century Georgian architecture, and was made of red brick. Even before moving to the new capital, the Legislature designated Louisville the "permanent seat" of Georgia government. But by the early 1800s, further western expansion caused the Legislature to convene in yet another new "permanent" state capital. (source: Georgia Government State Archives)
Posted by Ron at 8:55 PM