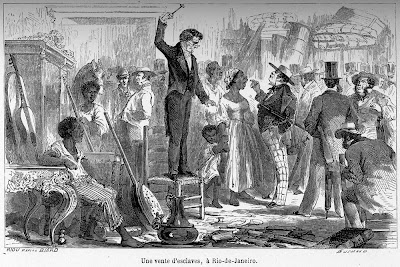 Standing on a chair, the auctioneer dominates the scene while an enslaved woman with a child clinging to her arm is examined by a prospective buyer. Other Afro-Brazilians (slaves?) are also shown; various material goods, including household furniture and musical instruments, are apparently being sold at the same auction (see also Biard05). Biard, a French painter, lived in Brazil for two years, 1859-1861. His published account contains a number of images of slave life... 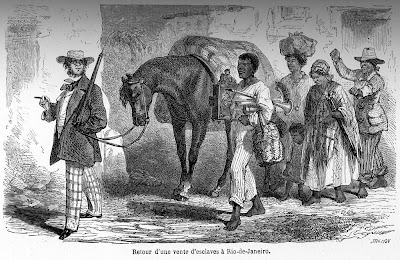 The slave owner, leading his horse while smoking a cigar and carrying an umbrella, heads a group of four adults and one child. One of the men carries household goods, including a clock and a musical instrument while the two women, one holding onto a child, are behind; bringing up the rear is an enslaved (?) man who appears to be guarding the newly-bought slaves. The material goods shown suggest that the auction was not only for the purchase of slaves but household items as well (see also Biard04). Biard, a French painter, lived in Brazil for two years, 1859-1861.
Posted by Ron at 7:21 AM