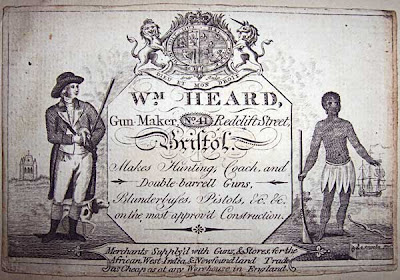 The ad continues: "Merchants supplied with guns and stores for the African, West Indies, and Newfoundland Trade as cheap as at any Warehouse in England." 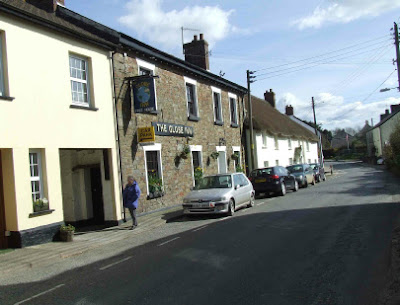 This appears on a family tree site.

"Opposite the Globe we found Forge Cottage. The circular plaque can be seen to the left of the door. In the 1851 census there were two Smithies in Beaford. One was further along the road past the school where the garage is today, this was where William HEARD [6051] worked with two of his sons. Forge Cottage fits the position for Henry HAMMETT’s [10976] smithy. Henry’s first wife was William WESTCOTT’s daughter Jane."

"The above photograph shows the old Post Office on the corner of Green Lane. It was kept in 1906 by Mrs Thomas WESTCOTT (Kelly’s Directory), The Gunsmith’s Arms is adjoining the Post Office. The Gunsmith’s Arms has been kept by generations of HEARDs from Robert [6067] baptized in the parish church in 1780. He was a gunsmith. Robert had another brother, George who was also a gunsmith. They had two more brothers who were blacksmiths and yet another who was a glazier." (source: http://www.mcmullin.plus.com/beaford.html)
Posted by Ron at 4:12 AM