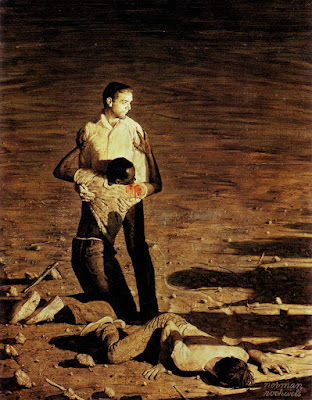 Norman Rockwell: Southern Justice (a Mississippi Murder)
Norman Rockwell: a life By Laura P. Claridge states: "...Although Hulburt admired the preliminary oil sketch so much that he suggested publishing it, Rockwell insisted that the art director let him produce a finished painting as well. By the end of April, after Hulburt spent a few weeks deciding between the two renditions, he phoned Rockwell with the news that everyone at Look preferred the sketch, "quite a change," the illustrator notes in his calendar. For the first time in his career, both he and an art director agreed that the earlier oil sketch with its loose brushwork, delivered more impact than the finished oil, and so for the only time in Rockwell's career, the preliminary study was published while its completed counterpart was not. 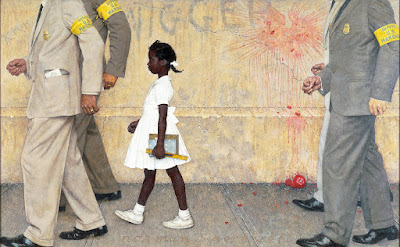 Norman Rockwell: The Problem We All Live With
Southern Justice, a dramatic tableau of the Mississippi civil rights workers who were shot during the voting registration drive, appeared in Look on June 29, 1965. As he had with "The Problem We All Live With," Rockwell used the dramatic contrast of light and dark to further the theme of racial strife and potential harmony. The white shirt of the white man holding a dying black man contrasts not only with the slain worker's skin but with the bright blood splashed on the ground and covering the third participant. Painted in colors reminiscent of the old two-tone process --white, red and brown--the painting powerfully conveys the beauty of the ideals behind the ugly cost of their achievement. Rockwell "tried making [the] Civil Rights men heroic, influenced by Michel Angelo "as he had written in his calendar several months earlier." 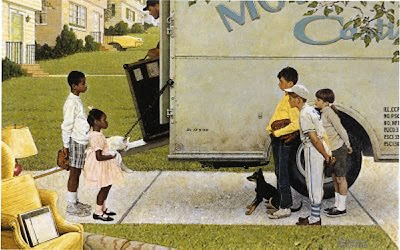 Norman Rockwell: New Kids in the Neighborhood
Reactions among Rockwell's admirers has been mixed on the painting from its publication. Some believe the painting to be strained because, after all, this wasn't Rockwell's kind of thing, others find it masterful, a case of Rockwell finally applying his much-vaunted technique to a historically weighty subject. Even the working photos emphasize the new graphic realism for most settings, Rockwell preferred to use the natural light from his studio's large north window. But in both Southern Justice and the later New Kids in the Neighborhood, another racially themed painting, he now added floodlights to accentuate the contrast of light and dark, the artificial light heightening the sense of drams. (source: Google Books)
Posted by Ron at 7:56 AM

Email ThisBlogThis!Share to TwitterShare to FacebookShare to Pinterest
Labels: artists