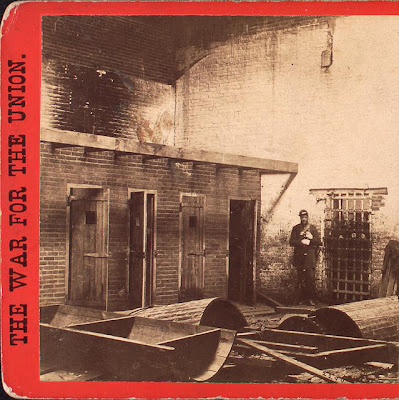 Interior of Slave Pen
The interior of a slave pen in Alexandria, Virginia, shows the cells where people were held prior to being sold.
From its beginning -- ever since the nation's capital had been moved from Philadelphia in 1800 -- slavery was legal in Washington, D.C. With its proximity to both the upper and lower South, it would become a major center for the domestic slave trade, passing thousands of slaves through to the plantations of the deep South. Although Congress had the power to outlaw slavery in the District of Columbia, it did not do so until 1862 -- the power of the proslavery forces was too strong. Slavery proponents knew that if they kept the institution visible in the nation's capital, it would act as a vivid symbol of their grasp on the nation. They were right: the presence of slavery was impossible to ignore. Visitors expressed disgust at the sight of slave coffles and holding pens in the capital of the "freest" nation in the world.
(source: PBS)
Posted by Ron at 7:57 AM