A Description of a Washington, D.C., Slave Pen 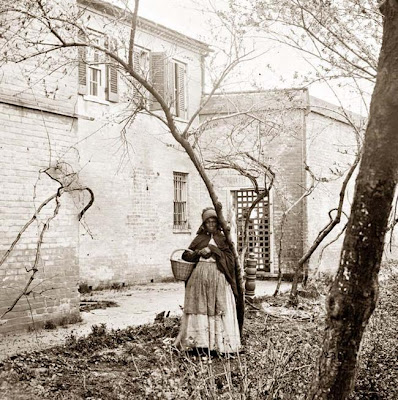 E.S. Abdy, Journal of a Residence and Tour...One day I went to see the "slaves' pen"--a wretched hovel, "right against" the Capitol, from which it is distant about half a mile, with no house intervening. The outside alone is accessible to the eye of a visitor; what passes within being reserved for the exclusive observation of its owner, (a man of the name of Robey,) and his unfortunate victims. It is surrounded by a wooden paling fourteen or fifteen feet in height, with the posts outside to prevent escape and separated from the building by a space too narrow to admit of a free circulation of air. At a small window above, which was unglazed and exposed alike to the heat of summer and the cold of winter, so trying to the constitution, two or three sable faces appeared, looking out wistfully to while away the time and catch a refreshing breeze; the weather being extremely hot. In this wretched hovel, all colors, except white--the only guilty one--both sexes, and all ages, are confined, exposed indiscriminately to all the contamination which may be expected in such society and under such seclusion. The inmates of the gaol, of this class I mean, are even worse treated; some of them, if my informants are to be believed, having been actually frozen to death, during the inclement winters which often prevail in the country. While I was in the city, Robey had got possession of a woman, whose term of slavery was limited to six years. It was expected that she would be sold before the expiration of that period, and sent away to a distance, where the assertion of her claim would subject her to ill-usage. Cases of this kind are very common.
Journal of a Residence and Tour in the United States of North America, from April, 1833, to October, 1834, Volume 2, London, 1835

(source: PBS Africans in America)
Posted by Ron at 7:46 AM