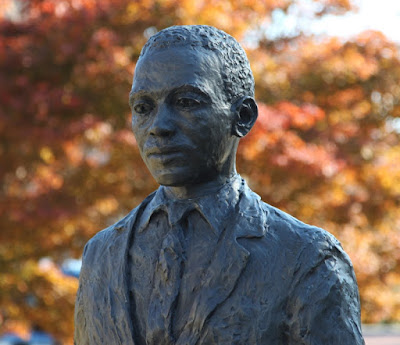 In 1966 the BBC reported: "1966: Black civil rights activist shot." James Meredith, the first black man to brave the colour bar at the University of Mississippi, has been shot and wounded after entering Mississippi on a civil rights march. 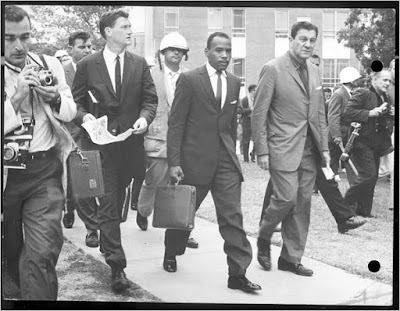 James Meredith, center, is escorted by federal marshals as he enters the University of Mississippi, in Oxford, in September 1962. Mr. Meredith was the first black student to attend Ole Miss, and his enrollment sparked riots by white students and residents that led to two deaths. The campus was the site of the first presidential debate between Democratic Candidate, Senator Barak Obama and Republican Candidate Senator John McCain in 2008.

Police have arrested a 41-year-old white man named Aubrey James Norvell from Memphis on suspicion of carrying out the shooting. 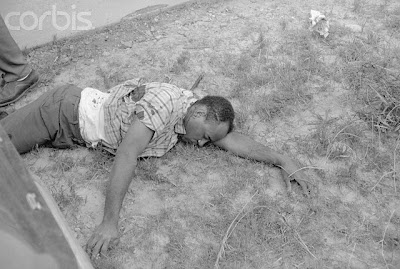 The 32-year-old civil rights activist began his solo 220-mile March against Fear yesterday in Memphis and was heading for Jackson to show his fellow black citizens how to stand up to white authority and also to encourage them to register to vote. 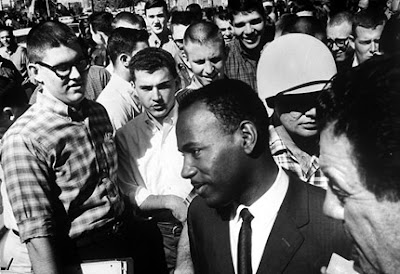 James Meredith, center, was the first African American student accepted by the University of Mississippi. His attendance provoked riots. Here he is escorted to class by U.S. marshals and troops. Oct. 2, 1962.

At Hernando, Mississippi - 30 miles from his starting point - he saw an armed man aim at him and dived to the ground, but he was shot three times. Bleeding from the head, shoulder and leg he shouted: "Oh my God."

FBI agents and reporters who were following the march witnessed the ambush.

An ambulance took him to hospital where doctors later said his wounds were not serious. 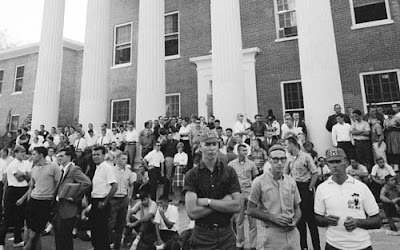 In 1961 Mr Meredith became an icon for the civil rights movement when he applied to the University of Mississippi and was rejected on racial grounds.

The NAACP (National Association for the Advancement of Colored People) then brought a suit in a federal court which granted him the right to enroll. 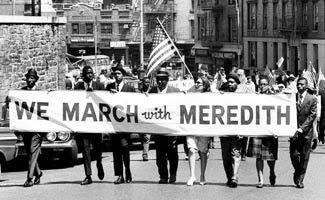 When he arrived to do so he was turned away by the university authorities and by the governor of Mississippi.

A court injunction for contempt removed this barrier but a white mob stopped him entering the university. 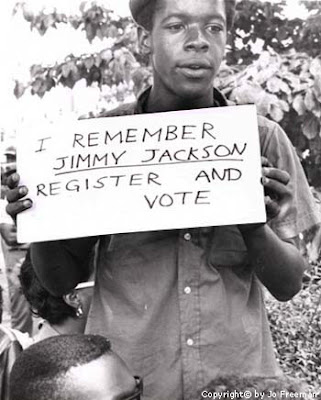 After a riot in which two people were killed and 375 were wounded, President Kennedy sent 3,000 troops to restore order and allow Mr Meredith to register as a student.

He graduated in 1963 and recently published his experiences in a book called Three Years in Mississippi.

Martin Luther King visited Mr Meredith in hospital the following day and then took up the March Against Fear - renamed the Meredith March - which attracted thousands of black men and women along the way. 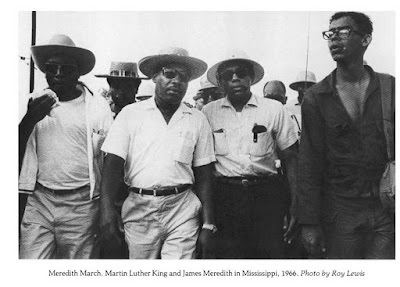 Mr Meredith's injuries turned out to be superficial and he recovered enough to complete the march.

Aubrey James Norvell confessed to the shooting and was sentenced to five years in prison.

Soon after the march Mr Meredith dropped out of the civil rights movement to work as a stockbroker, and then in real estate. In 1967 he became an investor and entered Columbia University Law School in 1968.

That year he also became president of Meredith Enterprises and began to lecture on racial problems. In 1972 he stood unsuccessfully as a Republican candidate for the US House of Representatives. (source: BBC)

History of the Black-White Race Issue
Posted by Ron at 7:23 PM